Making negotiations as well as striking deals is an integral part of the corporate world. The business world is a cut throat one indeed where every company is trying to outshine the next. To make sure that their company excels, the executive board ensures that the individuals hired are ones who are at the top of their game and know exactly what they are doing. It is a well known fact indeed that women are much more skilled at negotiations as well as striking deals. Given here is a list of some of the reasons why women excel at negotiations. 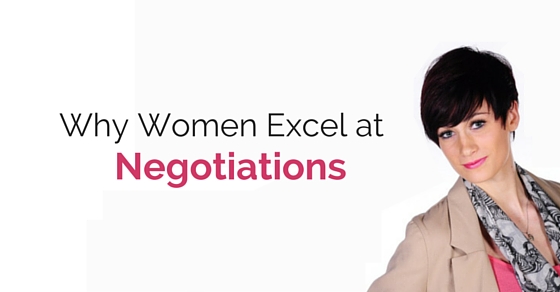 Owing to the fact that women are more in contact with their emotional side than men that they are able to get across their thoughts in a very effective manner without much trouble at all. Men tend to prefer to focus on written or non verbal activity, but as opposed to this, it is no new piece of information that women have a highly superior as well a well developed set of communication skills which they put to best possible use. Women that are skilled rhetoricians and orators find that when they speak well that is half the battle won for them right there.

Men by nature are not very good at managing stressful situations, it is for this main reason that they frequently suffer with heart ailments, high blood pressure as well as stress. Multi tasking is something which they cannot handle with ease. As opposed to this since more often women have to handle domestic as well as professional issues, they are successful in dealing with many tasks simultaneously and do not fret when a stressful situation happens to present itself in the course of a negotiation.

3. They have a ‘tend and befriend’ way of behavior:

It has often been noticed that men have a ‘fight or flight’ approach to negotiations, however women on the other hand have a ‘tend and befriend’ way of approaching negotiations and this approach has proved to be much more effective as opposed to that which men popularly opt for. Both women as well as men have different ways of approaching same situations and this just happens to be one area where women’s approach is able to get the job done in a much more effectual as well as effective manner.

4. Women are more willing to comply and adjust:

Women by nature tend to be much more accommodating as opposed to men. Once men have decided upon something or set their mind on doing things in a particular manner, it is rare that they budge from their position. However women are much more open as well as receptive when it comes to accepting change. The process of negotiations involves a lot of give and take and if you are not willing to bend a little or make few adjustments then you might find that a good offer has slipped through your fingers and you might regret it in the long run.

5. Women are quickly able to adapt their behavior as per the situation:

6. Professional business women know what to say and when to say it:

In the business world having good communication skills often fall short. It is of paramount importance to know exactly what to say and when to say it so as to ensure that your words have a powerful impact on your clients or even on the bosses at the company. This is one area where women absolutely excel, they are able to read situations very well and know exactly what they should say and what they ought not to say at a given time. Since men are not so good at reading situations that is why they often are unable to say the right things at the right time.

7. Men think of negotiating as a waste of time:

In addition to men looking at the entire task of negotiating as something negative, they also think of it as a complete waste of time which they ought to not bother themselves with. Women on the other hand realize that even the smallest of negotiations could go a long way and make a huge difference in the time to come. That is why women try their best to go out of their way to strike good deals.

8. Women put forth their thoughts in a clear concise and matter of fact manner:

Women have a knack of presenting facts in a very effective manner. They are not ostentatious or loud in their presentations, but they are able to put forth all the details before the clients or bosses in a very comprehensive manner such that they are able to make a very informed decision. Women are able to frame their argument in such a manner that it will appear that the most lucrative option for both parties would be to accept the plan of action presented by the woman. This is a key ability that makes women so good at doing negotiations.

9. Women never take no for an answer at any cost:

When faced with the word ‘no’ men will usually accept this as the final as well as binding decision. However women on the other hand never take ‘no’ for an answer at any cost. They think of the word no as nothing but proof of the fact that they have to try their level best to convince the person concerned more of their argument. This is a very positive way of looking at things and it is because of this perseverance to convert that firm ‘no’, into a ‘maybe’ and then possibly even a ‘yes’ that women excel when it comes to negotiating.

10. They never let their ego come in the way:

One of the chief issues that men have when it comes to them making negotiations, is that they are highly egoistic and they take it to heart when what they are saying is not taken into consideration or not accepted as it is. Women on the other hand do not think in this way, rather as opposed to this they ensure that they do not take rejection personally or even as a personal failure. They accept the fact that in the business world, everyone is out to strike a good deal and that is it, it’s all strictly business and there is no intentions to hurt another person personally.

11. Women have intuition and perceptive ability:

It is a scientific fact that women have larger deep limbic systems than men and owing to this they have intuition and high perceptive ability, which enables them to be able to grasp unspoken feelings very swiftly. And in the business world, being able to do this will take you a long way when it comes to making negotiations. If women find that someone is on the edge or closed to being convinced then they try to go that extra mile in order to ensure that the person is convinced entirely. They are also able to read and understand body language well.

12. Women make effective use of non verbal means of communication:

In addition to having good communication skills women are also able to make excellent use of their own non verbal methods of communication. For example they make good use of hand gestures, they smile and they also have positive as well as pro active body language. They ensure that at no time do they let their guard down as sometimes even the smallest of things could turn off the client or the boss resulting in the best of deals slipping through your fingers for a minor lapse .

13. They are always on the lookout for a good bargain:

One key thing that cannot be ignored is that women love a good bargain. Whether they go shopping for clothes or even to the local market to pick up a few fruits and vegetables they are always on the lookout for a good bargain. Owing to the fact that they have so much skill and experience in the area of striking good deals that they are able to do so well in negotiating in their professional life as well.

14. Women are able to connect quickly and form deeper bonds with individuals:

A reason why clients as well as bosses find it so tough to say no to women, is because women are able to connect quickly as well as form deeper emotional bonds with individuals. Often once such bonds have been formed, giving a negative reply becomes an awkward thing to do. It is not to suggest that women do not know where to tow the line in the work place, it merely implies that women in general get personally involved in whatever they are doing and are just easier to talk to as opposed to men.

15. Women are able to create a good impression though their good manners:

Once being visited by a client or talking to a boss about a deal, women have a knack of ensuring that everything goes off in a cool as well as calm manner. They are able to create a very good impression with their mannerisms as well as preparations and this does, even if it is to a small extent help in channeling the mind of the other party in the desirable direction.

16. Women are very smart about going about the process of negotiation:

When it comes to negotiations, women know exactly how to go about it. They are able to frame each word and statement of theirs in an effective manner. Instead of using phrases like ‘you or I’ they prefer to make use of terms like ‘us and we’. They convince the other party that this is a joint venture of sorts which both are embarking upon and it will be a mutually beneficial as well as symbiotic relationship. This is the kind of sense of security and warmth which clients look for.

17. Women do not view negotiations as a negative or derogatory thing:

Men are such that they look at negotiations as something which is negative or derogatory. They think that negotiating is synonymous with other base words like stooping or begging. However women on the other hand do not approach negotiating like this. They look at this as a different way all together and that is one of the key reasons why they do not shy away from doing negotiations, rather on the other hand they love it and feel a sort of thrill when doing it .

So these are some of the chief reason why women are able to excel at making negotiations. However remember that there are exceptions to every rule and with hard work, dedication, training as well as skill, anything can be achieved. To remain a relevant part of today’s twenty first century business world you have to ensure that at all times and under all circumstances you bring your A game. If you begin to deliver sub standard as well as inferior quality work then you cannot expect to do well or get promotions at your work place.