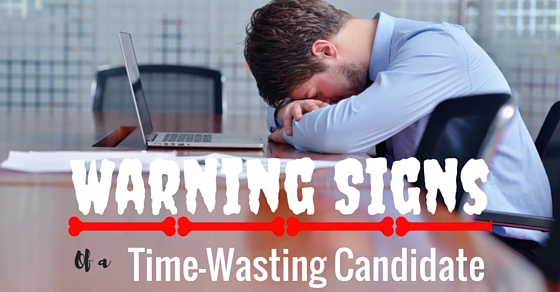 Organizations invest more of time and money for hiring purpose and hence, applicant screening must take as less time as required.

To reduce the time and money that is wasted in employees, the hiring managers must possess the capability to find out the good and bad candidate. It is also never easy to point out a good or bad candidate similar to scanning a resume.

It is hence important for recruiters not to hire a bad egg and waste the organizations time and resources. Listed below are a few warning signs of time-wasting job candidates.

Confidence and arrogance have a very fine line when measured. It would be an attractive quality in an employee when there are a pride and self-assurance in their abilities. At the same time bragging one’s abilities or achievements and presenting self-ego can be a big turn off. This is considered as a warning sign for a time-wasting candidate.

In order to find their footing, almost all candidates opt for job hopping and it is not considered as a negative aspect. But if employees have job hopping as a consistent aspect in their work history then it can be mentioned as a trouble in sustaining the job.

When an employee in the present job is relatively happy then he may not be motivated at times of job change over. These employees are considered as time wasters as they flake when offers are made or they are ready to accept a counter offer from their present employee.

There are employees found in an organization where they make use of the job to get to a good position for the sake of money. Their idea and intention are only money and they are money based employees.

There are a number of candidates who wanted a new job just for the sake of accomplishing their long-term goals. Certain employees would like to go for a worldwide trip or maybe they wanted to start a new business and hence would like to know the strategies other companies may follow.

Candidates who are in need of a job are ones who are ready to accept any kind of job that comes in whether suitable or not. They are also candidates who leave the job when some other better offer comes in.

Incorrect grammar is also another main aspect which is needed for a perfect candidate to work in an organization. Red flags are raised for such candidates because they may seem disrespectful with their communication or they may also seem to be lazy in preparing a professional letter. Hence, these candidates are considered as time wasters.

Almost all job seekers would know that they are in need of an appropriate, captivating and implied cover letter along with CV. There are some candidates who do not take initiatives and get all these done, this shows their laziness, disinterest and lack in commitment. It is very easily shown that a person isn’t interested in his job role when the CV is sloppy or generic.

12. Failure to keep up promises:

There are employees who make promises but never keep them up. for example, they may promise to send an important document by afternoon, but it would not arrive at the manager in the mentioned or promised time.

In the same manner, they may promise for a call, but calls would never be made. It really feels uncomfortable to force or hound someone for certain aspects. These are indicators for wasting time.

Rudeness is something unprofessional to be discussed in a professional environment. But there are candidates who come along the recruitment, HR or career services who are rude in nature. There are many candidates who behave in a self-destructive manner during the interview process too.

Some examples of rudeness would be unreasonable questions, demanding, pushiness, insulting language and more. It is good to get to know about such candidates in the interview process itself so that the organization can avoid investing time, money and energy in them.

Other most frustrating characteristics which are found by employers at times of recruitment are candidates with a stubborn attitude. Such candidates argue in every step they move forward. Stubborn candidates may know more but they still hop from one job to the other with more gaps. This is because they show the same attitude and nature in every job.

When any interviewee is serious about the job it is important that they should get back to the employer within few days. This shows the interest and enthusiasm for the candidate in the job role. When the candidate does not get back to you, this lack of communication is a hindrance and candidates are merely considered as time wasters.

CEO’s cautions managers that, they should not treat resumes as the final decision for the interview process. Their resumes may have mentioned a number of aspects they are good at, but it does not mean that its true and they must be recruited.

It is merely a waste of time when candidates offer very short details in their resumes. Hence, action-based interviews which are based on life-based scenarios that happen in real life and associated with the tasks they perform are to be conducted to pick the best candidate from others.

To make them more attractive to the hiring managers, candidates either buff up or exaggerate experiences in their resumes. The employers can easily distinguish between a harmless white lie and a blatant misinterpretation of any candidate’s experience. Candidates who lie on their career or resumes are considered as time wasters.

18. Does not research the company:

There is an impression of boredom presented when a candidate is a poor listener or fidgeting all through the interview. A candidate is considered as a time wasting candidate when he is not a good listener.

When a candidate changes the topic or avoids answering any questions then they are said to be time wasters. This is because they aren’t good at their skill set and trying to cover up the probed question. The other aspect may be that the candidate has not prepared well for the interview and hence should be raised with the red flag.

Employers usually recruit candidates who are passionate about the role and not just for the sake of employing candidates in the job role. The employers should shoot questions which offer the candidates an opportunity to show their enthusiasm and interest in business and the job role. Some questions to be asked would be “what motivates you now”, “which are the roles that excite you more”, “when do you desire to start with us”.

With the advent of social media, screening candidates have become quite easy. Employers can also have a chance to glimpse over the profiles of individuals through LinkedIn, Twitter or Facebook. By looking through their profiles their opinions and morals can be viewed. By this way, you can gain an indication if the employee is a perfect fit for the organization.

Almost all hiring managers fix a dress code for the interviewing employees. When a sharp suit is mentioned and candidates wear it shows enthusiasm, professionalism and a strong interest in the job role.

When a job candidate does not dress up according to the dress code as mentioned it may be a sign of immature nature, disinterest or may be considered as a casual approach to professionalism.

24. They talk about themselves:

Organizations need employees who are self-driven, independent and also self-starters but it is also important that they are able to work in a team. An employee must be one who is able to refer their team instead of only placing blame on them. These employees must have someone who gives others credit and works in the team.

The employee should possess skill set and a strong background, they should be ones who fit into the company culture and work well with their co-workers. Such candidates are required for an organization and not ones who only talk about themselves.

By this way, we can make out that the candidate has an interest in the organization and committed towards it. Again it is important for the candidate to ask questions which show their enthusiasm and conclude positive decision. But when questions regarding sick leave, holidays, package, paid leave are asked then few alarm bells start ringing in the mind of the employees and it’s just a mere sign of time wasting candidate.

Apart from the lack of communication, there are candidates who are in constant communication. They hound the employers throughout the process which presents a sign of desperation

When a candidate makes a level of uncomfortableness for the employer with constant communication for the new job, then the employer should have to dig deeper for the reason the candidate is looking for a new job.

All these are few examples and signs of time wasting candidates. Candidates should make sure they do not fall under any of these categories so that they are raised with a red flag. By this way, candidates can also get to know the level of expectation of employees and what they need from new candidates.

An interview is one of the best opportunities for any individual to develop his or her career and it is important for candidates to make the best use of it and perform in the right way. The above mentioned are few warning signs for time wasting candidates and hence it is important for candidates to go through it. These hints would help them not to make any mistakes in interviews they perform. Proper preparation along with a smart presentation and perfect answering to the point can impress the employees and help them get recruited.

How to Keep Candidates Engaged through the Hiring Process