In a professional career, there comes a time when one need to make a job change. But when you quit, it is always wise to choose your words with care. Good professionals talk about all the good things that they have learned while working in an organization when they leave. 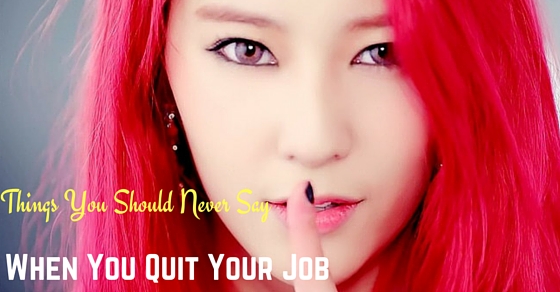 How to Make a Graceful Exit:

1. Don’t say that you are leaving today:

One common mistake that people often make is to quit without offering ample time to their organization to look for a replacement. If you can provide around two weeks, it shows that you are a responsible professional though the company may not need it.

Also, try to find out the time period during which your boss wants to speak about your departure with his employees.

Even if you are not satisfied with your company’s work culture, you should wait for the HR department to find a replacement. It will help you prove that you are a loyal and trustworthy professional of the company. You will thus leave the organization on a good note after your position has been filled.

2. Never say anything bad about the organization:

If you say something foul about the organization while leaving, then you are making it virtually impossible to return to it later. It’s not likely that you will receive a positive reference from the company as a result. This is not a wise thing to do and will create a bad impression about you among your co-workers and management.

Instead, you should say about the good things that you learned at the company. Elaborate on how supportive your co-workers were while you worked on different projects together. It will help you to maintain the trust level among co-workers.

You will be able to leave your organization on a good note as a result. It will be easier for you to resume working under the same organization later if you want to.

3. Don’t question the management skills of your boss:

Insulting the high management will lead you to nowhere. No matter where you work, you need to be cooperative with your boss in order to do something worthwhile.

Instead of criticism, you could say that both you and the management tried, but the relationship didn’t reach the stage it could. However, to avoid antagonizing the management, you can avoid the topic altogether. Rather, speak on how your managers supported you and helped you to grow professionally.

Speak on the new things that you learned which you weren’t familiar with earlier. Doing this will make sure that everybody is happy with your views. You will be able to get good references in other companies as a result.

4. Don’t speak anything regarding the work environment of the company:

Don’t say that the company’s work atmosphere is not up to the mark. Even what you feel is true, your co-workers are not going to like it. Neither are you their spokesperson. If they have to leave, they will do so on their own.

You don’t need to ruin your relationships with them. Maintaining good relations with your co-workers can help you get to know about vacancies in bigger organizations where you can join in the future. Their references will help you to create a good impression on prospective employers.

Instead, leave it up to them and let them decide when they are going to leave the company. You don’t need to speak about the bad work atmosphere at the office on behalf of your co-workers.

5. Don’t complain that your peers were promoted whereas you weren’t:

This is another misconception that many people have. They tend to forget that their progress up the corporate ladder has nothing to do with that of their peers. Complaining about the lack of promotion will only show that you are not aware of your shortcoming.

The staff of the company will also feel that you are not taking any responsibility for the areas where you need to improve. It will create a bad image of you in the minds of your co-workers.

The problem is likely to recur in other organizations where you would compare the promotion of other co-workers with your own. That will leave very little room for improvement and you won’t be able to get over your shortcomings.

6. Don’t refuse to help the company during the transition period:

If you had held a vital position within the organization, then you should offer help during the transition period. Use the timespan which exists between the period that you plan to quit and give your notice wisely.

You may use it to document every little detail for the next person. In case your manager needs you for a demo in a fortnight or a day, try to set an extra day apart for that purpose. Do everything that you possibly can so as to ensure that the person who replaces you has a clear idea about the way to work.

It will help you to leave the organization with a good impression in the minds of the management. On the other hand, if you refuse, the management will regard you as an unreliable employee.

7. Don’t say anything that you want to, about your reasons for living:

You may have joined another organization for more money. That’s a pragmatic thing to do. It might be that there were some serious issues which you raised but were never addressed. But in case you have never addressed the issue before, then your boss might think that you are being unfair. If some issues haven’t been addressed by you before, avoid speaking about them. This might be the real reason why you dislike your boss or co-workers.

In that case, you can say that you came across a good opportunity and you didn’t want to miss it. You can also say that you want to do something else and want to discover new opportunities. So, try to keep your personal opinions to yourself.

8. Avoid writing anything on Glassdoor which can be traceable:

Glassdoor is not the ideal platform where you can write whatever you feel about the company where you are working. Though one can come across factual information there, much of it isn’t the latest. Some details can be incorrect as well. Therefore, when you are posting, make sure that you don’t get identified either by the time or the content that you post.

Try to make sure that even if you post something negative, your company shouldn’t be able to make out that it was you. Getting caught writing negative reviews can lead to your sacking. This might be a cause of great shame for you as you will lose the respect of your co-workers.

9. Don’t complain that you were not satisfied with the salary:

Don’t say that you are leaving because of salary issues. Any statement related to compensation will be taken in negative sense against the organization in your future jobs as well. In such a situation, you will need to think that what you are going to gain or lose by making disparaging remarks about the company.

Unless you have a clear idea about the salary trends in the market, you cannot be sure that your pay isn’t market-competitive. If you still feel that you should speak about your salary, you should say that the other organization was offering you a better opportunity for growth.

The time when you are resigning is not about blaming others. It will not only ruin your relationship with them but also make you look weak and irresponsible as a person. Since there is no point discussing issues which cannot be resolved, focus on the good things you achieved together.

Speak about the ways in which your colleagues helped you in different projects. Tell every one of the different ways in which they inspired you to grow within the organization. This will ensure that everyone is happy with your views and you do not create any unnecessary controversy. Blaming your co-workers will make it impossible for you to ask for their help if any type of need arises in future.

Unless you hold a high management position within the organization, your resignation is not likely to bring a change in its way of functioning. So you are not going to be the change agent which you want to be. So, don’t give a feedback unless you have been asked to. Also, refrain from writing anything nasty on social media as it will put you in unnecessary trouble.

Avoid sending any type of nasty email; it will create a bad impression about you within the organization and lead to your termination. Instead, take your time and wait for the right opportunity that you have been looking for. Once you get hired somewhere else, resign. This will ensure that you don’t get into trouble and avoid unnecessary controversies.