Hiring a perfect, tailor-made candidate is every recruiter’s dream but mostly it remains a dream. This is often because the candidate is not what he or she projects during the 30-minute interview round.

For hiring a close to perfect candidate, it is important to ask the right kind of questions that go beyond the ‘tell me about yourself’ type of questions. Some of these may be funny, irrelevant but yes, they are reliable enough to reveal at least some bit of their character like interview questions that reveal personality.

Some of them are professional related but some may be a bit personal such as knowing the favorite cuisine, restaurant, hobbies, etc. 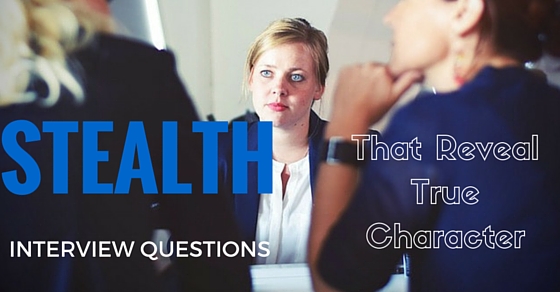 Ideal stealth interview questions about a character are those that are never asked. They are simply stated in a manner that invokes thought processes and self-realization in the candidate.

Such character interview questions can divide into three broad categories based on the timing- as in when it is asked. They can be asked at the beginning of the interview as ice-breakers, somewhere during the process to know the skill and creativity level and at the end on a concluding note when the interview with the candidate comes to a close.

Before a presentation, interview or stage performance every person experiences butterflies in the stomach- irrespective of the confidence or experience level. At the time of walking into the interview chamber, the candidate has numerous thoughts and the stress level is high.

Hence, the recruiter needs to break the ice and make the candidate feel comfortable. Unless comfortable, there is no way that the candidate would throw away the ‘ideal candidate’ mask. Some such interview questions could be:

This is a direct complement to the candidate that would help ease his or her stress level and get comfortable with the surroundings. It is a good question that breaks the ice and the candidate opens up becoming more true to the character.

It helps rid the candidate of ‘I am being judged’ factor and they tend to be more honest and forthcoming with their answers. In continuum with the answer, if the recruiter strikes up a conversation and can extract more from the candidate without too many direct questions, then the recruiter has struck gold. This is especially true for the candidate who seems easygoing but serious about work.

Often candidates are taken back by this question. They think, “What?! Isn’t this interview?”

Two things can happen with this question and they are,

Both the impressions are good.

Asking for a joke is to test the sense of humor which is very necessary for today’s professional lives especially owing to the stress levels that individuals face every day. A serious person must be dealt with cautiously.

A humorous person knows to tackle their boss’ nagging and taunts while a serious person may simply complain against the boss. Often serious persons do not know how to take it easy.

Club the above question with ‘what’s your favorite cuisine’. Food is one of the best ways to get comfortable and develop a bond. Most candidates get comfortable over food and the type of answer they give helps judge the kind of lifestyle they lead.

A candidate once said, “I like Chinese cuisine since they have a different flavor and taste in every dish. No two dishes taste the same way in Chinese cuisine.” Needless to say, the candidate was the most innovative and creative employee on board in the company.

Once the ice breaks and the candidate share a particular comfort zone with the recruiter, it is time to move on. The candidate hired 25% for the person he or she is and 75% for the skill he or she has acquired or possesses.

Hiring is done to do the job they are meant to do and not to make the office a lighter place. Skill related interview questions must be asked in a way that does not make the candidate get uncomfortable or nervous about the answers.

They often grow nervous and go back to the ‘I am being judged’ mode since there is a stress factor on the correct and incorrect answers. Therefore, questions must frame in a completely informal manner such as:

Indirectly the question is ‘How did you use your qualification in the previous company?’ Asking the above question helps a candidate think of various roles that he or she played and the work that they did.

Often candidates grow nostalgic by this question and realize that they have done a lot of good work. This kind of realization helps them build their self-confidence. They grow more approachable at this point. Besides, the chances that candidates fake an answer are much less.

2. ‘What was the most challenging part of the work you have had to handle so far?’:

This is by far the most common interview question asked by recruiters to know the personality trait of their candidates. Another way to handle the question would be,

“Although I am a recruiter, I am bad at people management. How did you handle a team of (number) under you? What’s the secret?”

Revealing the weakness in front of a person gives him or her extra edge and they start talking a lot. Sometimes they share tips in a manner that might appear more dominant to the recruiter. Such a candidate may prove to be good managers.

A well-disciplined professional would know what to talk and what not talk when it comes to ex-boss. However, a rather immature, procrastinating candidate is more likely to bad-mouth their ex-boss.

Some even reveal the identity which is a very wrong thing to do since it paints a not so pretty picture of the boss as well as the candidate in the industry.

4. ‘What type of company would you like to start?’:

If the candidate answers, “This is the ideal company and I would like to start something like this” it means he or she is putting up a pretense. Such an answer look upon as a cliché by many. Creative, smart candidates give an answer that bound to take the recruiter by surprise.

For example, “I want to start a food court exclusively for the corporate since it helps people release their stress and interact with each other in a much more relaxed manner”. This type of answer speaks a lot about the candidate.

For one, he or she is passionate about food, loves serving people, truly understands the ‘stress factor’ in the corporate sector and would like to help to do their bit in reducing it. Such a candidate stands out in the crowd and is an ideal one somebody who thinks out of the box even in an unfamiliar setting.

This is a killer question to test loyalty. Switching jobs is not a wrong thing to do, but it’s the type and number of reasons that must consider. Too many reasons mean the candidate may like to crib about their life’s burdens.

Not all candidates are like that, however while some candidates look for better perks, some look for a better atmosphere and yet some others plain bored.

Either types of candidate are a challenge for the new organization. An ideal candidate would honestly say what went wrong at every organization. It is, however, hard to find such candidates- though not impossible.

Generally, role models are teachers, famous personalities or in most cases- celebrities. Parents go without mention. Parents could be the case only under extreme circumstances.

The previous two sections gave the recruiter a set of answers that speak a lot about the candidate’s personality traits. No interview ends abruptly. It ends on a casual note or a well gestured goodbye and good luck note.

However, if the recruiters interested in extracting a little more then the conclusion can stage a little dramatically just to see the candidate’s reaction to something unexpected. These need not be questions necessarily. They can be a set of statements evoking responses from the candidate. For example:

This is a better way to ask the age old question ‘Why do you want this job?’ On asking what work would the candidate like to do as an employee with the organization would help the candidate picture his or her dream job.

It would also help them do away with any wrong ideas and notions about the job. Often candidates clearly state what they expect from the new job if selected.

This statement comes as a shocker for many candidates. This would trigger their grey cells and they would end up coming with unique ideas on what they could do for the establishment as an employee.

However, the recruiter must handle the question carefully as most candidates grow disappointed and may go to extreme ends which may prove disastrous.

3. ‘You are over-qualified and too creative for the job.’:

An ideal interview is the one wherein the candidate never realizes that he or she interviewed for a job. It should seem like a casual talk between two individuals over a cup of coffee and nothing more than that.

However, for a recruiter, it is much more than that. Such ‘casual’ talks reveal more to the personality than there is as a professional.

It opens the doors for more exploration of the personality. Stealth interview questions that reveal the true character must poise casually by a casually appearing alert recruiter.