Unemployment is a global issue which happens in developed, underdeveloped and developing countries. The major evidence is that even the developed countries are battling with unemployment issues.

A survey has suggested that in 2013 December, about 6.7% of Americans were unemployed.

The government and individuals should take proper remedy steps to solve the unemployment problem and develop the nation’s economy through employment. 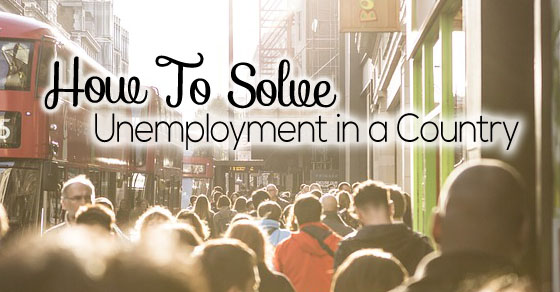 Unemployment can be defined as when an individual is hunting for employment and does not find a job, then unemployment arises.

Unemployment is one of the major crises that happens around. The term unemployment measures the economy’s health.

The reports as per the international labor organization said that about 200 million globally or about 6% of the complete workforce was unemployed in 2012.

In that manner let’s glimpse through a few aspects of unemployment and the various aspects related to it.

The unemployment rate reached a post during World War II to a high of 9.7% in 1982. The data regarding unemployment and earnings was captured by the Department of Labor’s Bureau of Labor Statistics (BLS).

The fluctuation started again and there was a rise in the year 2007 and the unemployment rate was 4.9% in 2008 January. People without a job and looking for work are counted as unemployed. It does not include people who have lost their jobs and not looking for it.

At times when there is a mismatch of skills in the work industry this unemployment occurs. Some of them are partitioned as mentioned below.

This type of unemployment takes place when the wages in the competitive job market moves above equilibrium.

Frictional unemployment also falls under this category where individuals tend to choose a job until they wanted an appropriate one.

The demand deficient or cyclical unemployment takes place when the economy falls below its full capacity. A simple example can be the aggregate demand which falls below at times of recession which leads to weakening in negative economic growth and output.

When there is a drop in the output then the employment of workers will also be less which leads to the development of fewer goods.

There are many firms which move out of the business and result in redundancies in large-scale. There are more workers being laid off during recessions which lead to unemployment.

This is one category of unemployment which takes place due to seasonal change in the job nature. Few industries that are affected by seasonal unemployment are catering industries, fruit picking, tourism, and hospitality.

Youth unemployment is another major concern that is happening. 73 million people are globally neither unemployed nor undertaking education.

Casual employment is the type of employment that comes in, for employees who work on a day to day basis or on short term contracts. When the contract is completed, the employee will get unemployed and that type is known as casual unemployment.

This type of unemployment would not stand for long, as the workers get another contract work or the earlier work gets extended. Most of the places where casual employment exists for people are dockyards, market places, film industry (junior artists), etc.

Here the work of the workers gets completed or lasts for just a few hours or day long and then they get back to the same unemployment position. This process goes on until they find a permanent job. It is very difficult to provide a definite solution to such casual unemployment issue.

Unemployment effects in nations lead to a number of hassles, in that manner let’s glimpse through a few effects of unemployment.

Due to unemployment, there are fewer people who work and earn money and hence only less income tax would be collected. There would be less tax revenue collected by the government and would have a large impact on government finances.

Due to unemployment, there would be a number of people who do not work. The government needs to teach the employees with skills that are required for the present industry conditions.

So it is the duty of the government to spend by training skills so that they match with the latest industry. This is a drain on the government’s economy due to unemployment.

Due to this, the government money is drained again. Government finance is used for providing benefits for people.

At times of unemployment, there is an increased supply of labor for employment in firms. In this scenario, there is a decline in wages as there is a number of people ready to work for lower wages.

By this way, the industries have a positive effect and their variable cost would decline.

Due to the impact of unemployment, there are a number of candidates ready to work and hence, the industries have enhanced choice for employment. They choose skilled labors with more experience.

Few goods in an economy are purchased more at times of lower-income for individuals and these are mentioned as inferior goods.

During the unemployment period, people switch over to purchase more of inferior goods due to low income. Inferior goods owner would have a higher profit and sales revenue.

7. Goods and services on less demand:

Unemployment makes individuals avoid buying goods and services as they possess a very low income. In such scenarios, there is lower sales revenue that leads to a decline in profits.

Though there are many firms that benefit themselves from low wage cost as a result of unemployment, they also need to spend and train employees as they have been out of work for a long period.

Training employees are accomplished with the firm’s resources and time hence, there is an increase in the employee’s cost.

Private savings and benefits are the only sources which people rely on at times of unemployment. They do not spend much and buy only fewer goods for their living and hence, they are pushed to a lower standard of living.

10. Loss of depression and confidence:

Unemployment is a period where people are pushed to depression and loss of confidence. It also affects one’s mental and physical health. Almost all people who are unemployed are lead to stress-related depression and also ill most of the time.

Skills and capability to work are lost by individuals during the unemployment period. The prolonged period a person is unemployed, the more the industries have to train them in order to make them work.

With all this, there should be few policies implemented that improve economic growth.

When there are lower interest rates as mentioned above, they allow individuals to borrow in a cheap manner to purchase a car, consumer goods, and more.

By this way, the interest rates allow the business to borrow money at lower rates which also offers them with capital to hire employees in order to meet rising demands.

These are a few aspects that need to be followed in cooperation with the people and government in order to solve unemployment. National Unemployment rate can be decreased from the nation when planned and implemented in the right manner.

Natural unemployment is a major concern in any country and hence focusing on it is important in order to save the nation from economic decline.

As unemployment affects every individual in the nation, there needs to be proper economic conditions and maintenance by the government. The government should be prepared in order to take the right steps at times of recession which leads to unemployment. The unemployment solutions to the unemployment problem are also mentioned and hence unemployment is an aspect to be concentrated by all citizens of the country.

Unemployment is a major crisis and may bury the economic condition of the complete nation and hence be following the right procedure is mandatory. People who are unaware of unemployment and not sure about the inner details can run through these points and get benefited. Work towards developing a nation free from unemployment.