When the labor force in a country is not properly employed by the economy system then unemployment occurs.

Unemployment can also be mentioned as an individual looking for a job and is not able to find one.

To be unemployed, there are two criteria to be satisfied, the first is that the candidate must not have a job and must be one seeking for employment.

In that manner let’s glance through the different types of unemployment that are prevalent in the country. 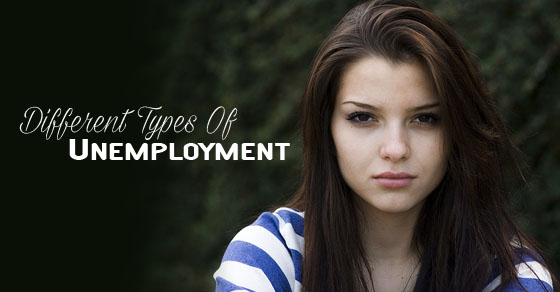 The Natural Rate of Unemployment:

The term natural rate of employment is connected with monetarist economists and new classical.

The natural rate of unemployment can be defined as an unemployment rate that is present even after having a balanced labor market and also comprising of frictional, seasonal, and voluntary unemployment.

As per the structural unemployment definition, the market economies always have some kind of changes that takes place.

In that manner, demand increases for certain job skills whereas others are outdated and mostly less demanded.

A simple example is that after the evolution of automobiles there is a high demand for automobile mechanics and reduced demand for farriers.

In this kind of employment, there is a mismatch in the various categories of jobs that are offered which are related to skills, education, experience, offers, and also the geographical location of the employees.

The sectoral shifts are considered as the main reason for structural unemployment where employment rises in some sectors and falls in the other.

Another example is job openings in the US can be more for financial analysts and nurses in the southwest, but cannot be beneficial if you’re skilled in web design and engine assembly and reside in North West.

Schumpeter mentioned it as something that is good and mandatory for economies that are capitalist.

There has been enhancement in the standard of living through entrepreneurial and technological innovation even as jobs are unavailable. People who possess outdated technologies are unemployed.

If individuals try to get away from the newly developed technologies then the country would have stayed in the previous error without development.

The development of other advanced technologies are ways by which more and more job opportunities are developed.

The negative aspect of structural unemployment is the distraction that takes place due to the shift in employment patterns. The families and communities of few people who work in the declining sectors, suffer.

The human capital of the depreciated ones declines very easily. There is an economic depression caused to the people as they spend less on business and their values drop sharply.

Young and enthusiastic workers who prefer to relocate to other locations for job purpose can be trained on new skills. In the same manner, older people aren’t satisfied with the work and pay they receive and are not willing to replace too.

As per the frictional unemployment definition, this type of unemployment occurs due to the people who try to switch over from one job to the other. There are people who look out for better jobs.

As they are aware of the complete information, it takes time for them to settle down in new jobs and hence frictional unemployment occurs.

In the same manner, there may be people who are moving into new geographic locations and they may consume time to get settled into a new job.

For example in April 2006, there were 7.0 million people who were looking out for jobs where about 4.2 million jobs were available.

It is usually not considered as the best thing when people take up the first job that they receive though they are offered.

It is surely a benefit for everyone, if people take the time to find a job that matches, their skills, experiences and talent and obtains an appropriate job.

It usually takes time to find details regarding any job offer. With all this, more time is used as they have to research about the application process, interview and more.

Economist does not account frictional unemployment as about 2 or 3% is mentioned as inevitable and considered as short term.

The advent and usage of innovative web technology is one aspect that helps individuals reduce the frictional unemployment rate and hunt job quickly.

As employees search for a new job, they rely on the state unemployment insurance programs in order to meet their income needs.

Compensation benefits are present in a number of states where it is half or equal to earnings of a worker.

Qualified workers are ones who can receive this benefit and can use them for about 26 weeks. These programs are supportive and beneficial as it offers more time to find good choices.

As per the cyclical unemployment definition, when there is an overturn in the complete business activity, this type of unemployment occurs.

It is also mentioned that complete unemployment is not the same as zero unemployment. In the market economy, there is certain unemployment that is considered as the efficient labor market.

When there are imperfect information and job shopping then, it is considered as the natural rate of unemployment.

It is during the time of recession that unemployment rises and the products and their demand of businesses drops down. There should be a decrease in this type of unemployment as recoveries take place.

The recession is defined as an aspect where the gross domestic product or GDP falls under two calendar quarters.

The determinations which are made by NBER basically depend on GDP data and they also refer to other indicators such as wholesale retail price and industrial production level.

During the period of 1982, there was less frequent and short recession in the US economy. There was also early recovery which was accomplished by immediate upswings in the employment, where NBER mentioned few recessions which came to an end by 1991 and 2001 which lead to continued job slumps.

In the same manner loss of jobs in the period 2003 after the latest recession was actually mentioned as a jobless recovery. As GDP sprout out, it came out very gradually which offered jobs for a number of new employees in order to maintain enhanced labor productivity.

Unemployment is categorized into 2 forms they are

Voluntary employment is where the individual leaves the jobs willingly and looks out for new jobs.

Involuntary employment is one where unemployment takes place due to people who get laid off or fired off from the jobs and they need to find a new job.

When there is a deficiency of aggregate demand, with demand which is insufficient to generate full employment it is mentioned as demand deficient employment.

Due to the unacceptance of low wages, the workers were blamed and also they insisted for high wages. The other name for classical unemployment is real wage unemployment.

The prevalence of seasonal unemployment is because few industries produce and distribute their goods only at specific times in a year.

Tourism, farming, and construction are a few industries where seasonal unemployment occurs.

In industries where workers are appointed on day to day basis such as agriculture, construction, catering etc. have more chances for unemployment as they recruit employees on a contract basis and can be terminated at any time.

Once the contract of workers ends at specified time, then he needs to find a new job in the same industry which has started somewhere else.

Dockyards are also another place where casual employers are recruited and terminated once the work is over. In the same manner film industry is also another industry where the junior artist works at times required.

At times of introducing new machinery, labor saving devices, following new methods for production may lead to the replacement of employees by machine. This is called technological unemployment.

The main reason for technological unemployment is by the introduction of machinery. This is considered as a temporary aspect.

This can eventually lead to more allied industries and develop more job opportunities and so unemployed workers would be benefited in a better way.

The main reasons for chronic unemployment in many underdeveloped countries are low capital formation, high population growth, under-utilization and primitive stage of technology.

Disguised unemployment is associated with abundant manpower, when employees with very minimal or zero marginal productivity are removed, it would not affect the total output.

For example, a piece of land is given to four people where they are able to cultivate and product in an effective manner.

If there are six workers employed for the same land and two workers do not contribute and their marginal, productivity would be zero. By eradicating these two workers, there will not be any impact on the output.

Unemployment has been a major issue for any country and is measured by the people who are in labor who are unemployed; this is called as the unemployment rate.

Suppose if the labor force is mentioned as 10 million, and there are 1 million people who are said to be unemployed, then 10% is said to be the unemployment rate.

To understand the economy in a better manner, the economist has divided unemployment into the above said types.

By reading through these classification economists find it easy to refine as well as formulate good strategies to avoid unemployment. Achieving full employment is the main goal for any economy and hence working towards it is important.

For a detailed and clear understanding of unemployment, the above-mentioned aspects would be useful.

The main types of unemployment are mentioned with examples above. The reason for the same can offer the readers a clear understanding of the same topic.

The data on the employment status of the population is used for compiling U.S. Bureau of Labor Statistics. The current population survey is used to obtain data for the BLS. About 50,000 households are surveyed on a monthly basis by the CPS for over 50 years. These are few important aspects about unemployment and their types. People who are unaware of unemployment and the various types available can read through this and get updated.