In this competitive world, it seems difficult to understand the criteria that needs to be availed before applying a certain kind of job. There are different varieties of intangible skills that an employer expects in their employee. In the name of, recent development in business market and also because of the rapid competition in the job market, every employer expects a certain level of experienced skilled employees to work in their company. There are considered as an important factor while selecting a suitable candidate. 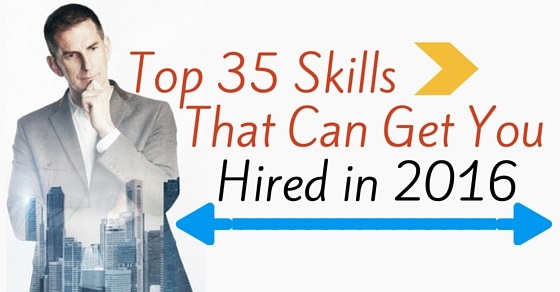 Job Skills That Will Get You Hired:

To avail such skills, all the employees need to know all the checkpoints which consist of such list of skills which can get anyone hired in 2016 and they are as follows.

One of the latest launched element in online learning, which makes the level of understanding better. In these cloud mechanisms, all the employees can undergo some training online before staring a job. It involves all the technical terms of global access.

It is also one of the latest technical skill that every employer expects in his / her employee. Distributed computing is a skill which mainly deals with networks and global access.

As mentioned earlier statistical data mining involves all the important data transformation using technical terms of access and network. These networks help to connect such technology to mine important from the given destination.

Being the most important element of any business or a company, an employer requires such skilled employees to deliver successful marketing campaigns for the overall development of the company.

It is one of the digital form of online marketing. In this search engine marketing, all the products can attract more customers with the help of a small button. It is a revolutionized form of marketing.

An employee availing such skill may be considered important for the overall development of the external appearance of the business or a company. This middleware skill of architecture consists of such skill where an employee should understand architecture most importantly.

Skilled integration analysts are one of the rarest in all the industries. There is even a possibility that most of those skilled employees are poached from one company to another for the sake of their integration of software knowledge.

One of the recent development and most involved level of skill which all the employers expect to see in their candidates. There are several courses which offer such mobile development course for a better future.

A network security analyst is a person who can handle all the network administration, which consists of all the network access data of the company and it helps to understand network format better.

As mentioned its a skill that an employee uses to handle storage system and storage format. There is a possibility that such employees are needed on an urgent basis.

Every authority of the department requires its own authority figure. These authority figures maintain all the outgoing and incoming factors of storage management, which is considered as a storage system.

Web architecture is one of the recent development in architecture, which mostly involved in all the digital elements of technology. It can access all the network for the full disclosure of architectures.

It is a design where it consists of all the engineering of user interface for the machines and their software. These user interface designs help to create a maximum focus of user experiences on some of the digital devices.

As far as warehousing is concerned, it is explained as the storage facility provider, but when it comes to data warehousing then it may be termed as a place of memory storage where all the data or records are stored safely.

These are some of the popular programming languages that have been ruling the software industry for a while now. Not many are adept at these languages, and there’s a lucrative career for those who can code in these languages.

It is a computer program which can be run by a unix program shell and it is also a common line interpreter. As it comes to deliver certain task, it mainly deals with creating a program language where all the shell script is executed.

It is one of the operating programs which mainly deals with computer software and hardware factors. Most probably Linux system works as an operating system which is beneficial for computer hardware and software, but whereas in Unix system its mainly concerned with internet and server systems.

It is a process of creating an act which may be based on the act of virtual elements. The term virtual elements are considered as something which is not real in terms of actual existence.

The Java development program is a program where a programmer tries to program certain database program to certain kind of specified problems. It is even helpful at the time, building a certain level of programming languages.

Electronic engineering is an engineering format of utilizing non-linear and active electrical components. It is an important element while choosing suitable candidates of that particular stream.

It is a process where a computer manages all the relevant activities of hardware and software components of the computer. Similarly, it handles storage, retrieval and some of the updating required to secure data of the computer.

Software quality analysis, as its name suggests is software where a designer can create an application to check certain kind of quality verifying elements of the software, to be careful of all the unwanted virtual elements.

As mentioned earlier, it is one of the part of software quality analysis. In this analysis, the main elements of software would be a user testing manual. This is one of the processes of the central processing unit to deliver their assigned duties.

It is the financial term where in which all the financial elements of the business are considered as the main factor of success. An employer who is well maintained in his / her business or company need to create a financial structure with the help of such economists to make better profits in their business.

This is one of the skill which an employer tries to keep on his / her side at the time actual crisis. There is a possibility that employers search such candidates who are well maintained around corporate law situations so that whenever some tricky situation appears then that chosen candidate could help them out of it.

These skills are needed during the time of uncertain events. It is understandable that an employer needs an employee who will well qualify in that particular stream. And these skills of governing laws can help the employer to be protected of all those financial and business related situations.

And the bottom line is that in this developed competitive world, it is difficult to find that particular candidate who is suitable for one of the particular job and to find such candidate, a person need to be aware of those skills and abilities that an employer is looking for. And one can undergo all the above-mentioned skills and abilities to make sure that he /she can get hired without any issues. So, we would suggest you to understand all the above-mentioned skills that can get a person hired in 2016.