No matter how hard we strive for perfection none of us are perfect. Sometimes in the event of trying to get things done or to achieve something we deliberately or unknowingly happen to hurt a person who is close to us.

So if you are someone who has happened to make a mistake, for some reason or the other, do not beat yourself up about it too much, rather just handle it in a mature manner and go and speak to the person concerned.

Saying sorry is something which is never easy as many looks at it as having to swallow their pride, to help you here are some ways in which you can go about saying sorry for mistakes you made. 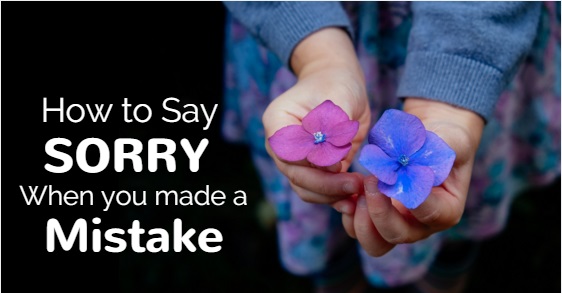 How to Say Sorry to Someone You Hurt?

1. Think about what happened in the first place:

The best way to do this is sit down in a quiet room pondering over what happened and seeing the entire event from an impartial point of view. Doing this might be hurtful as it will cause you to relive the entire incident again, but it is necessary that you do this so that you do not end up apologizing for something which you never even did.

When you hurt someone who is close to you deliberately then it will not go down well with them and they will find it hard to trust you again in the future. However if the person is your friend then maybe he will find it in his heart to forgive, just for old times’ sake.

3. Was it a grave mistake or a small one?

Based on the kind of mistake it was, you should apologize accordingly. If it was a small mistake then a simple sorry does the trick. Yet if the mistake is a grave one then a simple sorry is not going to cut it and you have to ensure that you go out of your way to apologize to the person if the individual is someone who you do not want to lose at any cost.

4. Think about what you are going to say before you meet the person:

Rather than trying to come up with something to say when you have met the person, be prepared for what you are going to say beforehand. Taking out a little time to do this will help you a great deal, just in case you are at a loss for words when communicating with the person.

As a way of saying sorry, there are many people who prefer to express themselves by means of a song or even a poem. So based on where your talents lie you can try to think of a unique way of saying sorry for mistakes which you have committed.

5. Apologizing in person is always the best thing to do:

It is no mystery, that in the present times we are living in a fast paced, technological world. Usually, we communicate much more through our phones and laptops than we do by word of mouth.

Yet if you really want to give a heartfelt apology to someone you should make it a point to do it in person. Saying sorry via a text or an email is just too impersonal. When you apologize virtually, then it is unfortunately just not the same as actually doing it face to face. You should show the person that you really care by meeting up in person.

6. Tell them that you accept your fault for whatever happened:

When you are starting to say that you are sorry to the person concerned right at the very onset you should mention that you accept that whatever happened was your entire fault and that you can understand why he or she is so angry.

State categorically that, had you been in his place you too would have been extremely cross. Saying things like this will really make the person feel a lot better knowing that you at least understand his or her emotions. When apologizing ensure that your tone and body language is absolutely in keeping with your words otherwise there is no point apologizing in the first place.

7. Do not make it seem like you are doing the person a favor by apologizing:

One of the worst mistakes you can make when you are apologizing to someone is making it seem like you are just doing it for the sake of it or even acting like you are doing the person a favor by apologizing.

If genuinely, in your heart of hearts you do not feel like you need to apologize, then you should not. As long as your conscience is clear you need not have to worry about anything. Saying sorry is never easy but if you know the mistake has been committed by you, then you also know that saying sorry is something which you have to do so that you do not end up losing someone who is so close to you and means so much to you,

8. Saying sorry does not mean that you are swallowing your pride:

Many people’s minds are plagued with the misconception that when they are saying sorry, they have to swallow their pride. Saying sorry and apologizing for something which you have done does not make you subordinate or low in any way.

It merely implies that you are someone who is good enough, mature enough and wise enough to accept that you have done something wrong and you are willing to take responsibility for your actions. So do not let this misconception lead you.

9. Speaking from the heart is the best thing to do:

As mentioned above thinking of what to say, will help you when you are going to say sorry to the person concerned for the mistake which you have made, yet this does not mean that you have to practice what you are going to say and end up learning it by heart. If you do this then it will certainly not seem like you are speaking from the heart.

In situations like this mentally preparing what you are going to say is good, but ensure that what you are saying is coming straight from your own heart and is not the brain work of someone else. An apology which isn’t genuine is no real apology at all.

10. Listen to what the person has to say:

In addition to saying all that you have to say and pouring out your heart to the person concerned you should ensure that you give the other person a chance to speak his or her mind as well. When you let the other person concerned speak, then you can get to see things from his perspective as well and you can even begin to understand why he or she is so cross in the first place.

Walking a mile in someone else’s shoes can cause you to see things from an entirely new point of view. Since you have done wrong don’t try to challenge or argue with anything he or she has to say.

11. Do not expect forgiveness immediately:

Just because you have delivered a heartfelt apology and you have accepted responsibility for everything that has happened it doesn’t mean that you should think that the person will forgive you immediately.

Once you have apologized you should not press upon the person to forgive you immediately or any time soon for that matter. If he or she values you as a friend then you will be forgiven as soon as he or she has been able to feel better.

Yet if the mistake which you have done is very grave, then you should brace yourself for the fact that the person concerned may not feel like talking to you ever again.

12. Giving a small present is what many people choose to do:

As a way of saying ‘I am sorry for mistakes which I have committed’ many people choose to give a present to the person concerned. This is not something which is mandatory to do, yet if you want to give a tiny present in addition to your apology then that is entirely up to you. It need not be something which is expensive or flashy, it is just to show the person concerned that you regret what you have done and hoping that you will be forgiven.

13. Sometimes you might need to say sorry more than once:

If you know that the mistake which you have committed was a grave one, then you should mentally prepare yourself for the fact that you might need to say sorry more than once. Yet if you know that the person concerned is a close friend or loved one, then saying sorry even a hundred times should not matter to you at all.

If the person did not love you or care for you so much, then he or she would not have been so hurt to begin with, so this is something which you ought to keep in mind too.

14. Say that you will not let such a thing happen again:

You should make it a point to mention that you will do whatever is in your power to ensure that you do not make such a mistake again. Say that all you want is another chance to prove that you are someone who really does care.

15. Mention that it was never your intention to hurt him or her:

When you are apologizing you should make it a point to mention that you are utterly sorry for mistakes which you have made and that no matter what happened it was never your intention to hurt anyone. Say that if you had a chance to turn back time, you would do things the right way this time around.

16. State categorically that you will do anything to make up for this mistake:

Finally, you should state that no matter what has happened, nothing can be done about it now, however from this point on saying that you will try your best to make it up to the person so that he or she can trust you once again.

Upon going through the list which has been given above, it is obvious that you cannot say all these things at one go, so apologize and say only those things which you think most fitting. If you end up saying too much or going overboard then it might come across as though you are being a little fake or insincere.

If after all your efforts, you notice that the person concerned is not willing to forgive you for something which you never intended to even do or for something which isn’t even a big deal in the first place then maybe you should stop apologizing and realize that there is nothing more that you can do in order to get things okay once again.