Preface forms a vital part of the project work. It is the introductory paragraph which describes about the literary works the author has talked about in the project. It also contains the acknowledgement of all those who helped in making of the project. So, in order to write the preface for project work, follow the following tips and guidelines: 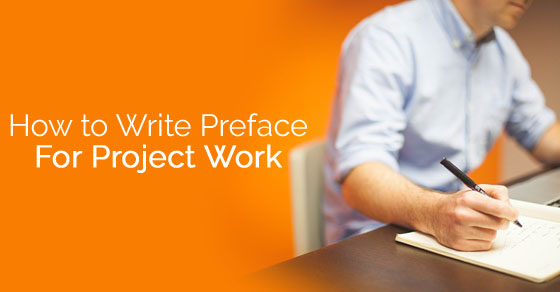 It is an introduction to the main text of a book written by the author which typically stats the scope, subject and explains its purpose.

How to Write a Preface Page:

Writing a preface will be easy only after writing book and it is front matter that can be short or long as per your convenience. It is a place where you have to be honest and clear to your readers regarding the writing of the book, either it might be a biography or a fictional story.

You have to create interest in the book with it so that readers will show some interest in the author and also about the work created by them. By this reader are automatically drawn to the preface.

You have to clear state:

1. Give the description of the project:

The preface is about describing what the context of the project is, all in general lines. You need to tell the readers what is the main idea behind the project work. While describing make sure you do not reveal too much about the project.

Leave some room for the mystery, so that the reader finds the mystery by going through the whole project inside.

2. It is the type of introduction:

3. Explain the reasons why you chose the specified topic for the project:

In this part you can explain the reasons why you chose a particular topic. What was the main idea behind and which factors forced you to take a complicated task, must be explained as it intrigues the readers and also arouse interest to go through the whole project. Whatever the project is, just make sure you give a good and real description of everything.

4. The purpose behind making such project:

The reason why you chose a topic should be explained in a detailed manner. The main reason and the purpose behind the making of the project must be described clearly in the task you took to complete.

5. The benefits one can get after reading the article:

You need to explain in the preface about the benefits the readers can get after going through the project. Also, you can write what is different from the project than other projects.

Only something different will make the readers go through the whole project but before that, one will read from the preface.

6. Refer to your target audience:

The preface must have one paragraph in which you explain about the target audience, the project is meant for. What kind of people you had in your mind while making the project, what queries you had in the mind while you prepared for such a project, must be given in the preface.

Also to make preface more appealing, you can add a few questions you had related to the project and also related to people you are targeting for the project.

7. Explain the reasons why you did the project:

The reasons like whether you were familiar with the topic, or you were interested in the topic, you longed to work on such project for very long or something like it was close to your heart due to domestic reasons, etc. can be detailed in the project.

Such things bring readers closer towards the project and certainly, they make an effort to experience the project through the reading. So, it is essential to pen down the reasons you did a particular project.

8. The assistance you received from different resources:

What kind of help, you took to complete the project? Like the resources, you made use of or the books you referred, the technologies you made use, websites, articles, blogs you read for completing the project must be mentioned.

By writing all such, the project becomes more authentic for the reader to believe and also the credibility of the project increases.

9. Talk about what inspired you:

What was your inspiration for doing such a project can also be mentioned in the preface. The source of your information needs to be told to the readers as the readers like to know all such things before they move ahead with reading of the project; say it to be a book or any article, etc. It interest readers know the inspiration, the sources, the struggle you made to accomplish the project.

10. The time span you can mention:

11. Explain how you feel about the work you did:

What you felt while doing the project, how this project helped in your knowledge, talk about what you have learned while you worked on the project. How it helped you as a human being and how the project will help the readers if they will go through the project work.

Writing the feeling in the preface is something that adds a personal feeling with the work. When the readers will read the preface, it will look quite interesting as more of personalized experience is explained that lures most of the readers.

What problems you faced while doing the project should also be mentioned along with the advice that should be given to the readers on what points they should keep in mind if they do something akin to this project.

Tell them the limitations of the resources you used and also give guidelines on how to take care while doing the project work.

13. The incidents, the experiences in the preface:

In the preface, pen down all the incidents you had gone through, along with the experiences you got. This makes the preface full of life and the readers will be interested to have a look into the project work.

14. Be thankful to all those who contributed:

You need to acknowledge all those who worked on the project. This is called attributing the sources, the people who helped you in the whole process. Expressing gratitude while you write the preface is something which helps people encourage and also it is included in the virtues needed for an individual. Not just this, it also lets people learn the value of the teamwork.

15. Write everything in paragraphs:

When you write the preface write in the paragraphs. Each paragraph should be different and should have something different. Do not write in an essay type format or it will make the preface look very dull and monotonous. So, write in short paragraphs. Do not repeat anything and write clearly.

16. Do not scribble the words:

When you write the preface, make sure you do not scribble while writing. Scribbling will only reduce the effectiveness of the preface and can give you assurance of reduced readability.

Do not write long and complex sentences. The sentences you write should finish in one breath and should not be complex or compound in nature. The short sentences should say all as the complex and the compound sentences only create confusion in the mind of the readers.

The initial page if will have a number of errors, then the value of the project will reduce to a larger extent as the first page puts the first impression and if the initial impression is not good, certainly there will not be any chances of moving ahead in the project by the reader.

So there must be no grammatical errors, no repetition of the words, no spelling mistakes, especially when you write the names of the people who contributed their efforts in completing the project.

Get the Free & Quick Proofreading tool by Grammarly! Instantly proofread your texts and correct grammar and punctuation.

19. Talk about the organization of the project work:

You can talk all when did your company started, what goals it has achieved, what more are about to come and also why the company chose such a project to put forward to the viewers or the readers.

Follow the steps while you write the preface. For example, first say about the company, initiating it with the name of the company, then its goals, the criteria it followed, then about yourself, why you selected such a topic to work on, then the efforts you made, all what you learned while making the project, thanking everyone who assisted you, and everything that you would like to share with the readers and the viewers of the project. Maybe something hidden is there that you want the public to know at a large scale, the preface is the right platform.

21. Give external information if you have received any:

22. Give the modules your project is divided into:

The modules mean the parts in which your project is divided. Your project may be divided into different parts and if it really is, then mention it in the preface. If you wish, also tell why you divided the project into the modules or the parts.

What you thought while doing the same and from where did you get the inspiration to work by dividing the content for the project.

The words should neither to be too simple not be too technical, but soft words can do wonders. So, make sure you keep in mind the type of words you use while doing the project and especially writing the preface for the project.

Here the pictures are not of the celebrities, but of those people who contributed to the project. Along with their pictures, you can write down the designation, their achievements in a brief while thanking them for their dedicated efforts. Although the preface is all in written and makes the thing little boring, but the pictures can add some tint of interest in it, luring readers like a magnet towards the project.

Also, you can get the signatures of those people down the picture. Making use of the pictures, the signatures and the designation gives a professional touch to the work and indeed it is good to create impressions in the mind of the public.

The above are some of the points that one must keep in mind while writing the preface of the project work. You need to work in a professional manner and if you are willing to put your best into the project, then certainly you will want to initiate the project with the professional attitude only.