Every acknowledgment letter is written for the sake of recognition of the authority to the concerned department who have taken responsibility to deliver their work accordingly.

It is a printed form of a written letter from the concerned department to provide recognition for the work they have delivered on a particular assignment or project assigned to them.

These acknowledgment letters can be considered a letter of appreciation for the department rendering services on such projects. Below mentioned guidelines are some basic tips on how to write acknowledgment for project work. 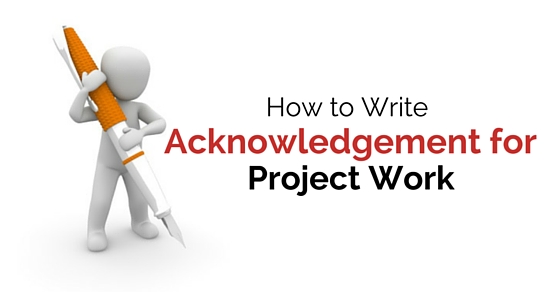 Guidelines for Writing an Acknowledgement for Project Work:

There is a format to follow while writing an acknowledge for project work, and these guidelines should be followed while writing it in a format.

1. Outline of the letter:

An acknowledgment for a project report is a form of showing certain recognition for their extraordinary participation in that particular project or assignment. By stating a clear outline for the acknowledgment letter, a person can brief it effectively.

A draft letter should form to understand the actual content of that particular acknowledgment letter. A draft letter helps to underline any kind of mistakes in the final draft of that letter.

While writing an acknowledgment letter one needs to understand that the purpose of it is to acknowledge the efforts of other departments that have participated in that particular project or assignment.

Showing some sincere acknowledgment in that letter can be expressed in a better manner. Sincerity, while writing an acknowledgment letter makes it more responsible and effective.

4. Mention the name and address of the concerned person:

So that the recognition should maintain by the person whose contribution to a particular project or assignment valued. Every single written letter needs to state along with an address and the name of the person to whom it is concerned.

Letterheads consider as an official seal of that particular project holding organization that requires to acknowledge the effort of another organization and treated as a compulsory or necessary act of acknowledgment.

An acknowledgment letter drafted for the sake of respect or appreciation towards their work on such a project or assignment.

Every acknowledgment letter needs to submit to the concerned department as soon they send a person their completed project detail documents.

Every official letter must have a header which consists of all the details about the letter writer’s name and address and along with that the name with full address of the recipient that to whom it addressed. Following a proper header format can bring an official statement to that particular acknowledgment letter for the project.

Name and address of the sender
Recipient’s name
Address
Date

As mentioned earlier, an official letter should consist of the body as well. An acknowledgment letter needs to write in a certain format. These formats considered according to the body of any letter format.

The closure of any official letter should end with thanking the project owner who had given this opportunity to the concerned department and also with the appreciation of the completion of project work.

Enclosed (optional)
To end this discussion, we would state that every official letter whether it is an acknowledgment letter, appointment letter or any other letter must have a certain format of presentation.

These formats of presentation are necessary to present the actual content of any kind of official letter. Therefore, to follow a certain format of acknowledgment letter, a person can follow all the above-mentioned steps to present an official acknowledgment for project work.