The working environment is something which has people from different culture, different age groups, and almost different mindset entirely. So, conflicts among colleagues are very common and it picks up easily.

Right from colleague who does not respond at the right time to a colleague who steals client document, there are thousands of issues which picks up easily every day. Even though picking up battle happens common, the trick is to know which one to take up forward and which one to not address.

Every individual should know which to pick up and which one to leave and move on. Read this post carefully to know the tricks behind to find exactly the issues worth going over a fight or to drop. 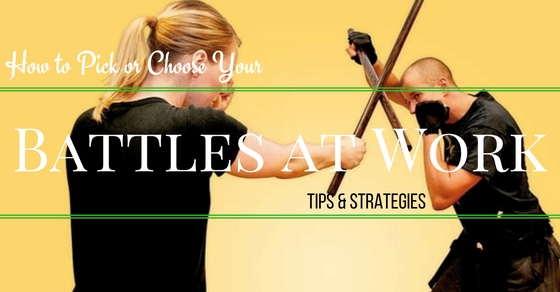 Tips for Pick Your Battles:

Picking up a battle is worth knowing the entire art of handling and then to proceed. Before knowing the right issue to pick up, it is better to examine the motive of the other person and the real worth of the issue. Tackle only the issues which need some necessity to proceed. Here are the few most important things to ask yourself before you pick a battle.

1. Are you intimidated because of personal feelings.?

Not everyone in the office can be good friends or neither good colleagues. It is natural that even though we do not know the person fully, we develop a dislike for them seeing them from far.

But it is very important, to make sure all these personal feelings should not take you to a situation to pick up a battle. Yes, might be because of the character mismatch you tend to get more irritated but it is not fair to take up small petty issues because you do not hold good regards for the other person.

There are a lot of many chances to pick up issues when you start cultivating a negative image for that person. Heated arguments get raised not because of the issue but because of the negativity which developed about the person. Hence, be careful and verify whether you have a complaint because of the work and not anything personal.

2. Will this issue have an impact on my character in the office?

Once when you raise your voice or put your demand in an argument tone the way people see you will differ entirely. Hence, being a sport is very important than picking up issues in a loud tone.

For example, there are many chances you might want to complain about your company policies or you are against a few employee’s work styles. But before proceeding directly to the human resource or the concerned person, make sure your argument is worth and cross check yourself whether you have gone such situations before.

Human minds quickly judge a person before they here the argument we put up on the other person. So be conscious and ask yourself about your image before you proceed.

3. Will I be able to do better than I complain.?

There are many occasions where you dislike the software installed in your office desk, management team’s approach or your organization’s human resource policy.

Before complaining or judging their inefficiency make sure they do not point at you or be confident enough that they do not complain about your working style. This is very important before picking up a battle. Once an issue is raised, more than the issue people tend to analyze your attributes than the issue.

So, there is no point raising voice against unproductive things or do not vent out your emotions when it does not have any impact. And you should be ready to work more than they expect once you react to office battles.

1. Plan well before you step into it:

Planning is very important before you raise an issue. Make sure you plan how to put words in the right way and also analyze and think wisely from the listener’s points of view. This will help you to win the issue as you have already estimated the outcome.

2. Take care of your emotions:

When you raise a topic or an issue in office it is very important to control your emotions as it will have an impact on your character. It’s natural for you to tend to lose patience or use a very common language to talk as you lose your temper. But this cannot be justified as colleagues around you will see the way you behave especially when you pick up battles.

3. Be prepared for handling criticisms:

4. Pick up a battle with someone who has hands-on it:

Before you take up a conflict, analyze whether you reach the right person for the battle. There is no use in having a conflict with a person who cannot have a kind of power on it.

For example, when you’re not happy with company policies it’s of no use picking up a battle with the manager. The right person is from the human resource department. So, analyze and pick up a battle with a person who has the power to change it.

Once when you find things are not right, you intimidate by a person, or an issue tries to fix immediately. There is no point in complaining or having a heated argument when it’s outdated. Take the steps immediately. Show your disagreement before it becomes a big issue.

6. Get a second opinion from most trusted colleagues:

Every individual has an outlook to view an issue or a battle. Sometimes when we are out of control or very angry we cannot make a decision. So, before you pick up a battle discuss it with your most trusted people around you so that you get more clarity out of the issue.

Strategies to Choose Your Battles Wisely:

1. Do not come up with an issue if you do not have a solution:

It is a natural tendency for an employee to get intimidated by many things that are not up to the expectations or which are not committed by the organization or a colleague. Remember everyone has troubles and it is not right to pick up a battle when you do not find a solution. So, think twice about the net result before you pick up a battle.

2. Do not raise fights when it is not up to your standards:

Yes, there might be many inconveniences in your workplace. Being an employee you need to raise your opinion. But consider thinking twice about your position. You might be a manager or an employee of the junior level. You should know what impact it will create concerning your position before picking up a fight.

3. Do not pick up a battle which does not belong to your area of work:

Even though you affected by certain issues directly you need to think twice before you pick up a fight. The reason behind this is, sometimes there might be many priorities for higher officials to take care of than things that do not come under work. So, never bring a conflict with higher officials or any colleagues who are out of work or your responsibility.

Yes, you might find the person doing something inappropriate who already has an issue with you. It is advisable not to bring up a fight as already you have some conflicts. There are a lot of many chances the fight might go personal or it can be seen personal. So, give up or move away from conflicts from whom you do not go well with already.

5. Do not take up a battle with people who are far more higher officials than you:

Before you decide to raise an issue, make sure you do not raise your opinion who is very powerful to take action against you. This is because there are a lot of chances of conflict of thoughts. And it is the human tendency to use power to make others accept their opinion. So, it is advisable not to pick up an issue with a person who is very powerful in your organization.

Hope this post helps you to understand better how to pick up a battle at work very thoughtfully.