Feedback is the best way to know the output of the work done. It shows whether the work was done in a proper manner or not. It is also the way to control the things in an effective manner. Feedback can be positive as well as negative. Positive feedback is always good and acceptable, but it becomes difficult to handle the negative feedback as it causes disputes at times in the office. So, in order to give negative feedback in a positive manner, know the following points: 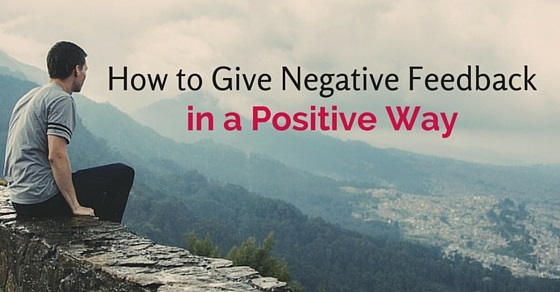 How to Give Negative Feedback Properly:

The following mentioned are few tips to give negative feedback in a positive way.

1. Start with the praiseworthy things:

In order to give the negative feedback make sure you give a good and exciting feedback and this could be done only by starting with the praiseworthy things. Do not directly take a toll on that person by just giving negative  feedback or the blistering remarks. Handle the situation by starting with the good words as it gives confidence of hearing to the listener.

Talking face to face solves a number of problems and can also replace the interpersonal communication between the individuals, not even the digitalization. So, if you have to provide the negative feedback, make sure you talk in person with a person. Do not opt for the emailing process.

Whenever it is about saying negative things, be brief, short and very crisp. Do not cook stories out of the little mistakes done as it will only threaten the situation and will give birth to the tension in the office. So, come to the point immediately without beating about the bush.

Feedback should be given instantly, especially when it comes to the negative one. The moment even is over, just tell the respective person about your opinion. If you delay the feedback, the person may take it for granted and your feedback might not create a long lasting impact. So better not to delay, instead provide feedback immediately.

Bear in your mind that you will most probably speak about the positive things first. Even if you did not like anything about the event, exploit the brain to at least find out one reason to know what was the best part of the event. Of course, there could have been something which excited too, maybe a little, so, make sure you go along the lines of positivity.

6. Start it with an honest one:

Be honest and also start with the honest compliment. Be it negative or positive. If it is positive, then it is completely fine, but if it is negative, sugar coat it dude, you are the sweetest when you have to say something critically to the one may who you don’t admire.

7. Reach the root of the issue:

Knowing the whole lot of problems is indeed necessary. So reach the root cause of the issue and let you know what in actual the other person thinks. You should know about how the other person perceives the problem and this could only be done by putting forth the queries.

Ask a person to have a talk and say that you want to have a word related to the event. Asking permission will set the person right and will also create an alert that some critique is coming and also the person becomes aware. That probably is a good approach to put forward the negative approach ahead.

9. Make sure what you say has something to be achieved:

Whatever you say, especially regarding the negative feedback, it should help an individual in achieving from the same. What you speak should be understood practically and also should be of use to the listener, or it will keep the situation intact.

Following the sandwich means first saying something positive, then saying something critique, then moving again to something better. This approach is acceptable in theory, but not in practice. This way will only incite the person and the situation will turn tense. You are assigned to give the not so happening feedback in a positive manner. So concentrate on that and do not play the sandwich games.

11. Be clear and if possible speak fast:

If you are clear in your thoughts, every kind of negative criticism is acceptable as it shows that you had some knowledge regarding the matter and the listener may take it positively, thinking to improve himself the very next time. Speak fast and do not stumble while you speak the word. Just be confident and clear. Be simple in words as you are addressing the feedback for employees and not taking his or her test of whether he or she knows the words you are speaking. So keep this thing in mind and then plan to give negative feedback.

12. Create magic in your questions:

If you do not want to be direct, you can mold the questions in a smart manner. One can ask like this, are you aware that the people out there are perceiving you harsh? Do you know that you could be easily perceived as irritating. Do you know that the dress you are wearing is not promising and promoting the polished image. Like this, one can give negative feedback in a positive manner.

If you have a hot head, you are likely to burst. Do not do this. Just take a deep breath and do not over think. Overthinking will destroy the peace of mind and will not result in anything fruitful. Keep yourself cool and happy. Try and make reasonable chat with the person and ask the conversation healthy enough to be discussed in the future if ever needed.

14. Train yourself to see different behaviors:

You will come across different people with different behaviors in your whole lifetime. Train your mind, according to that and try to think another person’s way. How that person thinks and how will the person perceive the feedback given by you.

15. Praise in public, but criticize in private:

When it comes to saying something bad or negative, it’s an inbuilt human nature of being aggressive. But you don’t have to be aggressive, just remain cool and focus on what you have to say. Whatever you say should go in interest of the listener’s subject and you should also remain on the track.

17. Give the feedback individually and not in group:

When it comes to providing feedback, give it in a private and not in a group. Negative feedback mostly should be given in private. Saying something in a critical manner is taken as an insult when spoken in front of many people. So make sure you inform the individual that you have something to say regarding the event, the person himself will understand and will agree to talk. Also, be polite while giving critical feedback.

18. No comparison should be done:

You should not start the comparison while giving feedback to employees. Just give your own opinion to the person and do not compare one with the other individual as everyone has his or her own identity. When comparing, the feeling of inferiority comes and make sure your words do not let the person feel inferior.

19. Be willing to get the response in return:

When you provide the feedback to the individual, you may also get the feedback in return. So, make sure you are ready to get the answer or the negative response in return. The person may put forth the query or may ask the solution to what you said, that time you should have the solutions too.

20. Come up with the solutions also:

So, above are some of the methods by which one can give negative feedback to the staff in a very healthy and positive manner. Giving and receiving feedback on performance is good as it helps in evaluating the progress and also the mistakes, flaws are properly known. Giving good feedback always provides a scope for growth. So, in this manner feedback helps in growth as well as good progress.