Finding a job and preparing an attractive resume is one of the important stages of everyone’s life. But while preparing for an interview and resume writing, a person needs to focus on certain elements of the professional resume like their contact information. Many applicants fail to include properly their phone number on a resume. 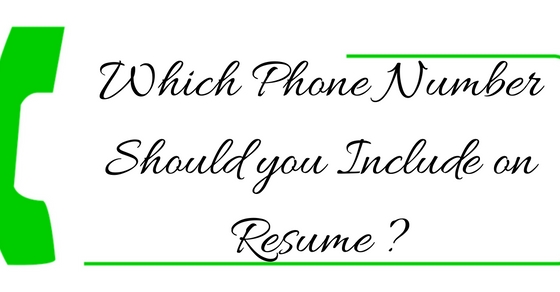 How to Include Phone Number on Resume?

While including personal information, a candidate must think of adding his contact details so that the company can contact the candidate if he is selected for the job, but here the question is which contact number should a person include in his resume.

People often confuse with, should they list their home phone, work phone or cell phone number on a resume? Therefore, to clear out that confusion read our guide to listing contact information on a resume!

1. Using the cell phone number on a resume:

Most people consider using their cell phone number on their resume, and that is because they carry their cell phone everywhere with them, there won’t be any chance of missing such important calls.

Using cell phones avoids the chances of getting lost in the process of interview selection. As people carry their cell phones everywhere with them, it is a quite convenient way of contacting someone anytime and from anywhere.

Some people write their contact information in more than 5 to 6 lines. But, you don’t need to write words to describe your address, phone number, email, etc in your resume

Some people have a habit of keeping another number in case of emergencies, such numbers like when a person contacts to one’s regular number and he couldn’t get in touch with that person, then they should use those emergency numbers given to contact them if it’s something urgent.

Therefore, it is always advisable for all the candidates that they should include a number which they give others when it’s something urgent and one cannot reach out through one’s regular number.

4. Use a number with voice mail facility:

Commonly, some people use their telephone number and cell number in their resume, in case of any personal and professional emergencies.

But it is always better to use a number with voice mail facility because if one of the devices won’t be available on call, then it should automatically allow the person calling to leave a message in case of emergencies.

And once they are available on the phone, they can call back that person after receiving the voice mail precisely.

5. Always answer your calls yourself:

There is a possibility that if someone important calls to one’s contact details given, and all of a sudden someone else picks up the calls it makes things uncomfortable for that person keep contacting to that number.

Therefore, while including house or office numbers one should make sure that they only should attend those calls by themselves instead of others. And that is why it is better to provide a number which can be answered by the person who provided the contact details.

It is advisable for most of the candidates that while writing a resume a candidate needs to include their cell numbers instead of their house telephone number.

The reason behind that one should avoid using home contact numbers because there is a possibility if one of the employers contacts the candidate through their home number, then family members can mislead the employer and in that confusion, the employer can reject the candidate without any such reason.

7. Always find a quiet place to return a call:

It is a possibility that one person attended an interview and even the employer is interested in selecting him for the position.

Instead of that, the candidate should provide them the cell phone number or if one doesn’t have any residential number, then they can inform the employer to contact them through their Email address.

9. Include the current official number only if the candidate is available on the phone:

There is a possibility that a person might be interested in switching his job and trying to attend the interview simultaneously while working with another company. Therefore, during that time the candidate needs to include his desk official number and make sure that only he attended his office phone.

If someone else attends his number, then the candidate should avoid including such an official number on his resume.

It is not necessary that a person need not include his home number in their resume, but while entering their home contact number a candidate needs to enter their available time at home where the candidate can be available on the phone instead of his family members.

Therefore, it is always better to make sure that while entering a home contact number a person need to provide his available hours at home to avoid unnecessary delay in conveying the important messages.

11. Never enter a cell phone number with a bad network:

There is a possibility that the candidate might have given his cell number in their resume, but because of a bad network, the employer might not reach the candidate.

Therefore, to avoid such a situation the candidate needs to provide a cell number with a good network connection and change their bad network providers for their better communications availability anywhere and anytime.

Finally, the bottom line is that with the help of discussion over which phone number should one person put on their resume, a candidate can make his decision easily by reading and following all the given tips about choosing a correct phone number which can be included in the resume.

Therefore, this discussion helps all the interested candidates with their resume writing, especially with their personal information and contact detail inclusion.