Gender bias is the most common and bad practice done in many of the companies. Celebrating women’s day and talking on women empowerment will not help you or result in anything. Change is what today’s women require. 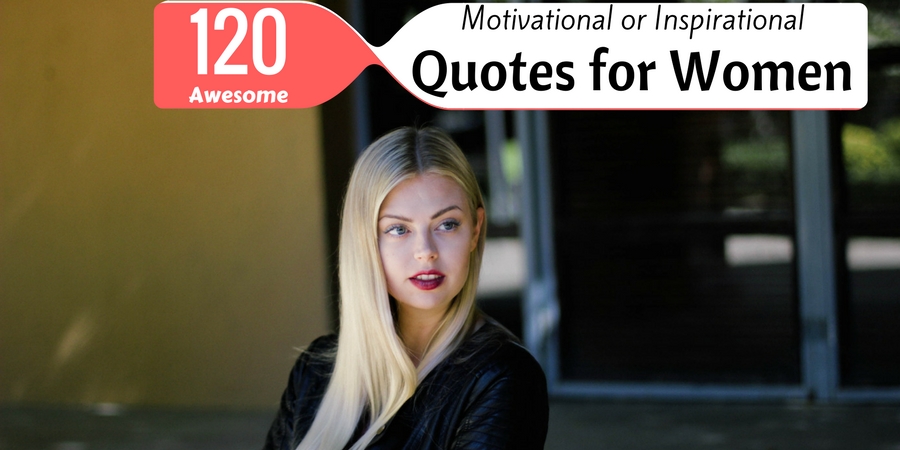 Women nowadays are in every sector that too very successful. They should not be just limited to or bidden within household chores. Though we are in the 21st century still in many places women are not allowed to work or do as they like. This lack of freedom is what they always get.

Being civilized and educated does not help if one does not behave in such a way. The following mentioned are a few inspirational quotes from women that help them to get inspired and help them believe that they are not inferior to anyone.

1. “If I stop to kick every barking dog I am not going to get where I’m going.” – Jackie Joyner—Kersee

2. “You are the one that possesses the keys to your being. You carry the passport to your own happiness.” – Diane von Furstenberg

3. “Success is liking yourself, liking what you do, and liking how you do it.” – Maya Angelou

4. “Cautious, careful people, always casting about to preserve their reputations can never effect a reform.” – Susan B. Anthony

5. “Make the most of yourself by fanning the tiny, inner sparks of possibility into flames of achievement.” – Golda Meir

6. “I didn’t get there by wishing for it or hoping for it, but by working for it.” – Estée Lauder

7. “The most difficult thing is the decision to act, the rest is merely tenacity.” – Amelia Earhart

8. “You can waste your lives drawing lines. Or you can live your life crossing them.” – Shonda Rhimes

9. “I hope the fathers and mothers of little girls will look at them and say ‘yes, women can.’” – Dilma Rousseff

11. “The way we talk to our children becomes their inner voice.” – Peggy O’Mara

12. “Success isn’t about how much money, it’s about the difference you make in people’s lives” – Michelle Obama

13. “If you don’t like the road you’re walking, start paving another one.” – Dolly Parton

16. “One cannot accomplish anything without fanaticism.” – Eva Perón

17. “It took me quite a long time to develop a voice, and now that I have it, I am not going to be silent.” – Madeleine Albright

19. “Step out of the history that is holding you back. Step into the new story you are willing to create.” – Oprah Winfrey

20. “What you do makes a difference, and you have to decide what kind of difference you want to make.” – Jane Goodall

21. “I may be wearing makeup, but I can throw a fastball by you at the same time.” – Jennie Finch

22. As a leader, it’s a major responsibility on your shoulders to practice the behavior you want others to follow.” – Himanshu Bhatia

23. “A strong woman is a woman determined to do something others are determined not be done.” – Marge Piercy

24. “Drama is very important in life: You have to come on with a bang. You never want to go out with a whimper.” – Julia Child

26. “Spread love everywhere you go. Let no one ever come to you without leaving happier.” – Mother Teresa

27. “Take criticism seriously, but not personally. If there is truth or merit in the criticism, try to learn from it. Otherwise, let it roll right off you.” – Hillary Clinton

28. “You should treat your marriage like a business that you wouldn’t want to let fail.” – Lisa Ling

29. “No one can make you feel inferior without your consent.” – Eleanor Roosevelt

31. “A woman is the full circle. Within her is the power to create, nurture and transform.” – Diane Mariechild

32. “Don’t be afraid to speak up for yourself. Keep fighting for your dreams!” – Gabby Douglas

33. “If you obey all the rules, you miss all the fun.” – Katharine Hepburn

34. “Forget about the fast lane. If you really want to fly, just harness your power to your passion” – Oprah Winfrey

35. “Life is not measured by the number of breaths we take, but by the moments that take our breath away.” – Maya Angelou

36. “Take any challenges as a creative opportunity.” – Alexandra Watkins

37. “It’s possible to climb to the top without stomping on other people.” – Taylor Swift

39. “We can do no great things, only small things with great love.” – Mother Teresa

42. “Power to me is the ability to make a change in a positive way.” – Victoria Justice

43. “No matter what you look like or think you look like you’re special and loved and perfect just the way you are.” – Ariel Winter

44. “Oh, How i long to run away from normal days! I want to run wild with my imagination.” – Anonymous

50. “No country can ever truly flourish if it stifles the potential of its women and deprives itself of the contributions of half of its citizens.” – Michelle Obama

51. “No matter how senior you get in an organization, no matter how well you’re perceived to be doing, your job is never done.” – Abigail Johnson

52. “I think the truth of the matter is, people who end up as ‘first’ don’t actually set out to be first. They set out to do something they love and it just so happens that they are the first to do it.” – Condoleezza Rice

53. “The way you tell your story to yourself matters.” – Amy Cuddy

54. “What I do for my work is exactly what I would do if nobody paid me.” – Gretchen Rubin

56. “We realize the importance of our voices only when we are silenced.”– Malala Yousafzai

57. “I would rather be handsome for an hour than pretty for a week. ”— Tilda Swinton

58. “Instead of looking at the past, I put myself ahead twenty years and try to look at what I need to do now in order to get there then” – Diana Ross

59. “I have come to realize making yourself happy is most important. Never be ashamed of how you feel. You have the right to feel any emotion you want, and do what makes you happy. That’s my life motto.” — Demi Lovato

60. “Don’t compromise yourself. You are all you’ve got. There is no yesterday, no tomorrow, it’s all the same day.” – Janis Joplin

62. “The first problem for all of us, men and women, is not to learn, but to unlearn.” — Gloria Steinem

63. “Everyone has inside of her a piece of good news. The good news is that you don’t know how great you can be, how much you can love, what you can accomplish, and what your potential is.” — Anne Frank

64. “You grow up the day you have your first real laugh at yourself.” — Ethel Barrymore

67. “A woman has got to love a bad man once or twice in her life, to be thankful for a good one.” — Marjorie Kinnan

69. “Avoiding danger is no safer in the long run than outright exposure. The fearful are caught as often as the bold.” — Helen Keller

71. “She made broken look beautiful and strong look invincible. She walked with the universe on her shoulders and made it look like a pair of wings.” – Ariana

72. “Do you really want to look back on your life and see how wonderful it could have been had you not been afraid to live in?” — Caroline Myss

74. “The most common way people give up their power is by thinking they don’t have any.” — Alice Walker

75. “ Just don’t give up trying to do what you really want to do. Where there is love and inspiration, I don’t think you can go wrong.” — Ella Fitzgerald

76. “ A feminist is a person who believes in the power of women just as much as they believe in the power of anyone else. It’s equality, it’s fairness, and I think it’s a great thing to be a part of. ” – Zendaya

77. “ The best protection any woman can have is courage. ”— Elizabeth Cady Stanton

78. “ Never doubt that a small group of thoughtful committed citizens can change the world. Indeed, it is the only thing that ever has ”– Margaret Mead

81. “One of the most courageous decisions you’ll ever make is to finally let go of what is hurting your heart and soul.” – Brigitte Nicole

84. “ As long as you keep a person down, some part of has to be down there to hold him down, so it means you cannot soar as you otherwise might.” — Marian Anderson

85. “ I think self—awareness is probably the most important thing towards being a champion.” — Billie Jean King

86. “One of the most courageous things you can do is identify yourself, know who you are, what you believe in and where you want to go.” — Sheila Murray Bethel

87. “Woman must not accept; she must challenge. She must not be awed by that which has been built up around her; she must reverence that woman in her which struggles for expression.” — Margaret Sanger

89. “You are more powerful than you know; you are beautiful just as you are.” — Melissa Etheridge

90. “A strong woman understands that the gifts such as logic, decisiveness, and strength are just as feminine as intuition and emotional connection. She values and uses all of her gifts.” — Nancy Rathburn

93. “Optimism is the faith that leads to achievement.” — Helen Keller

94. “I was smart enough to go through any door that opened.” — Joan Rivers

95. “Knowing what must be done does away with fear.” — Rosa Parks

96. “Power’s not given to you. You have to take it.” — Beyoncé Knowles-Carter

98. “Beware of monotony; it’s the mother of all the deadly sins.” — Edith Wharton

100.“You can never leave footprints that last if you are always walking on tiptoe.” — Leymah Gbowee

101. “If you think taking care of yourself is selfish, change your mind. If you don’t, you’re simply ducking your responsibilities.” — Ann Richards

102.“No matter how difficult and painful it may be, nothing sounds as good to the soul as the truth.” — Martha Beck

103.“One of the secrets to staying young is to always do things you don’t know how to do, to keep learning.” — Ruth Reichl

105.“I firmly believe you never should spend your time being the former anything.” — Condoleezza Rice

106.“A good compromise is one where everybody makes a contribution.” — Angevvvvla Merkel

108.“If your home environment good and peaceful and easy, your life is better and easier.” — Lori Greiner

109.“When we speak we are afraid our words will not be heard or welcomed. But when we are silent, we are still afraid. So it is better to speak.” — Audre Lorde

110. “Women will only have true equality when men share with them the responsibility of bringing up the next generation.” — Ruth Bader Ginsburg

113.“A surplus of effort could overcome a deficit of confidence.” — Sonia Sotomayor

115.“You can’t please everyone, and you can’t make everyone like you.” — Katie Couric

116.“Hold your head and your standards high even as people or circumstances try to pull you down.” — Tory Johnson

119.“Everyone shines, given the right lighting.” — Susan Cain

120. “Think like a queen .A queen is afraid to fail. Failure is another steppingstone to greatness” – Oprah Winfrey