There are times when you have to stay quite at work place and avoid the drama and confrontations, but there are also sometimes when you require to raise your voice. Those times could be regarding speaking good of the company, taking a stand against any discrimination, asking for your own rights and at many more situations you will have to speak up at the work.

So, here is a list of times and situations when you need to voice your rights and how does talking work for you: 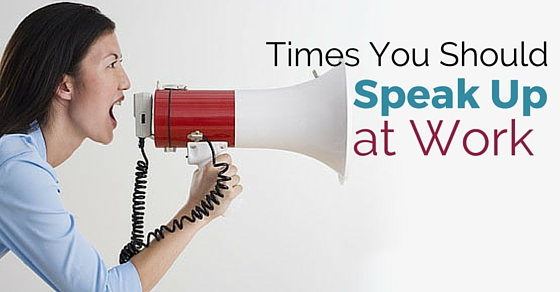 How to Speak up at Work for yourself?

1. The times when you need your rights:

You may come across the fact that you are avoided of your basic rights, so that time, you will have an utter need to speak and ask for it on your own. No one will come across and take a risk of speaking of something that is meant to be yours.

For Example, if the salary is being revised every year and you are then left out among other employees of the company, then it’s your turn to speak up at the workplace.

2. The times when you are being harassed:

Many people get harassed in the workplace, but not all are able to speak up their grievances and voice their concerns. You do not have to be among those who stay mum, but you have to speak up loud whenever you feel being harassed either physically, emotionally or sexually.

For raising your voice against the harassment, you can either talk as the person with the HR team or can directly talk to the boss or the supervisor of the company. This is something serious about which everyone needs to raise the concern.

3. When you are the eyewitness for harassment:

It’s not just about speaking for yourself only, but you should speak up for others too if they are going through the similar situation. If you are the eyewitness then also make sure you speak up the matter so as to stop such practices for further to take place.

It is not just a nice thing, but also your duty to help out those who maybe are afraid to take stern action against such evil practices.

4. During the long haul and brainstorming meetings:

The meetings regarding the finances, the advertising, the employee training, parties, discussion of rules and policies for the company, you need to say instead of staying quiet. This is not just for the mere participation but also for giving an indication of the meeting getting extremely lengthy and never ending.

Not just this, but also for contributing the great ideas, views and different ideologies you need to speak. Speaking at first will also make sure that you are capable of breaking the ice when it comes to communicating among the group of people. It’s a great way to boost your confidence also.

5. When you need urgent leave:

During the emergencies too, you need to speak to the boss or any of the low higher authorities. The holidays are to be announced long before only as it is difficult to get a holiday on very short notice, so demand a holiday, days or even months before to make it sure you get it first.

You know, first come, first serve! Many of the employees shy away in asking for leave, especially the newcomers. So, even if you are a newcomer, just speak up your heart out to the higher authority.

6. When you fail to understand any work or project:

You are given lot many assignments and projects to accomplish, its obvious to get confused and even you may fail to understand the work at one time.

So at that time speak up and do not shy of asking over and over again. If you don’t ask, you may fail to complete the task successfully. It is also one of the saying “it is better to be a fool for one minute by asking again than being a stupid for whole life by not asking”.

Ask again how the work is to be done, when it is to be submitted and so on. After all, clarifications are important and is also different from asking the same thing over and over again.

When you do not feel well, then also ask for a half day leave because health is above all other things, even the work. Health should be your first priority as only good health will permit you to do good work.

You may have a back pain, headache or any other problem, just visit the cabin of the boss and discuss the problem. These things are not said through email or any other written form of communication. You need to go verbal on such matters.

So, go and speak to the one you think it is right, he or she can either be a boss, supervisor or even any of your close colleague.

8. When you are seeing something illegal:

There are many laws and policies according to which the companies work and act upon but if you see anyone violating the rules and doing something illegal, which is against the interest of the company, you need to speak for itself.

This is not only for others, but also when you break the law, speak that also. It will showcase your honesty and faithfulness towards the trusty maintenance and will also bring forward the illegal means which are adopted by others, as a means of short cut to work.

9. When you think there is something fishy:

Something fishy can be in terms of any plotting being done or something going wrong in the manufacturing, promotional or any other department. If you find something going off the track, it is advisable to share the views with someone as the things going wrong will one day go worst, and also you never know when you get caught in the trap despite being innocent.

So, if you want to stop such wrong practices and to keep yourself out of such bad practices, then just speak, do not keep quite thinking it is not your concern. Once you are working in a company, every bit happening in it is all your concern. So, be aware and take it to higher authorities.

10. When you are not being given any credit:

You are working damn hard on the projects, but are not receiving any benefits or credits, speak it out then. The work you do, whether good, or bad, the credit is yours. The criticism for not so good task and credits, appraisals for good work also belongs to you. Do not let anyone other catch the credits.

In all types of organization, there are leeches, you know those people who are always on the forefront to take the credit of new ideas, praises, although they belong to you. They get the promotions, accolades, an increase in benefits, increase in sales etc and you are left with the same amount of bitterness, despite doing double hard work.

How you speak up, also matters though. You cannot complaint, but voice your rights. So, for this approach, talk to your supervisor in person.

11. When rumors are spoiling your image:

It takes years to make a good image, but few milliseconds to spoil it. The informal chats, chit chats often turn into rumors. These happen in kitchens, bathrooms, conferences and everywhere, but the matter of concern is that the little harmless chats turn into toxic rumors very soon, you need to speak up.

Either stop the chat immediately when it starts or talk to your supervisor so that the issues can be addressed as soon as possible.

When a group of people works under a roof, there are chances of evil practices to take place. It can be anything, even theft. Your money or any piece of expensive jewellery can get lost or stolen.

Immediately when the things get stolen, go and express your loss to the manager or any of the higher authorities so that the problems are addressed as soon as possible.

Such things need to be resolved at the earliest or if these will grow and only create havoc in your life. So, to stop the havoc from being created in your life, just speak out for the right thing.

13. To prove yourself right:

Whenever wrong allegations are spoiling your good build up image, you need to prove yourself right. For that nothing else but verbal face to face conversation will do wonders. What you can solve by talking interpersonally, can’t be done intrapersonally.

So, get up, take your stand to prove your point, to demonstrate that you are just and fair.

So, you need to speak up whenever you feel the need to be as on your behalf no one else will ever speak for you. It’s you who can take a stand for yourself, it’s you, who can prove yourself right, by bringing yourself out from the shackles of evildoers in the society you live in.