It is noticed that sometimes people lie to get up the ladder of success. You may have observed that your friends or co-workers would have been lying about their careers, their experience, employment, dates of their projects, achievements at work, college degrees even to allow them to attain the position they want or what they have aimed for.

But have you wondered why does it happen? Those who lack self-confidence and those feel they are overlooked choose to lie. Moreover, they do not want to be neglected out due to lack of the required skills. 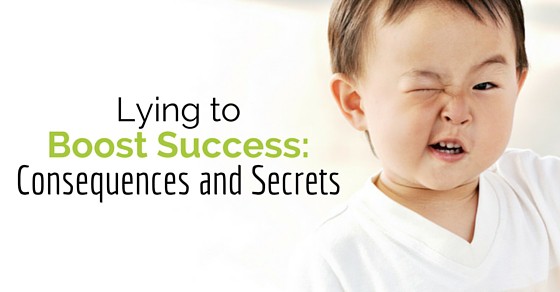 Making oneself show that they have the skill which they do not possess is often perceived as deception. Though intentions could be for good purpose, the person does so as to avoid tolerating the consequences of admitting that they do not have the skills required for the work. For this they go to extent of asking others to do the work for them and pose it in front of their boss.

They hide their inability and are afraid to face them. Besides many job are being executed by giving false information and hiding data to complete the task and earn profit. This is one form of lying to higher officials. But it is sure to have consequences on their image in the organisation and in the society at large. What could they be?

An individual or company providing false information would tarnish their image. In case individual gives false data or says that he has completed the work to a client who is in another part of the globe, then it is considered as a lie.

Employers would eventually come to know that the information provided was fraudulent but the embarrassment of having your employer know that you have lied is a damage that is irreparable. If the industry is small, the messages gets transmitted quickly. Otherwise also as it is a digital world it spreads faster. A lie could tarnish your image that you might not expect and has long term effect.

If a person tends to lie during their work at company and the message gets around quickly, not only will your image get damaged but also make you to be targeted as unbelievable personality. No one would take your words seriously and often you would be side-lined. It would lower your self-confidence and demotivate you.

As said earlier, a person lying would further create more damages that you would not be taken for consideration. There tends to be a feeling that such a person cannot be relied on for proper undertaking. In case that your boss wants to hand over an important project, you would not be in their wish list. All levels of management wouldn’t consider you to be part of their team as well.

The extent of fraudulent information and the way the information was evident could cause one to lose their job. Most of the small lies does not cause one to get fired or terminated. In case the information gets into the way of legality or has to do with law abiding issues then it is sure to be taken seriously. The individual has to face termination.

Having provided information with false data and concealing information about the person, who is providing service, can force the officials to withdraw their license to operate. There are many instances or news that people who are providing service as professionals such as doctors or engineers by concealing their identity had their licensed cancelled and to extent taken into custody.

These can be caused when the company deals with outside customers. For Example if the architect lies about his credentials could be liable for civil fraud or if ceiling collapses due to miscalculation, the company has to bear the additional costs. Another example is when contractor has built without using building codes and later on the client would have employed another contractor to complete with additional cost.

Everyone has one time or other lied at one point of time or other during their lifetime. To manipulate the expectations of the others, humans has this key survival trait. But there are people who are effective in portraying their ideas or points in such a manner that no one would seem it to be fake. So how do they do it and what makes them to be perfect in it?

It is often said that “Practice makes man perfect”. They do a little homework before they want to tell a lie. Also they don’t wait to tell at the nick of the moment as it will only show it is a lie. They work out the details precisely so that no stone is left unturned. Its done with that perfection that no one would raise a doubt.

It is often seen that truth in some matters could lead to create false impression. So matters that are dealt with telling lies aren’t actually the lies. Some are expert in deceiving as they could avoid follow-up questions. There is half-truth and half lies.

Once the person knows the target they have the tactic for getting inside the head of their listener. Knowing what they intend to hear, the narrator will be able to avoid any suspicions.

An effective liar is aware of the listener’s interests and activities to take cover in. They know their target very well inside out. They are able to carry their story easily without stepping on the trip wires.

No lie is told without a reliable reason or benefit attached to it. Effective liars save their ammunition unless they need to fire. People who tend to lie often get trapped. But experts don’t lie unless need to and they make it such a way that no one notices it.

Successful lying comes out with lot of hard work wherein all the details are pinned down. It might even require one to take notes. But when talking to anyone they see to it that they maintain the same information and the same details. Maintaining consistently with everyone is their main idea that brings their information seem true.

You would have noticed that people who speak lie find it difficult to hide their emotions. They usually fidget, eyes look down, stutter, touch their noses often, exchange gestures, etc.
But experts in lying are good at controlling their body signals to the outer world and they maintain that.

Many a times you would have seen politicians reacting very rashly accusing when encountered with allegation. They talk their way out by accusing and drive away the topic. The fact is just like its uncomfortable telling lies, so is accusing others.

The expert is able to detect suspicion in listener allowing him /her to make any changes to their content they are talking. They lead the listener from his body language and able to remove the suspicion strategically so that the fabricated story ends well and perfectly.

Good liars are quite convincing and know how to prove that point well. They are natural performers and can make changes to the story with ease and spontaneity. Having the ability to convince is one of the important attributes.

How Lying can Boost your Success:

Working environments are filled with lies, time to time which is said to be necessary for getting ahead. It could range from your interaction with boss to your co-worker, lies are being told for some reason or the other. Wondering what could be the reasons for lying and how is it going to help you be successful in your job?

A remark from your boss may seem disgusting or out of line with your principle. Or the boss may be requesting to get your opinion on his apparel or outfit. Though you may not agree to the terms or see that the apparel does not suit him, you need to tell a lie so as not to hurt. This way you save your job and stay in good terms with him/her.

You may have clients who might have some products or system or business that is not making much progress and they want to give away or close it. Instead of sharing the same idea with them, telling a small lie at that moment could save. You could elaborate on the details to fill the missing gaps and it could help to boost the morale. The situation could improve.

You would be exposed to different categories of people at your workplace. Some of them maybe of your liking while some may not. For the latter category, you would need to take care while communicating with them. With such people you would have to speak lies to build good relations which is the main essence of survival at workplace.

You would have forgotten to perform a task that boss had added. While being reminded about it, you would not have time to do it as you are already swamped with work. You would answer him/her with a note of lie that ‘you are working on it’. This would allow more time to prioritize on it and manage the tasks on schedule.

You might have seen some co-worker or friend who seems to be upbeat even when things are really bad. By saying that it is bad does not improve the situation. By telling lies to your co-workers time to time when things are bad only boosts morale and brings in hope and confidence. It shows that you know how to deal with things.