A hierarchical organization is one which is similar to a pyramid where every employee is a subordinate to the other, except the CEO. Hierarchies are considered as a logical way by which business is structured.

Professor of University of Queensland business school mentions that a flatter as well as a democratic work structure is one which performs better. Innovation is brought to light when an organization offers freedom to all its employees in decision making process.

To overcome all the invisible hindrances that are prominent due to hierarchies, the following mentioned are tips to eliminate company hierarchy are followed here. 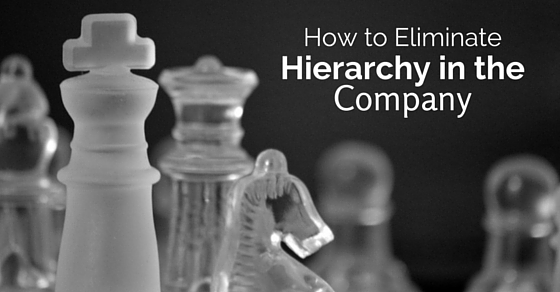 Tips to Combat Hierarchy in a Company:

If your company needs quick interactions, independence and teamwork all the time, then hierarchy must be eliminated and the company should adopt  flat business structure. Hierarchy has many disadvantages in the organization when need to be followed.

Companies which follow a flat structure are said to be more innovative than ones that follow a hierarchical structure. Innovation is thus important for an organization and hence running flat instead of hierarchy of organization is important.

In a flat organizational structure, employees are encouraged and they work towards a common goal. There is no need for higher officials to control the behavior of the employees.

Professor Kastelle mentions that if right people are recruited then they are enthusiastic in their work and fulfill the commitment without hassles. Hence a Hierarchical structure is not considered to be appropriate for an organization.

For quick decision making, direction and faster production employees must be trusted and allow then to carry on with their work so that they are successful. In a hierarchical structure there are logjams of people where employees need to wait for decisions from higher officials.

Professor Kastelle hence mentions that firms that are small and possess autonomous teams are quicker than ones that have large hierarchies. By this way changes are made and adapted in a quick manner.

Hierarchy is inevitable in business and is not a bad thing to be considered. The main disadvantage of a hierarchical structure is the slow work environment that is imprinted in everyone’s mind. There is lack of innovation and trust as the management does not try to respect the employees, in the same manner the employees also do not respect ones around them.

It is the duty of the employee to develop new ideas together rather than just signing off the each idea accompanied with instruction blindly. This is considered dysfunctional and creates a problem to the structure. Flat structure can hence be appropriate for organizations rather than a hierarchical structure which creates issues as mentioned above.

5. To involve everyone hierarchical structure must be eliminated:

The optimal and flat structure business should pop up in your mind when you think of making any structural changes in your organization. In order to reap the best outcome appropriate for everyone, involving the team in decision making is important. At times of designing a structure, the team must be engaged in conversation and their inputs about where they stand, what they need to achieve and how as a team can they achieve are discussed.

This collaborative approach must be followed every day in project planning and discussion from the initial start so that all the team members participate in the project. By this way issues are solved and they work together where they bring about a solution together.

When a hierarchical structure is considered, the boss is the only great person who decides whether to keep an idea or let it go. In the same manner, the boss is the only person who is the main source who knows all the information and other aspects in an organization. This is not the case in a flatter structure. To achieve the same in a hierarchical organization the right rules and procedures must be put forward so that the workflows without interventions.

7. Putting forth the right rules and decision making:

In order to remove the management layers and out the right rules in place is never an easy process. You may have had a varied design in the initial stage but as changes occur the procedure can be amended to accommodate change.

By this way, teams can be made to work in an interconnected manner rather than in parallel. By this method contribution and innovation is achieved rather than teams fuelling their ideas to the top management.

8. To be more self-directed:

In a hierarchical structure, the manager is the one who plans and joins the dots for a team to coordinate and work on projects. But when a flatter team is taken into consideration they are more self-directed and focused. It is important to develop a functional team which faces few difficulties in developing cultures. The process in any organization is accelerated when teams are allowed to work in different organizations and they educate them with new skills.

Pairing and learning from each other is another aspect that can be helping them learning new techniques and applications. Mentoring and reverse mentoring where juniors teach seniors can be practiced for effective success in the organization. Hence hierarchical structure is not considered the best to be followed in an organization.

9. By pushing power down:

Distribution of power is the main flavor of company hierarchy. If power is defined as an aspect that makes changes then, power must be allotted to each role to a certain level. It is also hard-hitting if everyone has equal power as it may cause chaos in decision making situations.

In few good hierarchies even though power is pushed out, the decision are taken by the higher official or the CEO. It would be better advised that the CEO collaboratively takes decisions with other teams. In that manner hierarchy culture can be avoided and flatter structure can be considered.

10. Roles that are sensible:

Roles are something that makes the network of a hierarchy; roles are ones that are defined regarding the status and not in terms of work or output. The latest news was the removal of hierarchy in an organization called Zappos. Zappos followed an approach called holacracy which means there are no titles and no roles in the organization.

The latest hot news about Zappos is that they eliminated hierarchy and replaced it with holacracy. They do not follow a top down organizational hierarchy but possess a flat holarchy. The power amongst the employees is distributed equally.

There are nearly 400 varied circles in Zappos and when the rollouts for the employees are complete by December 2014, they have the freedom to take up any role within the circle. And hence they do not hide any titles and also radical transparency is the main goal.

The main intention for organizations to adopt flatter structure is that they are able to employ innovation. Automattic, GitHub who are firms behind WordPress and W.L.Gore are ones who elect their CEO democratically. The tips mentioned above are ones which shows ways to eliminate company hierarchy.

There are few organization which have a fairly goo hierarchical structure. They offer their employees with more freedom and involve in decision making. But there are few strict organizations that possess a bad hierarchy and hence push the employees to trouble.

This way they have hindered innovation and generation of ideas amongst employees. It is thus clear that hierarchical structure should be eliminated as they possess a number of drawbacks and hence make the company less productive and less profitable.