When it comes to classifying something in the name of their appearance, populations or educational history, there are a number of factors that need to be considered while making the final cut into it. And in this case when it needs to list the Most Educated Countries in the world, only one factor needs to be considered and that would be education, the best education. 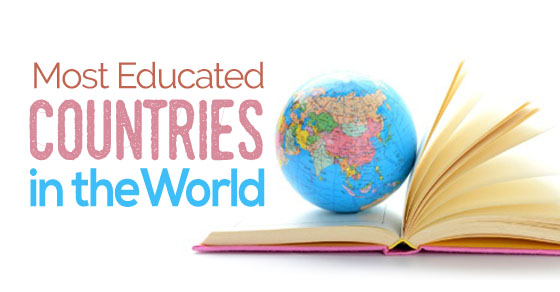 21 Most Educated Countries in the World:

Education is like a boon to everybody and one should understand the importance of education. In this list of countries by education level, each and every country is quantifiable, not by their population, but by their educational background and best education system.

As per their geographical difference makes sense, the Japanese have a better education level by country than the united states of America. On an average 34% to 47% of Japanese adults managed to finish their tertiary education.

It is one of the countries where university-level education has started to spread their wings accordingly. And in terms of literacy level, the Japanese survives by a very thin line as most of the Japanese can read and write subjects like maths, science and many more.

According to the OECD’s most educated counties list, Isreal made an effort of staying the fourth place as most of the people residing in Isreal have managed to finish their territory education and in other words on an average 47% of the Israelians has maintained an educational degree for their survival.

On average, only 43% of Americans have maintained their tertiary education. And on the list of OECD’s most educated countries list, it kept itself in the fifth position which is quite good.

As far as the recent research the United States has decreased to their level of educational factors. But similarly, on an average 89% of the age between 25 to 64 Americans has managed to complete their secondary education.

It is one of the strongest skilled people’s country where almost more than half of the Korean adults have overtaken the secondary education obtained students in terms of their tertiary education.

On an average 66% of Korean adults have managed to complete tertiary education with the age limit between 25 to 64.

Most probably the top education system in Australia holds a very lengthy process and that’s why most of Australians could not afford to finish their secondary education as well as tertiary education.

The United Kingdom holds 41% of the population of tertiary education. According to the OECD’s research, this is the country where women students aged between 25 to 34 have maintained an educational record in the world.

And similarly, the students in the United Kingdom managed to pursue tertiary education than secondary education.

When it comes to an average percentage of the population, New Zealand holds 41% of tertiary education. According to the OECD’s research, almost 91% of 3 to 4-year-old kids were enrolled in early childhood education. And even in literacy level the people or adults or children of New Zealand have maintained a common reading and writing abilities which is a good start for the country.

Ireland holds 39.7% of tertiary education in terms of their educational population. Almost 100% of minors with an age limit of 5 to 14 years old have enrolled themselves in early childhood education. And similarly, 93% of Ireland students have maintained an upper secondary diploma than secondary education.

As far as literacy level is concerned the people of Ireland know the basic reading and writing elements of education.

Most of the countries listed in the discussions are measured in terms of their population education level. But Germany is one of the country where free public education programs have taken place.

Most of the countries are counted and classified on the rate of their education in secondary and tertiary but Germany holds an average common literacy level in the world.

These countries try to draw the attention of the parents by providing educational programs that include all the detailed information about the benefits of education for everyone.

If you speak about education in Asia, the first one to come into our minds is the Philippines. Now this country is full of talent . From having the most talented people to producing the best mangoes, bananas, and pineapples, the Philippines is a beautiful country full of wonderful beaches, islands, and food.

Not only that, this place has had some of the most successful people in the world. From Enrique Iglesias to Bruno Mars and Vanessa Hudgens, all these guys are half Filipino and are doing quite good for themselves.

People from all over the world come to enjoy themselves when it comes to vacations. It is also a great place to study about history. Most people in the Philippines speak English which clearly speaks a lot about their educational background.

Speaking of the best and well top educated countries in the Asian continent, it would be a huge mistake to miss out on the one and only India. Known for its history, tradition, and technology, India is not only a wonderful place to live in but also a great country to educate yourself. You will find everything you want in India.

From beautiful beaches to the mountains and valleys, this place is one destination that has everything. Speaking of education, India has some of the best schools, colleges and universities you will ever see. They have ranked all over the world and have thousands of international students visiting for educational courses. So India is definitely a great place to study and learn!

Taiwan is a beautiful country! It is one of those four Asian tigers that have a very successful and powerful economy. Also, they have a very strong dedication towards human rights and have a very good system of education. Apart from having friendly people, good food and amazing beaches, Taiwan has great places to visit.

Speaking of their school and education system, Taiwan also has over a hundred institutions where students study engineering, learn about accounts, arts and a lot more. Vocational training for three years is also quite popular here. Children here study relevant skills such as computer science, liberal arts, and science. Plenty of schools have also been spread throughout the country for primary, middle and high school education.

Believe it or not, Ireland is one of the most successful and well-educated countries of the world, With its capital in Dublin, they have three levels of basic education although in the past few years the level of further education has grown a lot.

The education in Ireland is free at all levels which is why so many people are educated. They also have four to five types of schools where children can enroll themselves and complete their education within time. Also, the kids are given holidays for recreation and vacations.

The education system in France is also quite good. They have more than a hundred institutions with more than three basic levels of education. Also, enrollment in schools and colleges is over 15 million. Plus more than 90% of the French population has got a diploma. Only 20% have gone for post-diploma education.

France also has a great system of international education. They have several foreign universities such as Baruch College, Parsons Paris School Of Art, University of London Institute In Paris etc

Poland is one of the most well-educated countries you will ever get to see in entire Europe. According to the recent OECD ranking, Poland was placed fifth in the whole of Europe and 11th in the entire world. Polish schools were also given high grades. This country is also head of the United States and Britain as far as we have learned.

Not only that, Poland is way ahead of countries such as the Netherlands, Switzerland, South Korea, Japan, and Taiwan. It has brilliant schools for maths and science too. Experts have also pointed out that Polish pupils usually tend to do much better in tests than in regular room activities.

Another country that excels in education is none other than Switzerland. It has one of the best education system in the world. Back in 2009, this country had employed a minimum of 195,000 people which is more than half of the workforce. Not only that Switzerland is also a renowned world leader.

Whether it is wealth management or private banking, they always know the best. Given the banking organizations, the UBS and Credit Suisse are both big forces within the financial market which is responsible for the creation of jobs around the world. They also have excellent Ph.D. programs for students who have to study banking and wealth management.

Schooling in Span is always funded by states and is compulsory for those between the ages of 6 to 16 given that there are no courses repeated. Though there are some non-university education in a few schools, most of them are state-funded although parents have to pay for books, uniforms, and materials. School hours usually go to 9 to 5 with a two-hour lunch break in the middle.

Back in 2003, it was found out that more than 97% of the population is well educated. It was also said that the literacy level in Spain is very high. With time it has also gone much higher. People above the age of 15 are able to write, read and speak languages fluently. That says a lot about its recent developments.

It is the country which spends a major share of its total wealth on the education sector, the expenditure on educational institutions of 7.9% of its GDP. Education is one of the primary priority in the country.

Denmark was among one of the few countries where the expenditure on education grew up actually during the period of financial crash or recession of 2008—2010.

Here is a list of few other topmost educated countries with the best education systems in the world.

However, the bottom line is that all these listed countries make one thing clear that in this world other than these countries there are a different number of countries which needs the provision of education for their better livelihood.

Therefore, this data provides important information to all the countries which come within the radar of education in the world. With that, we would like to bring the post to a close. If you have liked reading the article and have benefitted from it, do let us know in the comment box below. We are waiting to hear from you. On that note, good luck!