Technology has changed so many things for us that we can’t even imagine our life without some sort of help from the techno world, but have you ever thought that other than simplifying our life, technology also works to replace us.

In the next 20 years, there are going to be jobs which will look like the foreigner topic because technology will replace them. In this article, we are going to discuss jobs that won’t exist in 20 years simply because we will have no need for them. There can be other reasons for these disappearing jobs, but advance technology is going to be the top most reason. 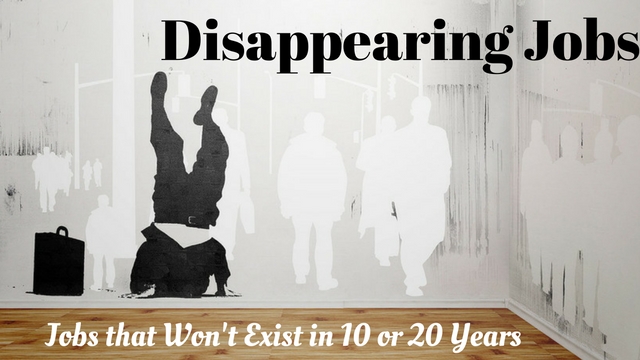 Artificial intelligence has changed our life and now it’s going to simplify our life further but on what cost? There are jobs that are going to lose in the sea of automation and never going to come back.

Disappearing Jobs Due to Advancements in Technology:

We all have so many fond memories of libraries, but now libraries are only part of a school or colleges, and soon enough they are going to be diminished in thin air because now who needs a manual room full of books when there is a digital library at your fingertip, even Google books, and others are legal now. With library system vanishing, the job of librarians are going to be nonexistent in coming years.

Inspite of the fact that the librarian job is difficult, we wonder what they are going to do when there is no library to maintain and arrange books in an order, to the point that even a blind person can find the books easily now with the help of smartphones, apps and e-books that are making the job easy for anyone.

It may look sad or depressing to you, but library jobs are going to be one of those jobs that won’t exist in 20 years and we cannot do anything in this world of automation and outsourcing.

Well, if you are surprised by seeing tech savvy jobs on our list then don’t be. You are just wasting your energy on the surprise because when it comes to technology, it gets old even before we get our hand over it. So if the social media experts going to be nonexistent, then there is no surprise in there.

Automation and technology bring lots of change and robots are more capable of doing such task with great accuracy compared to human. So don’t be surprised if you soon see cashier less counter and you pay directly to the machine during checkout.

Yes, your most loved newspaper distributors job is not going to exist in the coming years because as the new generation taking over and technologies, as well as the internet, are more accessible than ever, the need for a newspaper decreases.

No new invention causes the extinction of the newspaper distributor, but the lack of time and interest in print media, people use online news reading more often, even some elderly people are accepting the concept of e-paper. Newspaper distributor’s job is going to be nonexistent due to the bad condition of print media and the heavy decline in people’s need and acceptance of the internet.

This is the job which already stood at the edge and hardly need any push to end its total existence. The job of the typist and word processors are on the blink where we hardly see them and here we are talking about manual word processors and typists who use a typewriter to write notes, letters, and documents not some fancy window application.

Only government officials are the place where you can see one or two typist and word processors nowadays and even they have modern day applications for the task. This job is already on a downward path and going to be nonexistent soon with cutting-edge technologies and you will hardly see any typist or word processors in coming 20 years.

Do you remember the last time you post a letter or something to your loved one or used postal services in last five years? Your answer is no and that’s been the reason for the extinction of postal service, yes technology being the main reason because we choose email and social media, phone calls, SMS as the source to be in touch with our loved one over the traditional postal services.

The heavy decrement in the use of postal services in last 10 years and constant going to downhill demand, cause the extinction of postal service in coming 20 years. The thousands of jobs of postal service won’t exist in 20 years because no one will hardly need traditional postal service to send something to their loved ones and technology will replace it completely by its time saving and fast services.

In this current state of technology where everything is over your finger tip, do you really need a travel agent? Hardly, people trust travel agents nowadays where they can easily find the cheapest of everything and past records with a snap of their fingers and all the bookings and confirmation completed online.

Who will need travel agents in coming decades or two when we hardly use them now? No one and their career going to be nonexistent in coming years because once again technology and the internet taking the place of human and proving a reliable source compared to human services so why to waste time over human services.

Well, this is the job most of us hate and want with all our heart that this career just goes to end because of the irritating promotional calls and messages we got on a regular basis, but when it comes to career then this is a hard news for all those who are in telemarketing and getting good earning out of it.

Their career is going to be non-existing in the coming decade or two so we won’t get rid of unwanted calls and messages because automation will replace it with robot service. This is another job that won’t exist in 20 years because advanced technology will replace humans.

This is seriously bad news for those who are in this line of work and earning good amount and social status out of it, but this is one of the jobs that won’t exist in 20 years because technology will replace human once again to provide better service.

The whole newspaper and print industry are in the big struggle because of rapidly decrement in demands of print media. It’s become hard for the print industry to earn any profit because of high use of internet and innovations like smartphones, tablets which work as a great replacement and provide information on a click of a figure; people don’t have to wait for the newspaper till next day.

Well, there was time when secretaries was one of the most important people in the office due to their direct involvement with the bosses and people tend to respect them a lot, but now, tables has turn and bosses do manage their work on their own because of the technology which never ceases to forget or misplace anything.

The jobs of secretaries are decreasing year by year and the estimation is that in next 10 years, there will be a huge decrement in secretary jobs based on last decade results and they won’t exist in 20 years.

Bosses in current time can manage their own calendar, book their appointments and look after their schedule with the help of latest technologies. They didn’t feel any problem in making their own coffee and booking their flights so why they need a secretary.

This is the job for those who are bound by language, education, and are in high-need of earning because you do not need educational qualification, great communication skills to load, retrieve and stock in warehouses from the trucks and goods carrier. This job doesn’t offer very high wages, but provide enough for those who have nothing else.

Recently there was news of the successful launch of a human-less taxi which can drive you around without human drivers for the low price. New technologies are bound to replace taxi, lorry drivers in a decade or two because of their reliability, high performance, and low maintenance.

They are one of the hardest working employees among all industries, but their jobs are in one of those jobs that won’t exist in 20 years because automation of jobs provides more reliable options and better quality of work.

Assembly line workers are those who work with great concentration and determination to create an object. Robots are a better option than human; technology seems more reliable and less mistakable so why will they choose a human? No, and that’s the reason this industry won’t see any more happy years in 20 years.

Machines are bound to replace humans and there are more and more job options that won’t exist in a few decades as the machine will take over. We hope there will be other options to provide a means of living for all.