The inter-connectivity of the world has become lot better each day, it has made the world smaller and smaller. One can connect to anyone across the globe without much trouble, they can even do business at various levels from business partners, suppliers, traders and many others.

Even businesses of import and export have become more popular as one can share the goods of various countries for the consumer. The much larger organizations now prefer people who can speak few more languages other than their own native language. 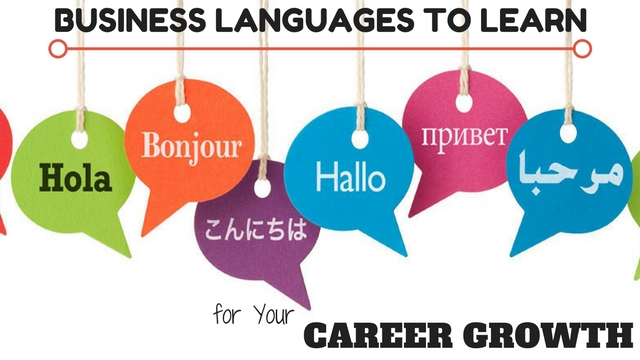 Be it a seasoned CEO or a young graduate, employers are seeking enthusiastic employees who can grow the business better than ever. Hence, employees who are fluent in international languages are becoming an asset to the company.

Before choosing to learn a new language it is important to understand the industry you are working in, the business settings of that specific industry, countries which are core for your customers or suppliers for your business and how it will benefit your employer.

One can understand the popularity of the English language from the fact that majority of the machines designed and coded are done in English. Also, it is a language which has the highest number of speakers across the world, even if you are travelling for a vacation or doing business, you can survive with English anywhere in the world. Being the most commonly spoken language in the world the opportunities this language offers is immense and it cannot be counted.

China is one of the largest and highly populated country in the world. One can easily find Chinese in various countries who are doing successful businesses, Chinese are known to be good business partners and China has lot of manufacturing units, where people from other nations collaborate to fulfil the business needs. There are more than 900 million people who speak Chinese, as their native language or second language.

It is a common language in China, Taiwan, Hong Kong, Philippines, Malaysia, Thailand, Mongolia. These are the countries known for businesses in various sectors, in fact, China is known to be a country who delves in various business opportunities in different sectors across the world.

Hence, learning Chinese comes as an advantage for the employers. Though it is a complicated language to learn and many find it difficult to understand during the initial phase, but once understood it provides an edge in your industry.

Russian is known as a complicated language to learn but once someone learns it can achieve easy access to success. There are many benefits and reasons to learn Russian, it is official language in 6 countries and in United Nations. It is widely spoken in eastern and central Europe, there are more than 160 million people who speak Russian in the world. It is popular language in technical and scientific text.

Russians are known as great and efficient business people and good with diplomacy skills but the concern is that they cannot speak any other language other than their own native language. Russia being a superpower in the world has a stronghold in the economic growth of the world. But if once a person learns Russian they can reap huge business benefits with them as they are prominent leaders in oil industry also.

Japan is a leader when it comes to high technology in the world. They are the innovators in sectors of electronics and robots. Japanese are known to be apt and precise nature business people. Therefore, to connect and get the benefits of advancement of technology learning Japanese becomes very handy. Japan is the second-largest economy in the world and more than 128 million people speak Japanese.

There are many Japanese businessmen who speak English but they are still not efficient with the language. After Chinese it is another complex language to learn. It is seen as an added value for those who can speak Japanese. Learning Japanese opens doors to great business partnerships in the world of technology and promise to an ensured growth for the organization.

Spanish is the most popular language in USA and Europe after their native languages. There are more than 400 million speakers of Spanish in the world. Many countries specially USA lookout for people who can speak Spanish and are fluent with it. The western hemisphere of the world has majority of the Spanish speakers.

Spanish people can be easily found in industries like media, banking and retail. It is projected that the Spanish population will increase by 50% in USA by 2050, becoming the larger part of the US population and contributing a lot to US economy.

About 20 countries recognize Spanish as an official language, hence, increasing the horizon of business opportunities in the world. Another interesting thing about Spanish is that it is easier to learn and communicate than English and more and more people are switching to learn Spanish from English.

The interesting fact about French is that before the rise of American and British empire, French was the most common language used for communication across the world but gradually it lost its superpower to English. Yet learning French is still beneficial to do business in. There are more than 330 million speakers of French across the world out of which 74 million has French as their native language.

It is commonly spoken in various regions of Europe, Mediterranean and Africa, roughly calculating it is a language in use in about 40 countries across the globe. Therefore, learning French will give you bigger business opportunities in various sectors too for example, luxury, fashion, it is also considered as the language of art and architecture due to its rich cultural heritage. It is also an official language in UN, NATO, EU, international courts and many other places.

German is the widely spoken language in Europe and Germany has the strongest economy in Europe and is fourth in the world, more than 130 million people speak German. Germany has the GDP growth of about 2.4 trillion Euro, even in the times when Europe is undergoing economic downturn. It is one of the largest exporter in the world, Germans are known as the best engineers in the world especially when it comes to machines and cars.

It becomes important in other sectors in chemistry, pharmacy, biology finance. German business partners are well known for their professionalism, discipline along with their work. German language is easy to learn since they have many words which are quite similar to English. Learning German is beneficial if you are collaborating for business partnerships in European region because it is commonly used there.

Arabic language is widely used in Middle East region. It has more than 220 million speakers across the world and fifth language widely spoken. It is prominently used in about 27 countries hence, Arabic has gained its popularity as a business language over the years. Most of the Arabs find it hard to converse in English therefore, speaking Arabic comes as an advantage while doing business with them.

Despite the various political and social turmoil in Middle Eastern region, Arab world is a prominent leader when it comes to industries like, oil, construction and real estate, but understanding Arabs and their cultural restriction makes it essential to learn Arabic because it allows the business partners to decide on the approach they need to take while negotiating the terms.

Many luxury brands are opting some Middle Eastern countries for the development of the business. As US engagement in middle east region has increased, the demand for Arabic speaking professionals has also grown.

It’s popularity has increased after 2014 World Cup hosted in Brazil and Olympics in 2016 and the success of these events have assured the world of the Brazilian work culture.

Also, Brazil and South America are the regions with steady growth in their economy. Brazil has huge natural resources, making it as an important exporter of these resources. Their technology is also attaining popularity and lot of tech businesses are coming up in Brazil, hence, increasing their value as a growing country.

India currently has the fastest growing economy in world. They have lot of people in technology, manufacturing, luxury and in many more sectors. Hindi is spoken mostly in India and in Indian sub-continent.

Majority of the educated Indians even those who are in business can speak fluent English which makes the communication with the people on the globe easier. But if on business level you intend to bring changes and find new business partners then learning Hindi will come as an added advantage.

As a known fact, in India there is no common language and every region has their own language. But since the majority population in India speaks and understand Hindi very well, it makes it easier to communicate the people in various segments.

It is not yet considered as the most important business language that one needs to learn. But in coming years Dutch will attain this status. It is spoken by more than 23 million people with the highest population speaking in Belgium and Netherlands.

The interesting fact here is that Netherlands population is only 0.32% of the world population but has a GDP growth of more than 1% in the world. They are great businessmen and are efficient partners to be with.

But the only disadvantage of learning Dutch is that it has a limited area where it is in use. If your business demands those specific markets then learning Dutch will reap higher benefits.

No one speaks computer languages nor do they communicate in it on human level. But these machine languages has become important because the world is becoming more and more digital. It is not necessary for one need to learn or be an expert in a computer language, but having a fair understanding of one programming language will be helpful.

For example, python, Java, C++ or HTML, anyone of these is enough to give you a fair understanding of the functionality of the IT world. Understanding programming languages helps when you need to connect to someone to understand the problems and bugs in the system.

Learning a new language is not an easy thing to achieve, because with every language comes a different pronunciation and meaning to a word. In fact, there are certain risks involved if the language is not learned properly because if the communication is not right instead of working as a tool of benefit it may create problems.

Therefore, it becomes essential to pay complete attention while learning a new language. Also, if you plan to learn many languages, it is not easy and requires time and dedication, so ensure you to start with the most common and important language in your industry.

As you grow ahead you can learn few more languages from the list to increase your business acumen and diplomacy tactics. Scientifically, it is proven that those who know more than one language has more developed brains, which increases their efficiency. Therefore, one should also learn them not only for business purpose but also to increase the functionality of the brain.