There are many jobs that no longer exist anymore due to development in technology and also with the change in innovation and transformation of science. On the other hand, there has been an increase in jobs that didn’t exist for the last 50 years.

The disappearances of a majority of jobs can be blamed on the rapid technological advancements that have occurred over the past few decades. 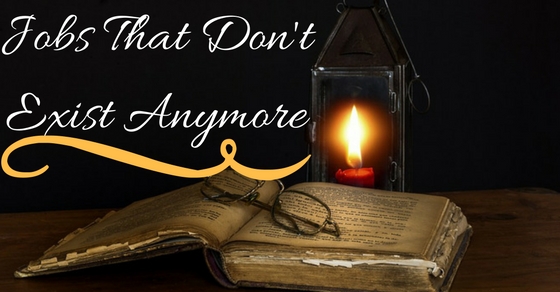 Many consider that it is a great thing that these jobs are now gone since a majority of them were dangerous, unhygienic and life-threatening.

Old Careers or Jobs That No Longer Exist Anymore:

Bowling pinsetters were young boys who were employed to stand back at the bowling stand, to arrange the pins after each game of bowling. They were originally manual pinsetters whose main job was to clear the rail, take the fallen pins away and reset the pins for the next game. They also had the job of returning the bowling ball to the player.

A majority of the pinsetters were small boys, who were stationed near the bowling alley to clean and ensure that the equipment was working properly. The name pin boy was thus originated from the word pinsetter.

Human alarm clocks or knocker –ups was a profession that was predominant in Britain and Dublin. The job was very popular at the beginning of the industrial revolution until the 1920s, when alarm clocks were expensive and rare to the common. The main job of the knocker –up was to wake up the recipient so that he could go to work on time.

The knocker-up always used a short and stout stick to knock on the client’s door or a long and light stick for knocking on windows. In return, the human alarm clock would get a few pence every week. They would not leave the door or the window until they made sure that the client had woke up. Generally, the job was done by older men and women.

As a form of pest control in Europe and neighboring countries during the era of the Black Plague, certain people called rat-catchers were employed. The title of the job is self-explanatory. The main job of the rat catcher was to catch the rats and sell them.

These rats were then kept in large tubs or rings, where the rats were eaten by dogs. This was a form of entertainment for peasants in 19th century Europe. Rat catchers caught rats using their hands and also had specially bred terriers to assist them to catch the rats.

Ice cutting was a flourishing trade in the arctic region of Canada and Alaska. It was the task of collecting and cutting ice and selling them as a commodity for cooling. The trade of ice selling was predominant before the age of mechanical cooling and air conditioning technology. The ice cutting was usually done by farmers when their fields would solidify with ice during the winter.

The ice cutters normally used hand saws or a powered saw blade by which the farmers would cut the ice into large blocks or chunks so that the ice blocks were easy for transportation. Ice cutting is still predominant in some areas, but only for some special purposes such as for snow sculpting or similar events.

A lamplighter was a person who employs to extinguish and light street lamps during the 20th century. This profession has replaced by electric lamps and street lighting. Before the introduction of electric lamps, traditional lamps used wicks, candles, oils or similar inflammable liquid.

Log drivers were men who were responsible for driving the log from the forest to the sawmill by floating the timber towards the mill, with the help of the downstream current of the river. It was the main form of transportation in North America, Canada, and Europe.

During the 19th century, many log mills were situated near small water bodies that were used to collect the grit from sawing the wood. The purpose of the log driver was to direct the logs from the forest to one part of the sawmill. The log driver directed the logs as if it was cattle. Log driving was a popular culture in the early 19th century.

Body snatchers were widely popular in 19th century America and England. They were also popular in regions of China, Canada, and Australia. Body snatchers generally worked in small groups and would always carry the necessary tools with them wherever they went.

Milkmen were popular in North America and Britain, before the onset of mechanized refrigeration and cooling. Due to the lack of cooling, fresh milk could not store at home for a long time and hence, it was the duty of the milkman to deliver fresh milk every day to the houses. Milkmen were still predominant in the 1960s.

The job of the milkman was to deliver fresh cartons or bottles of milk every day from the dairy, and sometimes it was occasional that the milkman would bring farm products such as ham, butter, eggs, chicken or even sherbets to the customers. They would travel from house to house using a low powered vehicle called a milk float.

Instead of direct dial service these days, in the 19th century, multi dial service was present. The call had to pass through the operator to get to the recipient. The switchboard operators would then connect the jacks containing the source call to the phone plug which had the recipient’s number. A majority of the switchboard operators were women and it was a booming business till the invention of automatic switches in the mid-20th century.

A lector is a common form of employment during the age of mass production, where factory workers often pool money together to hire a lector who would read publications and journals of left-wing parties or union trade workers. The first form of such employment sees in Cuba. Since education and literacy are hard to procure during the industrial revolution, literate people were paid to read transcripts and journals in public.

A food taster is a person who would test food by eating it and confirms that it is safe to eat. Food tasters were often employed by people who were important and famous or who were always under the constant threat of assassination.

The first responsibility was to confirm that the food was safe to eat and ensure that there were no poisonous substances present or any fast acting poison.

The second responsibility of the food taster was to constantly survey the kitchen and make sure that there is no scope for the introduction of poison in the food.

Lastly, if the emperor or ruler suddenly died and the food taster has the same symptoms, then it was determined that the emperor died from poisoning. The practice of food tasters is still predominant in some parts, though it is not very common.

Plague doctors were physicians or health carers, who treated patients during the time of plague in the 17th and 18th century Europe. Since they were paid by the government, they would often treat both the rich and the poor. They were often second rated doctors, who would travel from place to place treating patients.

They often helped a lot of the infected demographic. The plague doctors would always wear a stuffed costume, it had a long black overcoat that was lined with wax, large goggles and a beak shaped mouth guard that was stuffed with aromatic and sweet smelling herbs and spices. The first plague doctor was appointed in Ancient Rome during the mid-6th century.

A leech collector or a leech gatherer was a person who was responsible for collecting and selling leeches to various medical practitioners and doctors during the 19th century in Europe.

Many medical practitioners had a large demand for medical leeches, but since these leeches were hard to find, they employed people to gather leeches. The leech gatherers would often hunt for leeches in swamps and bogs, where they used old cattle leg and horse’s legs as bait.

A town crier or a bellman was a person who would travel from town to town proclaiming the various announcements and instructions from the emperor and the village heads. The town criers had various uniforms that showed their authority and power within the common. They often carried a bell or going to attract the attention of the people.

In the medieval era, the town criers were often seen as a form of communication between the ruler and the common people, since the locals did not know how to read and write. Town criers were not only common only in Europe and North America, but also in different parts of Asia, especially in India.

Phrenology is a pseudoscience that was very common in the early 19th century. It was believed that the brain consists of different spectrums, each spectrum focused on a part of character, emotion, and thoughts. Phrenology was a science that was predominant to study human behavior and characteristics by observing different parts of the skull.

With the onset of modern neuropsychology, phrenology considers a hoax rather than a science and the fad of hiring phrenologists slowly declined. Moreover, phrenology was seen as a result of mixing sexist ideologies and racist stereotypes.

Gandy dancers is a slang term used for workers who used to place rail tracks and arrange the railway line before it was done by machines. They were also considered commercial navigators, who would navigate the railway lines through mountains, hills, and valleys.

Gandy dancers would often work in groups where one group would set the tracks and the other set would fix the track onto the ground. This form of occupation was very popular in the US, especially in the regions of Mexico and the US border.

Jobs That No Longer Exist:

With the advancement of technology, many jobs that seem to be important in the past became extinct as more effective alternatives for those came into existence. Technology not only eases the process but also reduces the manual work of people making it error-free and easy.

Now let us just go down the memory lane to view some of those jobs which disappeared.

As technology developed with the change in time, many industries flourished and at the same time, many jobs became more and more obsolete.