The situation arises that a person needs to go for an interview early in the morning and the previous day; they completely forget about it and go out drinking out with their friends. So for getting in time for hangover interviews, they have so many problems physically and mentally as they get a severe headache early in the morning or having an overthrow for a long time. 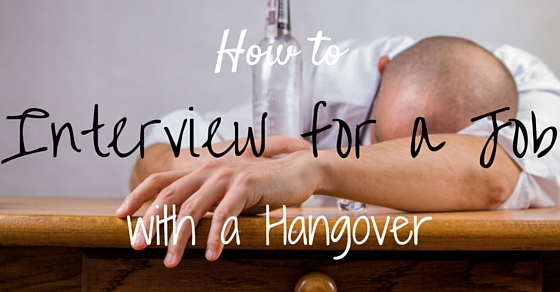 So accidentally if this kind of situation arises in anyone’s life, they need to keep the following things in mind before, during and after the interview. Let us look and them now.

Hangover Interview – How to Deal With It?

For a long time, Energy drinks containing loads of electrolytes that energize, vitalize and refresh the mind of a person known as an effective cure for a hangover.

After drinking alcohol, a person always suffers from dehydration the next morning as there is a high reduction of fluids in their body.

So it preferred that a sports drink with a high amount of glucose and sugar content recommend bringing the person back to a somewhat stable state.

Any product in particular which contains caffeine not highly recommend when one suffers a hangover and they have to go out for a job interview.

If a person consumes caffeine and they stay at home to recover then it might be preferred maybe once or twice only. But if the person needs to go outside for a job interview it will help in keeping the person alert, but caffeine causes further dehydration in the system which may lead to a stomach ache and no person wishes to be in that state especially during the interview.

If the hangover is worsening the condition of the individual in the morning then it recommends that the person take a pill or a painkiller such as aspirin or ibuprofen as it can reduce the headache.

Also, carry a few pills along as if it’s needed before the interview, there are pills available for consumption. But the only disadvantage would be that if the pill consumption is too much then it may lead to liver inflammation inside and may slowly start damaging the liver.

It recommended that a person should eat something when they have a hangover, but the food eaten should be the right food. Something like toast which is slightly burnt in the middle along with something rich in proteins is preferred.

Toast helps in building back blood sugar in the body and the burnt portion of the toast containing carbon helps remove all the impurities inside the body caused by alcohol. Proteins help in breaking down the amino acids in the system and stabilize the person.

A person suffering from a hangover the next day their eyes turn into a reddish color and if they do not do anything about it and go in the same manner for the interview, then the person interviewing gets a hint at once that the person is drunk which may lead to losing the opportunity of the job.

So it recommended that the redness of the eyes should remove by using eye drops. Follow the instructions on the bottle and within half an hour the eye drops may start working.

6. Carry on the Daily Routine:

The person needs to look fresh and active when they go for the hangover interview and shouldn’t have an appearance as a drunken person. So the person going through the hangover must carry on with their daily routine like showering and grooming themselves so that they look good in appearance. Also, wash up properly while showering to remove all the odor of external alcohol on the person’s body.

After a night out, the next day in the morning while going through a hangover the person always sees dark circles appearing below the eyeball on the skin.

So by using a bit of makeup, women, as well as men, can benefit from covering up these appeared dark circles as the people interviewing in front do not get a hint that the person comes for the interview may still be in a drunken state, in turn, laying a bad first impression.

It is always advisable for the person to do a double check before leaving the house to check that everything is in order on them. It helps if they have someone in their houses such as spouse or partner or a friend or they should at least have a mirror to look at them and see that everything is okay.

Before leaving the house the person should know that their head isn’t working correctly for the time being and the person might end up saying something stupid and inappropriate during the interview. So the person must rehearse well in front of a mirror before leaving what they will respond to and answer to the questions asked in the interview.

Rehearsing for hangover interviews also helps motivate the person that despite a hangover they are somewhat mentally ready to face the interviewer.

If the person wants the job, it is necessary that even though they might be on a hangover, they need to reach the interview on time and be punctual. It helps to lay a good impression on the person.

If the individual reaches the interview place late, then it just doesn’t lay a bad impression of the person’s character but even the appearance of the person question at that time as the interviewer may start thinking why this was a cause at the point of a hangover also might consider by them.

11. Always know when to reschedule:

At that moment, it may not click inside the head of the person that they aren’t ready to give the interview and go anyways for it as they might damage their impression and personality on the interviewer.

There might be a risk that the person might puke right in the middle of the interviewing room or can get a bad stomach ache.

This kind of situation may also lead to bad behavior or fights at the time of the interview. So always know well that if the individual is really mentally prepared for the interview and if there are doubts then always think of rescheduling.

In the morning if the person is suffering from a hangover then they should always start consuming water to retain all the fluids properly inside their body. They also should carry water along with them in a bottle and take sips frequently if they think they are getting a headache.

It is really necessary to even hydrate during the interview as one can excuse themselves and have a sip of water. It isn’t an unprofessional way to drink water in the middle of an interview as the interviewer may also think that the person is parched.

13. Keep everything to the point:

Though the mind won’t be at a stable point during the interview still the individual knows that they have control over themselves to some extent. So all the answers they give in response to the questions asked during the interview it is necessary that everything is kept straight to the point.

There should not be any long discussions are done by the person interviewing for the job cause at some moment the discussion might not relate to the job at all.

14. Have a mouth freshener:

Before the interview is about to begin, the person should realize whether they have bad breath which is very likely. So always before the interview starts to use a strong mint or mouth freshener so that there is no alcohol breath coming out of the mouth or present in other areas of the body.

If the person is having a mint then they should have it before so that they do not keep on chewing it in the interview and need to spit it out before entering the interview cabin.

It is likely that if a person is going through a hangover, then they may lose concentration many times during the interview. So they need to realize when it is happening and stop thinking about other things inside their heads.

A pause sometimes during an interview is recommended but not a long one rather than just blabbering about other nonsense as the pause is considered as a thoughtful one by the interviewer and he knows that the interview is being taken seriously.

The whole concept of an interview if the person wants the job, no matter whatever conditions they are in the need to stay focused for the entire interview. It is difficult if the person is going through a hangover.

In this case, the person should choose a spot in the room just behind the interviewer and concentrate on it. With this there is no loss of focus and the person taking the interview assumes that concentration is on them itself not maintaining too much eye contact.

17. Never fidget during an ongoing interview:

Whenever a person fidgets or gets distracted, it is because they are nervous, are bored or just want to look or think about something else at random. But if a person is having a hangover, then, unfortunately, their thoughts lead to thinking all these three things at the same time as they might be wanting to leave or are feeling very sleepy.

So if this ever happens, realize it at once and either pinch your arm or your hand to stay alert or bang both knees together in a way that it doesn’t make the interviewer aware of it.

Staying calm during the interview no matter what state you are helping. This can be done by taking deep breaths which will help the person relax and stop thinking about the fact that they are going through a hangover.

With this, the blood flow in the body will also receive enough oxygen with which freshens are got back in the body and then slowly exhale all the unwanted air outside the body so that the person feeling relaxed than before.

It’s a great way to remove any unwanted pressure on the person as if they do wear something really unique and eye-catching such as a particular tie, a scarf or some jewelry it will completely remove the pressure as the people might fascinate about it and may start thinking about and there is no complete attention on the person giving the interview and he can proceed through it with peace.

20. Learn from the Experience:

After a person goes through such an experience in their life than they need to ensure that it doesn’t happen again that they drink and party one day and have to go for an interview the next day. So the person should always have some level of self control over them and should realize that it may cause a bad reputation for them in the future.

So for a person who is having a hangover and has to go for a job interview needs to get themselves together if they are properly stable enough and go for the interview if they can handle themselves. If it isn’t possible then reschedule the interview for another day and recover at home.