There are so many things that go through the mind of a candidate while considering a job offer. Whether to decline it or not could be a dilemma in one’s mind.

If one is pressured into making a decision, then there have been instances where one had repented the action at a later date.

However, is it possible to change that decision at a later date?

For example, if one rejected an offer from a company, can one go back and apply at that company again after careful deliberation? This article here tries to deal with factors on how to get a job offer back after declining it. 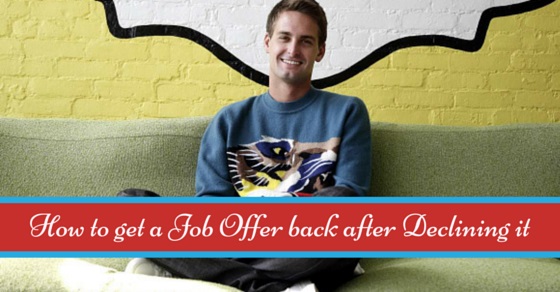 Turned Down a Job Offer? It Is Possible to Go Back

Is this question ringing you a bell, then surely you might have also gone through such a situation (Well I have been).

Whenever making good career choices, you need to do it carefully. Recontacting the employer for a job offer after declining it earlier sounds a bit drag but can surely be given a try.

As per a few experts from the HR department, the employer would not mind to reconsider you if the opening is still unfilled. The reason for it could be that the employer needs to screen the employee from scratch as he was already convinced by your skills.

Craig E. Schneier, executive vice president of human resources for Biogen Idec Inc., a Cambridge, Mass, pharmaceutical company, agrees. “If I had wanted to offer the person a job once and they came back, I would be an idiot to dismiss them out of hand,” he says. “That would be saying my first judgment was wrong.”

If we think of the other case, then the max an employer could do is say ‘NO‘. The reason can be any, maybe they do not trust you anymore or the vacancy might have been filled or any other.

So if you really think, that you need the job, the best thing you can do is to contact them.

How to Get a Job Back Which You Turned Down Before:

Trying to get back the job after declining it once or going back to a former employer for a job is a drag in itself. Though most of the people think that it could hurt their self-respect, its actually their ego that stops them from approaching. So you need to control your ego and move forward.

Declining or quitting any job if done on a good note, then you will never have such trouble. Even your employer would be more than happy to help you.

But if you feel a little problem for getting reconnected, here are a few tips you need to follow

The next steps after getting a good response are,

Declining a Job offer after Accepting – What to do?

1. Reason for skepticism from employers:

If one is going back to a job offer that the person once rejected, there could be lots of reasons for the skepticism by the employers.

One of the explanations could be that the company is worried that a candidate is coming back to them because of the lack of opportunities in the market.

In such a scenario, the company would worry that the candidate would leave, if exposed to better prospects. Maybe the candidate hoped for a better salary, which never got offered.

It could also be that the company is worried that the candidate is indecisive and keeps changing mind, every five minutes or so. These are some of the reasons on why a company might not consider an applicant who once rejected their job offer.

2. Reasons why a company never got back to you:

There are many reasons on why a company does not respond to an applicant, especially the candidates who have already rejected a job offer, at an earlier stage.

One reason could be that, after rejection from one applicant the company could have got their candidate from the other applicants. The company can also consider that the applicant is not dedicated enough about the job applied to.

Another more simple reason could be that the concerned authority was not available for that particular period of time to get back to the applicant.

3. How to re-approach a company after declining a job offer:

One thing most candidates seem concerned about is how to get a job offer back after declining it. There could have been various reasons for rejecting a job offer at that point of time.

However, if the reason is no longer an issue and one wants to get back the job offer, once declined, the best way is to approach the company and the HR manager directly and inform them about the whole thing.

Make sure to be totally honest as to the reason for the first rejection and why the decision changed. Assure the company that the same thing would never occur again. If one is lucky enough, the company would get back to the reapplication after considering the reasons.

The company must have found something in the applicant to suit the job, hence they might see the potential again in the candidate and would be open to offering the job again.

4. Is mail or Phone a better way to approach:

If you have rejected a job offer some time back but now changed the mind about the offer, then you would sure be confused on how to approach the hiring manager or the company again?

No need for any worries, one can always approach the company to inquire about the offer, to see if it’s been taken off the market, having got the required candidate or if it’s still available.

Make sure to call personally the manager or the HR of the company, rather than to drop them an email.

One can also go on to say that circumstances have changed and one would be open to the offer, once again. If the company finds the reason genuine enough and they still are on the lookout for a candidate, they might be open to resend the offer.

5. How you rejected the offer:

The main thing to consider about how to get a job offer back after declining it, is to take a look at the way one made the rejection.

One thing to make sure is one never ever gave any indication to take up the job, prior to declining the offer at a later date, thus taking the company and the manager for a hike.

Also, another thing to think about is that one should not remain quiet without appropriately responding to the job offer, thus leaving the manager to feel insulted.

6. If one rejected the offer in a pleasant and firm manner:

If the candidate rejected the offer from the company in a polite manner, then the path is more open to reapproaching the company about the offer.

What one needs to do is to reiterate the original view about the job offer with the recruiter or the hiring manager. Then go on to make them understand the reason for the change of mind and how things would be different this time around.

In case the vacancy is no more open, make it easier for them to bring you up to date on it. At the same time, leave them with the option to reapproach you at a later date, if any other vacancy comes up.

On the other hand, if the candidate never gave an inclination to the company about taking up an offer, only to later go and reject it or if one kept the hiring manager or company waiting without giving an appropriate answer to the offer, re-approaching them could be a task in itself.

The best approach on how to get a job offer back after declining it would be to address the chief concern first.

Begin by letting the recruiter or hiring manager know that one is totally wrong for inconveniencing or even offending them earlier. Then go to address the other concerns that the company might have.

8. Consider if to re-approach the company or not:

The candidate would also be confused regarding the availability of the job vacancy when considering how to get a job offer back after declining it.

However, in case if the job does remain available even after a very long time, one would have to think about the reason for it. Always make sure that the company or the employer has good reputation in the market.

Another thing to mull over is that even if the job offer is still available, one might have problems reapplying as the company would consider the candidate as someone who declined the job offer, for no reason whatsoever at an earlier date.

In such scenarios, the candidates need to be fully prepared to answer questions about the change of mind with regard to the job offer. Make an effort to turn up with a suitable explanation for reapplying for the vacancy still available.

9. When you know you might have made a mistake:

On the other hand, there are other scenarios where one knows they might have made a mistake in rejecting the offer outright, at the moment.

Nevertheless, now with a changed attitude and mind about the job offer, one would like to find ways on how to get a job offer back after declining it.

The candidate can begin by planning out the entire conversation, ahead of time so that one would be ready to explain the change of mind to the recruiter or the hiring manager, whenever required.

Going Back on a Job Offer you Initially Declined:

Asking a job offer that you have initially declined is not so easy. Though the employer would be happy to see you back, but before requesting there are few things that you need to consider. Few of them are

Also, let the company be aware of how one came to the current decision. In some cases, the hiring manager might be happy to rehire the candidate that has reapplied, as the company was keen on getting the candidate at an earlier date.