With the increase in globalization, all the companies are striving to reach as many remote and interior places as possible for their future expansion in the global market. And since they need to promote their business all over the place, the role of the bilingual employees is found to be crucial in these stages.

With research, it is found that more and more companies are going for bilingual employees as their working partners and many other purposes. Be it a short term or long term, bilingual people are mostly on the advantage side as they can speak multiple languages. 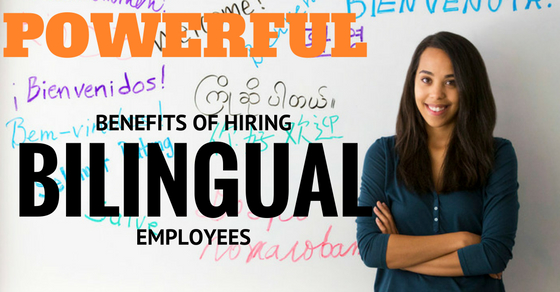 Who are Bilingual People?

Bilingual people are those people who have mastered the art of speaking two or more languages in a native accent and can easily mix up with people from those communities without much difficulty. They have great communication power and good speaking capability.

A bilingual person can have multiple advantages as it helps in bridging the communication gaps and bring about a greater difference in interpretation and communication.

According to a recent study from the Bureau of Labor Statistics, over the next 10 years, the demand for bilingual employees is expected to increase by 18% with 70% of businesses foreseeing Spanish-talking skills will be exceedingly looked for after among candidates

Benefits of Being Bilingual in the Workplace:

There are several reasons why companies prefer bilingual people working under them. No doubt, they have numerous benefits.

The main reason for which they are hired is being bilingual, they can handle more languages which means they can reach greater diversities than any single language-speaking employee.

Additionally, they have this extra edge over normal employee which makes them preferable candidates for any company.

Nowadays every company is trying to reach out to as much culture and languages as possible for the growth of the company. So being bilingual gives you additional advantages over the normal employees.

Benefits of Having Bilingual Employees:

There are numerous benefits of hiring bilingual employees. No doubt, their extra talent is put to good use in the companies, at the same time they too get to exercise their additional knowledge on other cultures and language as well as put them to practical use. Some of the benefits are mentioned below in detail.

1. Can replace any translator:

Need to reach out for a native place of an employee? No worries. Just have a call for the employee and get things managed the way you want without extra charges and any permanent posts.

A bilingual employee can bring down the expense by saving the chance of opening an additional post for a bilingual speaking person, who can interpret and translate other culture. They can do the job at no extra cost.

All you have to do is identify those people who have more than one language-speaking capability and get them working under your premises. They can solve a company’s half the language difference issue as well as save the cost of opening a new permanent post for this job if the company is going through a tougher phase.

3. Expand the horizon for a company:

It is a wise decision to hire bilingual employees as permanent people working under your guidance. Not only in the present, but they can also prove themselves beneficial any time, even in the future.

They help in the expansion of the boundary of the company farther and beyond and assist in bringing the other interior cultures nearer.

All it is required to be done is hiring a good bilingual person and see how the limits of the company go beyond normal expectations.

Your company can have a whole niche or section missing in the workforce because your company has only a single language speaking employees. At those times, you need to make a decision and hire some bilingual employees for greater benefits.

Not only they can understand the problems and issues with people of other communities, but they also provide them with solutions that can prove to be beneficial for them as well as for the company as a whole.

Therefore, bilingual people help in increasing the existing level of your company.

5. Increment of the result:

By hiring a bilingual employee you give way for such a person who can communicate flawlessly with people of other states or other partners who are from different cultures and are more free and easy to communicate in their native language.

Also, you get a person who speaks multiple languages and can interact with various distributors and suppliers all over the world or in places where your business stands.

Also, these employees can make sure your business expands to places where it is required, thus, improving business expansion and increasing the end productivity by a huge number

6. Give a tougher competition to other rivals:

Getting into the world of marketing and business implies, facing tough competitions coming from various other rival companies. They have the experience and also people for the job and you require the same to give them the competition.

For that, hiring bilingual people can prove to be beneficial as well as time and money-saving. Directly hire bilingual employees and watch how your business is well handled and expands without much issue.

They are adept at handling customers of various races and can do it quite flawlessly. Thus, they help in bringing the customers close to the company and gain their confidence also survive the competition.

7. Reach out for some interior groups or communities:

As a company and employer, the most important aim should be reaching out to as much community and people as possible for the growth of the company and increase productivity.

And this cannot be always possible by single language-speaking employees, who won’t be able to understand a language other than their native language. This is the time you should go for bilingual people just for the company’s profit.

The people from the different communities can bring about revolution and help to reach out to other communities whom they think can convince the company’s profit. At the same time, nonbilingual people would require extra translators and other mediums to reach out, which is not always so effective.

If you are just a startup company and require expanding your business through a wide range of communities, you need to hire a translator or an interpreter.

Hiring these people never come cheap, and since you’re just a startup, you won’t have enough resources to hire them. So the best alternative would be going for bilingual people.

You need to select people for the job from various communities who would be able to speak different languages as your regular employee, and help your business rise as well as give them a chance to exercise their talent for your business and benefits.

Whether the bilingual people speak your target language or not is not that important. But as long as they can speak multiple languages they can be put to exercise.

10. Can do the job of the interpreter as well as a translator:

You don’t require creating an additional job post for some temporary work. Like some bits of translation or conversion of documents into the native language. A bilingual employee can do the job without much difficulty.

All you’ve to do is get many such employees under your company and get the job done whenever the need arises. Also, at times, they can help you manage affairs by acting as in site translators and get communication work done for you efficiently.

Bilingual people are effective multitaskers and can handle multiple assignments easily. No doubt, their nature of speaking too many languages act as proof.

If the work of translating and finishing up the task is given to them, a single person can do it without much issue and get it finished well within the period provided.

Whereas at the same time a single language-speaking employee may require the help of another medium to translate the task first, then complete it, which would consume a lot of time.

As a company sets up its first or any new base in a particular place, it first needs to get familiar with the needs of the local people. The locals are going to be the major consumers, so knowing them or making them understand their company is very crucial.

13. They have high-class listening and communication skills:

While hiring bilingual people, you not only get people who are adept in speaking multiple languages, but also those people, who are efficient in listening and communicating. They can use it as bringing in consumers and suppliers all over the globe due to their excelling communication factor and listening potential.

All these people get to exercise their talent, so in one way they increase their efficiency day by day and get more and more knowledgeable in the particular trade or consumer handling.

Not only bilingual people are multi-taskers, but also they are good task switchers and can efficiently handle new tasks and learn them quicker than normal employees.

Being a good task switcher, they can easily go from general interpretation to arrangement of tasks and then again to another task which has completely no relation with the previous task.

Not only bilingual people are good communicators, but also they possess a good confidence level that can bring about a good change in the industry. So their chance of succeeding in a particular task is quite high.

Also, they are such kind of people who can win hearts with their manners easily. Additionally, they get to have increased performance in whichever task they get hold of.

Their positive attitude can also change their surroundings and make others feel positive. In that way, they change the overall atmosphere of the workplace.

Even if they do not know the particular language, their way of interaction also gets people into a comfortable position. This is a quality that takes years to build up in a particular person, and bilingual people have in them naturally, or you can say they have developed it themselves without much issue.

So take some bilingual staff with you in your next business meetings and liven up the total charm of the place.

These are some of the most important benefits of having bilingual people working under your company. Also, not only bilingual people possess all of those above qualities, but also, they are very frank and good people to communicate with. You may find them quite comfortable to talk to any other person.

They are quite a confident bunch of people who can easily win the confidence of other people by only communicating with them the way they want. They know how to speak and where to speak what.

So give them a chance and see the changes they bring about in your company.