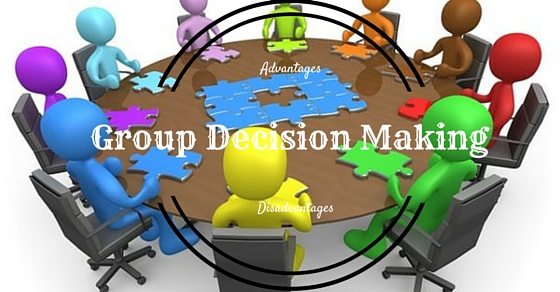 What is Group Decision Making?

Group decision making is a concept of giving a topic to a targeted group of people where the individuals collectively decide their opinions.

After collectively a decision happens, then it can’t change by any member of the group or from anyone outside the group. Group discussion always consists of people with two or more individuals.

Decision making which is an important process in any organization is very essential to do proper research and choosing the right method before taking up a decision at the workplace.

While taking decisions related to the workplace, including other employees part of the organization is also very important.

Decision making holds a pivotal role at work especially when we are dealing with bigger complex problems. To make this process a little simple, we need to select the best type of decision making. So, the leader should be responsible for taking up a proper kind of decision-making process for effective outcomes.

The best decision making can happen only by proper research, information gathering and getting in alternate solutions. To achieve this a proper step by step process should follow for thoughtful and deliberate decision making.

There are many disadvantages as well as advantages of group decision making. Let’s study them in detail with the following points given:

Well, as a group has a lot of members and they as individuals come from different backgrounds so ultimately they have unique and different ideas and opinions regarding the matter at the hand.

All the ideas may be as unique and better in comparison to individual decision making. With the help of the number of ideas, you can create a large number of alternatives and at the end finally can come to a successful conclusion.

2. Participation and interest of the individuals:

When a person dedicated and interested it promotes more innovative ideas and plans which make decisions promising. When interested people share their ideas the group discussion more actively participates and effective.

The active members may or may not be the expert in that particular topic but their opinion still matters because of the participation and dedication shown.

The members in the group must have an understanding of nature because all members have to accept the decision no matter what the quality may be as the decision affects in the favor of the group as a whole.

Acceptance of the suggestion and opinions bring motivation and eagerness to the participants within the group, thus generates a quality decision.

4. The collective contribution of ideas:

The group discussion helps in removing the barrier of monopoly in the decision-making process. At times if a decision happens by a single individual it is unreliable. Hence with the help of having a collective idea choose the factor of unreliability removed.

A decision by a single person can be partial and mainly works in his favor so collective decision making is important because it can favor all the people in the organization.

Active participation from all the individuals of the group helps in building the morale of the team and builds a healthy and coordinative relationship among the members of the team of the particular group.

As this happens the members develop certain skills of the decision-making process which benefits the group members and the group as a whole.

The group decision-making process is more of collective participation so it is, in turn, democratic in comparison to the individual decision making which is more autocratic.

When the decision is democratic, it is more easily perceivable and acceptable and in tune with society, we live in. Thus it is always preferable that the discussion shared with more than the two individuals.

When a group is sharing their ideas and opinions it passes more information and some ideas compare to the individual decision-makers who will have limited ideas confined to his limited knowledge only.

So group decision making or group discussion is far more of an advantage and beneficial in making a clear and accurate or definite decision that will affect the result of the plan.

The information from the expert is to the point and the deliverance of the ideas provides by them is more quality assurance instead of general opinions as the expert might have some background knowledge or experience regarding the matter discussed presently.

For this, an expert might already involve in the group or he calls from outside to advise the decision that is to make.

Group discussion is a process where a large number of ideas are put forth in front of the group and a decision needs to make which will come in favor of both the individual and the firm.

For this verdict to be decided, voting is used to come to a common outcome acceptable by all the members. One member is given one vote, and the opinion which receives the most votes is chosen as it is in favor of the functioning and working of the firm leading to its development.

The bigger the size of the group, the larger is the time consumed by them. Time consumption always arises when it comes to group discussion.

In the group discussion, all the participants involved have their ideas which are their favorites, in turn, protecting their interest. This brings disparities among the members in the group which is not very healthy leading to personal conflicts among them.

This in turn obstacles in the decision-making process thus reducing the efficiency as well as quality in deciding as a whole by the group.

3. Being silent in disagreement:

At times when the decision process in groups is being carried out, some members agree in favor of a certain decision just for agreeing or following the norms agreement.

An individual may agree to the point by not standing up a firm of his opinion which may contradict the opposite persons’ opinion. This discourages the person to make quality ideas and opinions and standing up firm to his decision.

When an individual of the group remains silent at the time of the decision-making process, one of the reasons may be the social pressures in that particular environment. Thus this leads to the failure of being a good member.

The social pressure of the group can affect the individual’s mindset as they may be very strong which can affect and change certain traits and qualities of the individual, in turn, changing his behavior entirely which affects the decision.

Some ideas are presented within the group. At times the members of the group may only focus on a certain number of ideas, one or two alternatives only and they may not focus or come up with other ideas that may benefit their group and the individuals that it represents. Thus it causes all the members of the group to limit their choices and stuck to only a few ideas.

6. Against the goals of the organization:

When the goals of the individuals do not agree with the goals of the group as a whole this situation arises which will lead to disrupting the work behavior of the organization and not reach the goals and objectives of the firm quickly.

7. Uncertainty in the risk-bearing factor:

When the decisions are made by the group, the factor of risk-bearing will always arise. So at times, the group may opt for proceeding towards taking less risk or towards taking more risk for the group as a whole.

When a firm opts for taking a greater risk it may yield in getting a higher and greater reward after the objective has been met. But to achieve success in the firm, some kind of risk needs to be undertaken by the group.

This method of doing so is known as procrastination, the members of the group avoid such tasks which are high in priority as they do not study them or find alternate solutions to replace them. Don’t discuss them but instead replace them with tasks of less importance at that moment.

At certain times, there might be a rush that a decision needs to be carried out by the group at that instant as it is a hurry. So at times when the group comes to announcing a decision at this moment, the decision rushed into making not thinking about the future consequences that may arise for the members of the group and the firm.

The consequences which may be unfavorable not give enough importance by the members of the group while the decision-making process carries out.

10. Responsibility denied by the leader:

In every group, a leader appointed by the members of the group who is responsible enough to see whether everything is happenings in an orderly manner. Before carrying out a decision the leader appoints certain committees to provide help.

When there is not enough time to carry out a decision unanimously and there is a hurry to implement a decision then the responsibility of future happenings after the decision has been put into effect is given to the committee by the team leader leading to an irresponsible attitude and behavior.

The group discussion concept considers the working of many individuals as a whole in harmony and unity to reach the goals and objectives of the Organization. But at times to get their opinion influence by others, certain Members of the group overuse their authority and dominate the group and their Individuals.

In doing so some of the members start maintaining a distance from the group which leads to being less involved in the group activities and decision-making process thus leading to losing the concept of a group.

The concept of group discussion is two or more people carry out and formulate decisions in favor of the firm. So this concept can be expensive for money, time, man-hours and energy.

To this, it also considers that if the group as a whole gets a large contribution then it knows that the individual contribution of each member is less.

In a large group as a whole, at times a certain smaller number of groups also form with a few members as they think they are better and different from others. This concept is known as ‘groupism’ which itself is a very negative comment.

So with this, a large number of informal or smaller groups form not considering the one large group as a whole which leads to negative comments and resentment towards other people inside as well as outside the group harming the firm.

Group discussion is effective and preferred when there is a big matter at hand where views and opinions from a different individual can equally contribute to a result of a successful decision.

It is more of an advantage when it is a topic related to the concern of many individuals at stake because collective decision making can give their views without being partial. As a single situation concerning only certain people did not involve so group decision-making activity is always a better solution for such a situation.

But if there is a particular or a matter involving limited people concerning group discussion is a disadvantage or is a backlog when such a situation is at hand.