The focus groups are the groups of intellectuals, professionals who come together to form an opinion for the new product in the company.

The focus group is the collaboration of people who come together to make an opinion, put forth their belief and perspective for the product or service initiate, in the company.

They help the company to grow as they are sort of critics who tell what is good and what is right for the company by forming their own ideas and correcting the wrong ones.

Every company has their own focus groups and they have a greater role to play in the company. Mentioned below are a few features, advantages and disadvantages of focus groups 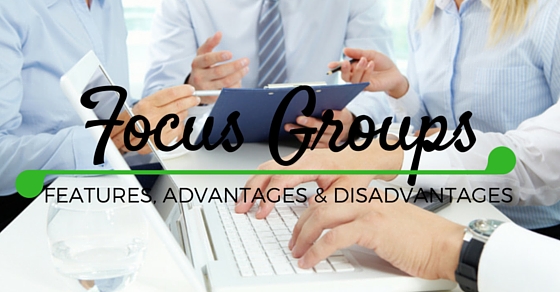 Features of the Focus Groups:

2. Professionals and experienced are the members:

The focus groups are a kind of interview conducted by the experienced and professional moderators among the groups of participants and the respondents.

The interviews are conducted in form of a panel and group discussions are held. The discussions on the important topic are done by the experts in the focus groups.

4. The focus groups are unstructured:

Neither do they have any set rules and regulations for the formation of the groups in the company.

Unlike other groups in the company, these focus groups are not formed formally but they are formed naturally.

It means they do not have to follow any particular code of conduct or the rules. This is one of the good features of the focus groups as being naturally formed they are free to express anything and to anyone.

There are no stern rules or set codes to be followed by the members of the focus groups.

6. Ideas flow freely in a group:

The ideas in the focus groups flow freely. There is no designated leader in the group who will order or who will command others in the group.

So, the ideas, the opinions are free to flow in the groups irrespective of any disturbance or the commands. Everyone gets an equal opportunity to say or express what they feel like.

7. It is a form of qualitative research:

8. The ideas, the perceptions are mainly discussed:

The members of the focus groups discuss the ideas, the beliefs and the opinions of the product or the service, concepts, ideas, advertisement or the packaging.

All these are discussed in the meeting and all the members put forth their concepts. So, this way the meetings by the focus groups prove fruitful and productive.

The focus groups in the companies do not have many members but very few. Like maximum members would go up to 10 and not more than that.

10. The members are mostly volunteers:

The members in the focus groups are mostly volunteers. They come forward to express their opinion and give their feedback for the services and the products introduced in the company. This is a kind of feedback from the ones who have used the service or the product.

So, above are some of the features of the focus groups.

Pros and Cons of Focus Groups:

Some of the focus groups advantages are as follows:

1. The discussions are kept under control:

The discussions in the focus groups can be kept under control. This is because there is no designated leader in the group and the discussions are made natural.

The ideas and the opinions flow freely without any rules and the regulations to follow.

2. Moderator is the key:

The focus groups have a moderator in them and the moderator plays a role of controlling the situation.

Like the moderator is required to keep the discussion under control and during the interview, the focus areas of the interest are taken as topics for the discussions.

As the discussion in the focus groups flows without any restriction, the space for new ideas to flow increases manifold. More ideas flow when more of the liberty is given while the discussions are going on.

With liberty, more ideas flow as the respondents are free from any control which is a big advantage for the company as well as the employee volunteer.

4. The focus groups are not static:

Any changes needed in the opinion or the concept can easily be done as the stern behavior is not required to keep discussions going in the focus groups.

5. Changes can be bought whenever required:

The moderator in the group can make changes whenever he or she wants. In order to facilitate the discussions in a better manner, the changes are needed, so that can easily be done with the help of the flexible group.

If any concept needs a major or the emergency changes, then it can easily be done with the help of the moderator and the flexibility of the focus group.

6. The results are better at the end:

The results in the end of the day are better as the things are finalized after more considerations and the changes until the employee is not satisfied with the output.

More the changes will be there, more will be the good output because when the work is done after full satisfaction, the output is automatically worth accepting by the focus groups.

So, this way the focus groups help in deriving better results.

7. The focus groups are fully equipped:

The focus groups are fully equipped and it helps the clients to make better decisions. The dynamism and the instant changes help in deriving what actually is thought to get at the end of the day.

When the stern rules are there, it becomes impossible to make changes as per the wishes but when there is no restriction, it becomes easy for making amendments even at the end moment.

So, this way not just the client gets happy but also the results are delivered to the client as expected.

As the focus groups are properly equipped it enables the clients to observe the discussions in order to get good results.

Not just this, the clients also get a chance to understand the proper research process and its findings. Apart from this, the quality helps in controlling the whole process which is beneficial for the company itself.

9. Useful insights are provided by the process:

As said the process of working by the focus group members is very flexible, it helps in providing some of the gestures which give the clients proper insights of the research process.

In short, it makes the whole process a transparent procedure as the clients get an opportunity to look into the matter in a proper and detailed manner.

10. Current position of the company is examined:

The focus groups provide insights about the current position of the company in the market. This helps in building credibility and also the trust level among the clients.

11. Helps in identifying the end-user:

The end-user and other needs of the company are addressed easily as the focus groups usually provide immediate insights and change whenever required in case of emergency.

So, this way the focus groups helps in identifying the end-user which usually are not addressed by the company as well as it’s competitors.

12. The reaction of the customers can be measured:

Due to its transparency, it is possible otherwise, it might not have been possible for the companies to make it done.

So, above are some of the advantages of the focus groups.

1. The moderators control the discussion as per his or her experience:

As said the discussions are controlled by the moderator. The level of control depends on his or her experience in the field.

In case the moderator is not experienced, he or she might face problems as the other people in the group might dominate him. So, this is one of the disadvantage of the focus group.

2. Sensitive ideas may not be discussed:

Sometimes the respondents are not ready to discuss some of the sensitive issues or the ideas which may concern the public.

So, this way the discussions get a halt and at times the discussions are not open. The discussion gets restricted and reserved which is not good for the output of the end product or even for the image of the company in the market.

With the Heterogeneity of the individuals and also the small sample size, the discussions get restricted.

Less people in a group, less ideas and opinions are generated. So, this way the group findings are not enough to form the final projections. Also, the discussions at times take a different route as they are not formal and naturally flow in a direction.

More the respondents, more the ideas and opinions come forward and only this helps in bringing the new ideas and compete in the market with the competitors.

4. Sometimes the findings are not at all natural:

Although the set up is natural yet many times the respondents fail to express naturally. At times the focus group can be unnatural and due to this, the findings may be far from the natural response which directly affects the end product of the company.

The members may fail to express their natural opinions or the personal choices related to the topic in the hand or going during the discussions. The members in the group may be hesitant to speak up openly.

This usually happens when the thoughts of another person go against to what their views are. So, this also forms one of the disadvantages.

5. The depth of the issue is not covered:

The depth of the issue is not covered at times. so, this way the importance and the depth analysis is not done. This way the research on a particular product or the service goes in vain as it is not in-depth.

Not just this, if we compare the other surveys or the methods, the focus group method is more expensive to execute. This is because each participant has to compensate some amount. So this also forms one of the disadvantage of the focus group.

The whole role is in the hand of the moderator. The moderators at times greatly impact the real outcomes. They may inject personal decisions or the personal biases which is not healthy decision for the company.

So, above are some of the limitations of focus groups.