Generally, people in the workplace undergo difficulties from deficient performance feedback in almost all organizations.

The employee review workplace feedback and its influence are present at every level of an organization. 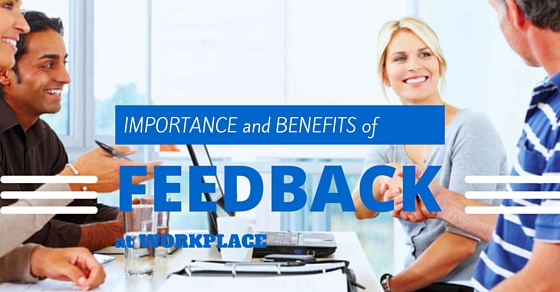 The Significance of Workplace Feedback:

Feedback or Criticism is not only inexpensive, influential and authoritative but also the widely used management device that professionals have at disposal. Feedback is influential since it shows the pathway for betterment.

Workplace feedback provides guidance to people and also shows how their colleagues perceive their performance.

Feedback is always immensely fascinating and revitalising. It fosters resilient connections with employee fulfillment and thereby directly proportional to productivity.

How Feedback Affects the Worker and the Workplace:

The workers are always fond of being involved and acknowledged with their workplace or organization.

Workplace feedback makes this possible. After working with various managers it has been monitored in every workplace that the efficient leaders are excellent listeners and speakers – they can completely comprehend the effect of their actions and manners on others.

The efficient workers and leaders believe in the time-tested dictum of knowing oneself properly. Though it is not required to pay heed to all opinions but it is necessary to be mindful of them.

a. Functioning without feedback is comparable to going on a voyage without a map:

When people get little or no feedback, they mostly become excessively self-critical or self-flattering. As they judge themselves upon specific successes rather than the overall feedback of their performance and effect.

For instance, when Allison’s promotion was overlooked for the third consecutive year, she confronted her Boss who gave her the feedback that she was not assertive enough.

She wondered why she was not given this feedback earlier which led her to lose a promotion due to fostering the wrong idea about her professional self.

b. Feedback makes one critical and analytical about his/her professional performance:

It is a hard and complicated task to be critical about one’s own professional performance devoid of feedback from others.

Self-consciousness and observation give an excellent overview but feedbacks from colleagues enlighten to augment the self-knowledge and understanding.

Thus there is no need to ponder on the conduct or performance of colleagues covertly, and also there is no need to explain one’s own aim or stance on a matter to everybody, all this is done openly now through the professional procedure of workplace feedback.

The Positive Features of Workplace Feedback:

The Prerequisites of Feedback in the Workplace:

Feedback at workplace is the data that is a prerequisite for being really efficient in the workplace.

Furthermore, the successful leaders keenly ask for team feedback to improve their performance. These leaders inherently acknowledge and appreciate the sway and influence of feedback.

Workplace Feedback is Vital for Developing Performance and Overall Productivity:

Even in children’s game instant feedback is given for interaction and the required information between the players for the continuation of the game.

Thus without feedback, one is performing or functioning blindly, it may be luck if success is achieved accidentally but the most probable result with directionless hard work will be failure.

Useful and well-timed feedback is a vital constituent of success in performance at workplace combined with the planned setting of performance objectives.

When constructive feedback is provided to employees on their functioning towards the goals, employee functioning improves.

Feedback functioning is most efficient when it is associated to a particular objective. Creating employee performance hopes and aims prior to the job leads to bestowing concrete, independent, neutral, and strong feedback.

Conveying to the employees that they are performing competently since they surpassed their target by 10% is a better incentive than plainly restorting “good job.”

Workers always should be told about being punctual and completing their goals on time. They also should be given directions on the ways to follow to be timely and efficient.

c. Method or Approach towards work:

At all times workplace feedback should be bestowed in a way that ensures most efficiency and productivity in the performance of all workers.

As everyone responds better to feedback offered optimistically and in a constructive way, always feedback should be presented in a positive way.

The feedback should present both the negatives and positives in an organic combination and should always start on a positive note as it is more effective and leads to better professional decisions in the future.

Continuous negative analysis ultimately leads to frustration of the workers and this will cause a decrease in their efficiency and overall productivity.

The Two Types of Workplace Feedback:

The first type is self-evident or obvious feedback (i.e.-information that the workers themselves can see and monitor as they perform).

The subsequent type of workplace feedback is cautiously and analytically planned feedback which is designed to be specified frequently and mechanically through a standard system.

Hence when useful feedback is created in a performance management program, it improves and enhances individual and team performance in the workplace.

With valuable workplace feedback methods, the workers function in a progressive and logical environment, thus the chances of enhanced productivity and successful completion of the objectives are increased.

The Significance of Feedback in the Workplace:

Everyone is desirous of inputs about the actions performed by them. All want and hope for constructive feedback; the shopkeeper wants feedback from his customers to improve his services, the students need feedback from the teachers for academic and overall improvement, the kids require feedback from the parents for development.

Thus it is a known fact that universally all of us need frequent constructive feedback for proper creation of the identity and effective performance.

It is through constant positive feedback that individuals advance and surpass all competitions. Feedback inspires and assists to make the justified and right modifications.

Though sometimes feedback is critical and analyses the faults which at that moment hurt, but critical feedback about the negative aspects is also necessary since it eventually helps in improvement and advancement.

The significance of commendation and positive workplace feedback for employee welfare:

A strong link exists between highlighting and praising the positive aspects of worker behaviour and increased efficiency and productivity.

Thus constructive and positive workplace feedback is necessary to boost the self-confidence and assurance of the professionals. Suitable feedback and support fosters goodwill amongst the workers which create a good place to work and helps in workplace productivity.

The workers are happy and cordial amongst themselves, thus it lessens competition and fosters cooperation which in most cases leads to improvement of the whole workforce.

Positive feedback for employees improves the workers’ happiness and productivity at work in numerous ways like growing confidence in knowing that their work is on the right pathway and their objectives are analogous with the organisations aims and policies.

The enhanced presentation, self-esteem and assurance are bestowed by the emotion of appreciation by the workplace feedback which also cultivates passion, dedication and reliability.

Privileged levels of self-confidence form an innate initiative in the worker to become practical and upbeat about new responsibilities. Positive feedback also gives rise to the constructive “can do” approach.

Feedback should be well-timed, detailed and precise:

Various company leaders and sales workers do not comprehend the consequence of giving feedback to the employees to improve organisational expansion and productivity.

When feedback is constructively and aptly specified, it facilitates to develop worker performance whilst endorsing the professional and personal welfare of workers.

Generally, feedback is the popular idea which prevails in the society and which the workers and businessmen worry about during their chaotic and busy everyday lives.

Offering feedbacks builds up employee self-esteem, confidence and drive and diminish uncertainty and misunderstandings about work expectations and present performances.

Thus workplace feedback works as a counselor and supervisor which permits the workers to learn and also upgrade the standards of his/her work.

The meaning of Feedback Shortage:

Feedback shortage is the void created when people are not given sufficient data or information concerning their functioning. This includes both the formal performance feedback and also the usual and casual feedback.

The term Feedback Shortage denotes the emptiness and stagnancy created in the workplace due to scarcity or shortage of opinions of colleagues on the performance of individuals.

Workplace feedback strongly affects all individuals in the workplace; it helps people realize how other people perceive their performance and manners at work.

Hindrance to workplace feedback and commendation:

Regardless of the numerous verification that recommend that effective workplace feedback and commendation are crucial for both the organisations’ productivity and the individuals’ well-being and professional success, several organisations fail to undertake or are simply not interested in giving constructive feedback reviews to the workers or build a culture where commendation and approval are often bestowed.

Certain hindrances to constructive workplace feedback and praise are the pre-assumption of the leader of the organization that his workers are already doing well enough and they do not need added incentive of positive feedback.

Also there maybe skepticism on the part of the workplace leader and he may feel that praise is given too freely in the workplace feedback which if practiced by him will undermine his authority.

The workplace feedback to some people may seem over-enthusiastic and thus they may be cautious about it so as not to unintentionally humiliate the recipient.

Here the objective of workplace feedback is not the reformation of the individual but just an alteration of an aspect of behaviour, the innate thought in feedback is to motivate a change in behaviour.

Thus the first step to create a change is to regularly give analytical and constructive feedback to all the people around.

Workplace Feedback fosters the culture of feedback in the workplace:

The feedback illustrates that the individual is concerned about others and also interested in supporting the people around.

Also, the deliverance of constructive feedback only takes a few minutes, but it has long-lasting productive effects on both the employees and the organization.

So feedback is both effective and quick, and the best aspect is the compassionate productive environment it builds.

Providing positive and constructive workplace feedback is a vital component of the management skill set and the professional world.

The importance of feedback has an authoritative control and effect on the accomplishments and welfare of the organization and the individual workers.

Constructive workplace feedback enhances associations between the leader and the workers; it fosters fidelity, produce fervour and dedication amongst the employees for their employer but is also influential in the welfare of the employees through fulfilling the fundamental wants of identification, encouragement and faith.

Workplace feedback has given birth to a few popular workplace ethics; as none wishes to work with a bully or stupid person, and all professionals have the fundamental right to anticipate that they will be regarded with esteem and encouragement to achieve success.