Many people go through torture and trouble of having that one friend or lying coworker who is completely dishonest and not trustworthy. Most people find it better in ignoring such people or some fine ways to be straightforward with such people so that such people won’t try to interfere automatically. 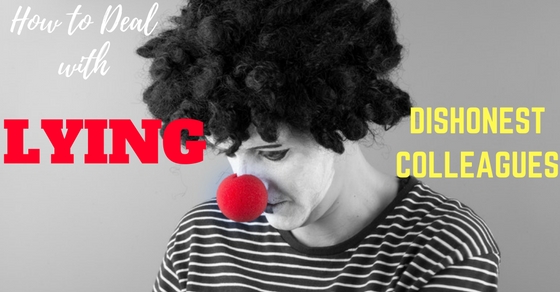 Such people who are dishonest and not capable of trust should be put at a distance because there won’t be any guarantee that this person cannot be backstabbing you or not.

It’s always advisable to identify such individuals and then necessary steps and actions should be taken so that they won’t bring more trouble.

How to Deal with a Lying Coworker or Dishonest People?

The following points will give a clear idea of how to deal with such people who are dishonest and capable of lying and cheating:

1) Try to find out why a co-worker is not honest and capable of being Trustworthy:

When someone finds a lying coworker, it’s better to find out as to why that person is behaving that way. A person is never born being a dishonest person or a backstabber. The situation always changes a person into someone whom he does not want to be.

Therefore, a closer study or info/details should do about such a person and then after finding out the problem a counseling session should do to make him realize the mistake.

2) Make them realize the consequences of being Dishonest:

A person won’t just change in seconds but that same person can change in days if realization can bring into his head that lying and dishonesty bring heavy consequences.

The realization will make a person know his own mistake and then by acknowledging, that person will not try to do the same mistake twice. Therefore, it needs to bring into attention the current behavior to that person so that he realizes instead of just staying ignorant about it.

Taking a lying coworker to a counselor may cost you some money but helping that person will be contributing to society and also doing a good deed. By taking that person to a counselor, will help in opening up that person’s mind in a systematic manner which will be a smooth process instead of just being an embarrassing parade.

The counselor will perfectly try to make him understand about the mistakes and the consequences in such a way that the person will become motivated to not repeat the mistakes done in the past.

When you find such an individual it’s always advisable to talk it out about this and let him know that what his mistake is. It will remain an awkward and heated argument for both the party, but it will be an eye-opener for both of them.

While talking to that person, tell that person about how his or her behavior is affecting the common people around him or her. It will be uncomfortable at the start but in the end, it will be a relief session for everybody because that person will try to control his behavior and not repeat the mistake.

Staying very understanding and open-minded in such a situation will help this process to go successfully and smoothly. It won’t be difficult for the person to share his side of the story as to why that person is acting dishonestly.

Many times, according to the research conducted, it’s said that a person shows such behavior because of the difficulties he or she has gone through in the past and currently going through.

While being completely understanding will help in opening up the feelings and will give them the strength to fight this struggle of removing dishonesty.

6) Accusing will not help:

When someone finds that a person is not being honest about certain things so he starts accusing and making feel very low about him. But by doing so won’t help anyone, it will just make him feel to be more miserable rather than helping out to come out from that and live an honest life.

Accusing will make him more down in such a circumstance and not coming out being honest in such a situation. He should instead try to improve and will start correcting his mistake.

7) Make note not to trust that person about personal things:

It’s rather difficult to trust such people once again therefore at the start it is advisable not to give big tasks so that it will be a risky situation in the future.

At the start, small tasks should be assign so that even if that person makes the same mistake, it won’t create a big impact on the surrounding work happening in the organization.

Trust that person in limits because telling everything will be a situation where that person may or may not tell other people. They won’t be a guarantee that a person will not disclose the secrets.

While confronting a person caught in lying and being dishonest will not help in solving the situation. Grudge and anger will never solve the situation, instead, it will create more.

A person should be a problem solver instead of a problem creator so when such a situation comes it won’t be a personal fight and personal fight often leads to long time damage if not created.

Therefore, one should be careful of not taking it personally and accusing that person of his mistake so much that, it will turn into an ugly fight.

If it is happening regularly then the person should understand what reason may be towards why the individual is acting in this way and try to provide a solution.

10) Don’t talk behind the person’s back:

It isn’t a professional attitude for a person to go behind their lying coworker back and let others know what a bad attitude the person shows in the workplace. This kind of talk further leads to gossiping.

Rather than talking behind the back of the co-worker the person should try and come up with a solution for this ongoing problem as there may be some frustration developing in the mind of the person who is lying or being dishonest.

Whenever a person confronted regarding their behavior in the workplace, they need to converse with one another simply and informally so that there is not much pressure on the person.

If the person does the exact opposite and approaches the individual in a very formal and direct way then the person may not be very open towards sharing the details regarding their behavior with the person.

12) Always look for the truth:

For a certain kind of behavior of a person in the workplace, there is always some truth hidden behind it. So the person having a professional attitude should confront the person in such a way that they may not feel afraid or nervous from them.

They should openly share their problem with the person which is true and understand what the problem of the person is and how it can be solved.

Though it isn’t something which is normally liked by the person a stage arises when the person goes out of hands and continues to lie in front at all times.

This can be in the physical form present via E-mails, texts or any other kind of documents providing physical evidence about solving the problem at hand.

Whenever a person wishes to discuss such an ongoing situation in the workplace they need to have all the required evidence and proof easily available for reference whenever the person has to encounter such a situation.

All the kinds of collected documents and other physical evidence along with any kind of back up story should be well ready with the individual so that the person inspecting understands that there are more aspects to this situation and it isn’t an assumption.

15) Present all the proof in detail:

Whenever all the evidence has been collected by the individual and before presenting it they may not find all the necessary answers they need to know regarding the situation but they should present everything they have collected fully.

At least, if all this is presented, the person who is being dishonest and lying in the workplace may understand that what they are doing is very wrong and may know that in the long run it is only going to harm them and so they may think of changing their behavior.

16) Know the impact of the situation:

When the person starts to understand that due to the dishonesty of the co-worker what impact it has on them, they understand what are the necessary steps needed to be taken so that it doesn’t further affect them.

At times knowing the impact of the situation the person understands the length of the ongoing situation and in what way they should try and avoid it from disrupting their life.

17) Stay indirect towards the situation:

Whenever the person is assessing the ongoing situation it is necessary that they keep any kind of conversations going on to be indirect, so that the person who is being confronted by the person isn’t too intimidated by the questions asked by the person regarding, why they are lying or being dishonest to them.

Behaving in such a way may cause the person to take more time in realizing their mistake and not find a solution to it.

At some moment when this is going on in the office, the person will want to put an end towards this by not paying much attention to it. It would consider as the best way to solve any kind of problem so that this situation further does not affect the life of the individual in any kind of way.

Whenever the situation is perfectly known by the person, it helps them in moving further ahead in their life and not bothering about this in the future. So it very common that a person will encounter people in their life having dishonest behavior in the workplace and have the habit of lying.

In handling this kind of person, if the person can handle such a situation too in a proper way and stay professional enough, then it will help them in their future development. So, ensure each aspect of this situation should be considered in detail for the benefit of both the people present in the circumstance.