Having a peaceful environment at work is obvious, as the organizations work in successful manner due to peace and coordination only. But many times that calm atmosphere is disturbed due to the cold war going within everyone that may at times confront many due to a number of reasons like for not obeying the orders or the rules, for not submitting the project within the deadline and so on.

Though the tensed atmosphere also develops sometimes, but that must be dealt with utmost intelligence and patience so that no one is affected neither the organization nor the employees working within. So some of the methods of confronting someone at work that too peacefully is as follows: 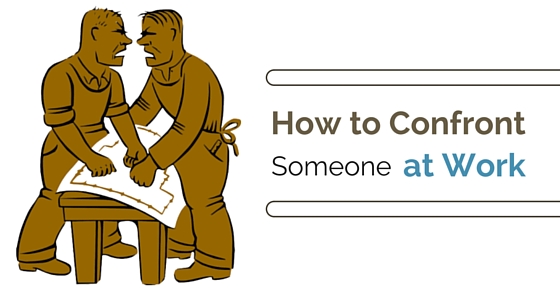 How to Confront Someone?

1. Find the problem first and analyze it in depth:

This makes to be the first step as if there will be any problem only then you will be able to confront anyone. Also, after knowing with whom the problem is, just find out the solid problem behind that as there may be a number of minute problems within you and them.

But confronting for bigger one will make sense, so find the exact problem first and then analyze it so as to know what exactly is the matter. Make sure you do not binge on the co-worker without any reason.

2. After knowing the issue, just move ahead to a person directly:

Do not let the issue become the talk of the town. You know anything in formal becomes a grape wine communication within a blink of an eye and it spread like anything amongst everyone. So, after you have known the issue, just straightway go to the respective person and talk to him or her peacefully.

3. Do not make use of harsh words while confronting:

When you confront anyone, make sure not to spoil your tongue not even in the anger, as this will only spoil you and the matter can reach upto extreme level, so be polite in the tone but be sarcastic so that you are able to shoot two birds with a single arrow.

Just discuss the issue and arrive to the conclusion in a peaceful manner. This would be more appreciable in the work environment whereby your action no third person will be affected.

4. Resist the way of e-mailing:

The issue would be serious enough that you had to confront someone, so in this case, resist the use of emailing and prefer interpersonal communication i.e. face to face communication.

5. If no direct approach is to be used, then create some sort of doubt:

Creating some sort of doubt will give another person a hint of the matter to be discussed by you. So, if you hesitate to talk directly, just follow the approach of forming a doubt so that the person gets an idea of what might happen.

6. In case of a grave issue, just write it down to the higher authority:

For seeking their assistance, just write to them through email and surely there would be some sort of change you might see in the future.

7. Start with the compliments:

Bring forth the positive attribute of the person you want to confront by making use of the statement “you are really very good” and so on. In other words, one may say that you have to be like a sugar-coated pill.

8. To Address one thing at one time:

It means while you are there to discuss the matter, just talk about the one issue and don’t unfold the whole list of problems in front of the person. Just focus on one biggest issue and do not move off the track.

9. Also, ask the co-worker regarding the discussion of an issue:

Yes, how can this be forgotten. Without the consent of a coworker, you cannot move directly to his or her cabin and discuss the matter. Just ask him or her beforehand if she or he is interested in discussing the matter in private or somewhere else.

By this approach the person would feel more secure and protected, moreover, the discussion will not get heated up.

10. Evaluate the mindset of the worker:

Evaluating the mindset of the worker includes knowing the exact reason why the problem arose.

Maybe she was burdened with a lot of work last week, that’s why or may the reason be another, so just try and know the psychology of another person too before moving ahead for so-called confrontation. Let the confrontation be peaceful and productive in the end or it may let you in some other trouble.

11. Do not be violent, whatever is the reason, be patient and follow the calm approach:

No matter how grave is the issue, just do not move to the extent of violence and stay calm. Every problem has a solution if solved with wisdom and interest of solving it.

Follow the path of nonviolence, because you are in an office not in a park. So behave accordingly, keeping in mind all the rules and norms set by the organization itself.

12. Be more objective in approach:

Being objective is not being emotional at all while you are talking. Stay morally and emotionally strong and stay on the point. Do not drift from one point and do not even talk all irrelevant as it will only waste your time and energy. Just be objective and short.

Just be focussed on the present as if the problems of past are highlighted, the matter would never come to the solution and the matter may reach the apex level in the organization. Do not let the problem reach the higher authority unless urgently required.

Preemptive means not to let the problem rise, so try your best at the initial stage to stop the problem or issue to rise ahead. Deal with it in an early stage so that the issue is not even commenced, and the matter does not reach an extreme level.

15. Think about the future:

In the end, just build up the solutions so as to prevent the problem to arise in the near future. Both of you should lend suggestions to avoid such a situation to occur the next time.

Also, make certain to conclude the conversation with some proactive and proper professional plan. The problems arise everywhere, but of whatever extent it is, solve it your own and try to prevent it either by hook or by crook.

16. State examples of the co-workers bad behavior for:

Let your co-worker know his or her mistakes so that next time the same is not repeated and also the same problem does not arrive again ever in the future.

Many problems will come forth you during the job, but you will have to decide on which problem is to be given attention and which has to be ignored, only then one will be able to confront the coworker in a meaningful manner and that too keeping the atmosphere calm and decent.

So, above are some of the points that one can keep in mind while confronting co-workers at the workplace. While confronting the co-workers, remember they are your partners for ever where you have to work, so treat them very politely or you may end up creating bad image for yourself in front of the office.

Do not let yourself, present, bad, just due to the mere problem for which you have to confront instead show your positive side of solving the biggest and even the smallest issues. Also, keep in mind you are in an organization, so don’t let the problem spread like fire as people there would love to talk about what you actually don’t want.