Mistakes can be done by anyone, be it an interviewer or interviewee but what matters is the magnitude of the mistake. The big the mistake, the more it will be visible and mistake with less weightage, will have less visual value. In an interview, not only the interviewee is nervous but the interviewer (the one who takes an interview) also has some nervousness, after all he or she also has to prepare for taking an interview. More than the interviewee, the interviewer has to do a lot right from preparing queries to making a right judgement for the final recruitment. So the common mistakes that the managers make during the job interviews are as follows: 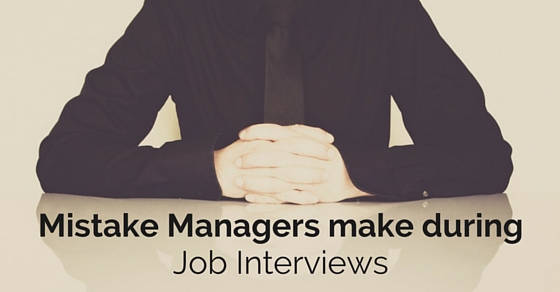 The managers if sit with leisure posture before the candidate enters, it obviously will create a wrong impact on the candidate and it sometimes also happen accidently. Having an erect posture all time is very difficult but at the time of interview, one has to compromise for the ease and comfort level.

2. Speaking a lot with the candidate:

Managers sometimes speaks allot. Remember not to speak whole lot of an essay about your company or enlightening the whole monologue of the company. Being a manger gives you a chance to listen more and speak less. Speaking less to the extent of asking questions and sub questions is fine. Do not rush to break the silence, it is just you who should provide the candidate a chance to speak by taking time. During the silent situation, you can become a better judge as it gives you an opportunity to know how much capable is the candidate in handling rough situations.

Never ask queries off the cuff. Just remain on the track. Going off the track can put you in legal troubles and it can be dangerous indeed. Just remain focussed on asking the relevant questions about job and it’s profile. Just be limited in moving ahead with the candidate or it will cost you and your company a lot.

5. Not being clear on what to ask:

Employers at times over value the skills and the knowledge of the candidate and focus more on the specific skills and knowledge and often neglect the underlying qualities like critical thinking and taking initiative. Managers sometimes stick to the academic qualification only and the real inherent abilities are taken for granted by them. When a person is not clear about what to ask, then he or she has full probability to move off the track and it affects in the final recruiting process also.

6. Crossing the limits and going personal:

Managers often are not clear about their legal limits. One must not ask questions like are you married? Are you divorced? Do you have kids? What is your age? Do you live in your own home or is it rented? Are you suffering from any sort of illness or disease? All such questions have a great potential to trigger off the limits and can summon the discrimination lawsuits in the near future for the company as well as you. The manager must know that he is at a position where he has to walk a thin line while recruiting the candidates for the job.

7. Bring in front the personal preferences:

You and the candidate may have common interests, but this does not mean you will be biased and put forth the personal preferences as the context of hiring. Just because you both have common interest in baseball or football, does not mean you both will be able to run the marathon with the same pace. So, do not get personal or emotional while you take an interview. Just remain biased free or it will land your company in great difficulties ahead.

8. Falling prey to the halo effect:

Tendency of an impression created in one area likely influences the opinion in another area. This is called the halo effect. If a candidate arrives in pleasing attire, gives you a firm handshake, answers the very first question confidently and perfectly, then you might get tempted to her, but this is the wrong approach. You should not get swayed with the first impression. Same for the reverse. A mumbler with lot many tattoos might have powers which go unidentified by you. So, do not fall prey of the very first impression as it mayput you in troubles.

9. Keeping an interview too short:

Cutting short the whole interview will prove to be a failure for you. This is because in very short time, you cannot judge a candidate’s responses and behaviour. Judging candidates rely on lot many sublte inputs. The interview which runs for long hours gives you a clear path of getting a meaningful sample for your company.

Another big mistake of comparing one candidate to another is taken into the account. One should never compare. What one candidate possess can not be another candidate’s custody. Every individual is distinct in the character and also the skills. So try and judge a person through the skills one have and not on the basis of comparibility. A mediocre candidate may look efficient in answering the queries but in actual may come out to be a dud and also the person who comes the next day may smoke all of them out. So be realistic on following the established criteria and do not grade on the new curves.

11. Being harsh, cold and impolite:

This is another mistake. Being stern to some extent as a manager is fine but being sissy and having a criminal approach is not at all acceptable. You are going to hire a candidate not a terrorist, so be polite after all only this will help in breaking the ice. Being polite helps the candidate in being little comfortable and also you put a good impression on the candidate about the company and also the staff.

This is the basic and the fundamental thing which is taken over but should not be taken as such. This is the thing which unfurls your true abilities in front of the candidate. If you are not punctual, how can you expect from the candidate the sense of punctuality. So, become the same as you want others to be. It applies in all cases, in the case of recruitment if you yourself will not follow the norms then how will the candidates follow if they became your employee. So keep in mind this thing too as it seems little but has lot of weightage.

Many times the managers are not prepared for the interviews and they tend to take the interviews in unstructured manner. Not sticking to the interview guide and being more spontaneous in hiring process makes managers less accurate in judging the candidates and when the wrong candidates arrive, it brings the organization’s working to a halt. So, be structured in an approach.

14. Self praise is of no recommendation:

Do not show your company in a rosy light unless it is not because if the candidate joins the company on the basis of all what you said, then he or she may leave the company within one or two days even after coming onboard. Be realistic towards what actually is the work environment and the approach of the company. Remember the poor hires can be extreamly costly to the organization.

Do not be negative in approach. Be positive and also spred positivity through your questions. Do not thow back the perfromances of previous candidates but focus on the present and be positive. Got it!.

So above are the mistakes that the managers make while recruiting. Those mistakes should not be repeated again if in case it happened once. Mistakes are the part and parcel of life and admitting the mistake after committing is best thing, but remember the post of manager is such that it does not demand for even a single mistake. If you make a mistake, it will not only let your company go down but also your image will drop to low level. The whole company’s working is controlled by the manager and is responsible in maintaining the goodwill of the company in the market.