Benjamin Franklin had once said that those who are good at making excuses aren’t good at anything else. Even though he didn’t spend time in an office, he clearly told us something that bears so much weight. Yes we have busy lives and we often end up missing on our deadlines. That is normal and it happens to everyone. But whats horrible is when you make up excuses for your laziness. That is definitely not accepted in any office environment. And if you don’t believe us, we can enlist to you some of the bad excuses made in office these days. Hope it helps you see things better. 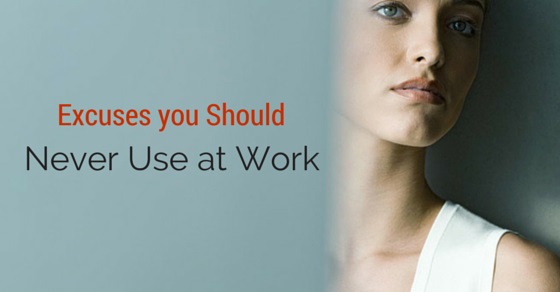 Bad Excuses not to use at Work:

1. Blaming it on the train:

One of the biggest mistakes most of us make when we are late to work is to simply blame it on the train. Do you know how unprofessional you sound when you speak like that? If you ask most bosses and managing recruiters, they would tell you how highly disappointed they get when someone tells them they missed something important at work because some train got delayed. Not only is it a turn off but also creates a bad impression. This is something you must learn to avoid.

Another huge blunder people don’t stop making often is saying I don’t know how! Now this is probably the worst thing you could do at work because it gives off the wrong signal. Most people like to use this when they have failed to finish an important assignment. It is understandable if you don’t know something and are keen on learning. But shrugging off duties and leaving projects as incomplete will make you look like a disinterested and ignorant person. And you don’t want that to happen!

3. Saying you are waiting for someone to call you back:

This is the third and probably the most horrible mistake you could be making while at work. You can’t say you are waiting to get on with work. This tends to happen when people are about to cross the deadline assigned to them already. First of all, your boss doesn’t want to know that you missed your deadline because of someone else. That is just a big turn off. Plus you won’t be making any friends in accounting and your boss will think you are very lame. You should be completely engaged with people who are a part of the project. That helps.

4. Thinking that you don’t know where to begin:

Saying that you don’t have any idea on where to begin is probably the worst thing that could happen. Yes we understand it is not possible to know everything in the world but that doesn’t mean you shouldn’t actually be doing anything about it. There are several sources to get you started! Speak to your colleagues and seniors, read some books at the library or even look up the internet. Where there is a will, there is always a way. So if you want something, you will find it!

5. Saying you drank too much:

One of the cheesiest excuse people often give for missing work is saying that they drank too much the night before and are currently lying somewhere flat on the floor. If you do this or have done this before, let us first tell you that your impression is not good at all. You have turned off a lot of people including your boss. Not only does it make you look like an irresponsible and clumsy person but also doesn’t gives you less scope to find a promotion in the upcoming months. So try to avoid this!

So you are not prepared for a presentation or haven’t completed an assignment for the week. What should be your next move? If you are an unprofessional, you will probably blame it on your body and say you have a bad headache. Saying your head is pounding is a bad excuse certainly. You do know that if an excuse like this comes up, you will still be expected to finish the presentation on the same day. Either you will be asked to take in some fresh air or take some medicine before starting work!

A horrible excuse for anyone these days is saying that your favourite electronic gadget has just released into the market. That makes you look so horrible in front of your boss. They will definitely think you are immature and not worth a promotion or raise in the future. Plus your life isnt going to go all that far if you miss work because of something insignificant like this! And don’t worry! If it’s an Iphone, then late Steve Jobs also made sure there are plenty of products available so that they don’t get sold out on the first day.

8. Your best friend came during the weekend:

So when you are expected to finish something by Monday and you fail to do so, the first thing that comes to our mind is blaming it on something that sounds realistic. And one of the popular ones these days is blaming it on the best friend. Saying that your pals came over during the weekend and made you skip prep time is seriously not going to help you get away. You will still come across as highly irresponsible and uninterested. Also don’t be surprised if you get fired because of this attitude.

Heart breaks are common and they happen to everybody. You are not the only one going through a bad breakup! So the next time you are unable to submit work on time, try not to blame it on your heartache because that will not be acceptable at all. Your boss doesn’t want to know about your personal life. The only way to snap out of it is by focusing on work. If you didn’t work focusing on your career goals, it could be a great distraction!

So you want to leave early today because your favourite singer just came to town? Well that might sound like a great way to get out of the situation and you could take a leave. But what would go down is your impression. Wanting to hear your favourite band sing is normal but expecting people at work to understand isnt. Because trust us when we say this; everyone is sacrificing something special to get there and so should you. So the next time your concert is not during the weekend, drop it! Plus the excuse itself sounds vague and highly lame. So avoid it.

This excuse will make you laugh but if you have been working for years in an office, you will definitely remember making this horrible excuse. Yes, it is possible to eat a bit too much but often we tend to lie to our bosses that we ate a ten course meal and now our stomachs won’t let us reach the office building. As smart as you think you are being; your boss definitely doesn’t think good of you. Plus it won’t work the second time.

The deadlines have suddenly started to pile up and now your boss is driving you completely crazy to submit work on time. So what do you do? Blame it on shopping. You tell your boss that you suddenly ran out of groceries and other important household materials so that you can take the day off. If you haven’t tried this, let us tell you first that it won’t work at all. He will probably tell you to wait for the weekend till you can get all your stuff back again. So if you are thinking of using this, we would suggest you to stop.

Pets are normal breathing animals. They want time and space as well. Medical care towards these creatures is important, especially if you own them. So if your dog has a physical condition it would be completely understandable as to why you want to miss work. But if he or she is emotionally unwell, then we suggest you drop the idea of bringing that up at work. It will really not work well as an excuse. In fact, it would be a big and sad turnoff for your clients and seniors.

So this brings us to the end of the post. Our top excuses are not only common but also some of the worst excuses people make every now and then. Plus if you have just started working, then these tips and ideas would definitely help you. Also it would help us if you could simply tell us whats on your mind. We are always keen on hearing! On that note, good luck and here’s hoping that you never make these mistakes at work.