For different people, success can be defined in different ways. While a candidate appears for the interview, the question that can put an impact on the interviewee is ‘How Do You Measure Success’ to understand how does the candidate measure or evaluate success.

The questions about success can help the interviewer to judge the personality of the candidate and judge whether his presence in the company is beneficial or not. 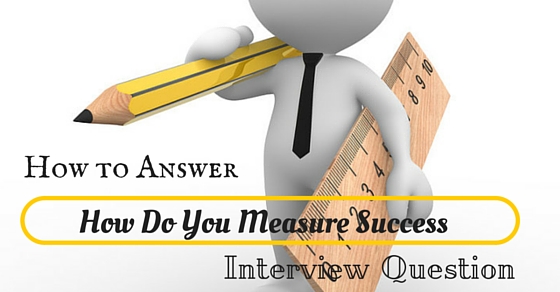 Why does the Interviewer Ask this Question How Do You Measure Success?

The motivational power here means the candidate’s ability to secure the goals that he has set for himself. Every candidate when starts his professional career sets certain goals for himself, like where would he like to see himself after say five years.

When a candidate answers this question, the interviewer can easily make out that the candidate has set certain plans for himself and he is working towards it. This quality of the candidate can help him in getting the job, as that could help the company as well.

What Does Success Mean?

This tricky question “what is a success?” can be answered differently by different individuals as different people have a different perception of success.

Here are certain aspects by which you can define success.

1. Giving at the best of what they have:

Some candidates when take up any task try to give in the best of what he has to achieve the goals for both himself and the company. Such a candidate may define success, as the way of giving away their best and get complete personal satisfaction. These candidates make use of the resources and do the best waiting for the results to come.

2. Completion of the task:

For some candidates, completion of the task defines success. Such candidates aim to finish the task on the deadlines given even if they have to compromise on certain areas related to the work. Such a candidate never delays their work which is a benefit for the company.

3. Taking best advantage of the opportunity given:

Whenever a task is given to the candidate he has the opportunity to show his expertise and how his presence is beneficial for the company. These candidates know how to take the maximum advantage of the opportunity and using it to achieve the goals, both for himself and the company as well.

4. The growth of the candidate along with the company:

Every candidate sets certain goals for himself personally whenever he starts working. After working for some time the candidate measures the growth in terms of career, then growth achieved is defined as a success by him.

Some candidates like to work in a team rather than individually. For such candidates, the success of the team is their success. They want to share the credit of the success with their entire team.

Some candidate takes the results achieved by them as successes. They measure success as the result they have achieved irrespective of the path chosen to achieve them. They are more focused on achieving the goals rather than the path taken.

8. When chosen as a role model:

When a candidate becomes a role model of some other, then he assumes himself as successful in the work that he does. Such candidate finds their success in others and tries to become the examples for others.

9. Getting the job done by others:

Candidates who can get the job done from their subordinates and achieve the goal find themselves successful. Getting the job done is an artistic thing that needs to be done properly. So such candidates measure their success in work done by others.

11. Success is being happy:

Some candidates derive their success from the happiness they get from their job. These candidates feel happy when they do their work and are satisfied with the results.

A candidate who loves to learn derives success from the experience of his own. Once the desired target is achieved they set another goal and enjoy the course of learning.

There is a certain candidate who gets their success measured in terms of the financial security they get from their job. Such candidates don’t like to depend on others for their finances and love to be independent on their own.

15. Being comfortable in your job:

Tips to Answer ‘How Do You Measure Success’ Interview Question:

The candidate while answering this question should highlight the achievements of the past. By doing so he can highlight his capabilities. He should also focus on the ways that have taken to achieve these goals.
He can make the interviewer understand his point of view through some examples. This helps him understand in a better way.

But, while answering such a question the candidate shall keep in mind the following interview tips.

The candidate when answer this question shall not pretend of what he is not. He shall always give an honest answer because he can be fake once, but later his personality is a reality to others in the company.

2. Don’t answer for the higher position:

Trying to achieve a higher position in the company is good, but giving your answer to the position is not the thing the recruiters are looking for. If the candidate answers for the position, then his wrong impression might come across to the interviewer.

3. Be aware of the goals of the company:

When the candidate appears for the interview shall do a little research about the company. By doing this the candidate can know the goals of the company and see whether these goals are in sync with his personal goals or not.

The candidate shall always show his positive attitude while answering this question. This will ensure the interviewer that what condition it may be, the candidate will always be there for all those who demand his advice in the company.

The candidate shall not analyze the success of the work done following the monetary value it generates. This will highlight your characteristic of being social.
Here are a few tips for the interview which helps to determine your success point of view.

When a candidate answers this question the interviewer wants to know that the candidate is confident enough of his version of success and is the dedication towards the work or not.

How Do You Measure Success Sample Answers:

“I measure success in various ways. While being at the workplace, my success would be to achieve the objectives set by my administrators and my colleagues. When not at work, I appreciate playing softball, so getting the triumphant spring up(winning) is a mark of my success.“

“Achievement, for me, will consistently be tied in with having any kind of effect in other individuals’ lives. And if I realize that toward the day’s end my work has helped somebody to get a new line of work or feed their family or turn their life around, then that is a success for my work.

I wish to be perceived as somebody who consistently puts forth a valiant effort and attempts her hardest to achieve my objectives.“

Mistakes to Avoid While Answering How Do You Measure Success Question:

The candidate when answers such a question shall be alert while speaking. If the answer that he gives presents the wrong impression then his chances of getting the job will decline.

So, here are certain points that he shall keep in mind not to use while answering such a question.

The candidate should never make emphasis on the monetary value of the work that has been assigned to him. By doing so he will build an image that only money is important for him and other things take a back seat when the company has to achieve its goals.

The candidate when asked the question should not emphasize the meaning of the word rather he shall lay stress on the version of success. By just stating the meaning he will not be able to make his point of view come across the recruiter properly.

The candidate shall never lose focus while answering such a question. He shall stay focused on the answer that he wants to give and make his point of view clear to the recruiter.

5. Never include too many points in one answer:

When a candidate is appearing for an interview shall not be overconfident, if he is successful in other areas of business. This quality of the candidate will make him less qualified for the job for which he has applied.

7. Don’t stretch the truth too long:

8. Personal goals shall not be given too much importance:

The candidate shall emphasize the strategy to achieve personal goals. This way he can show his dedication towards the work and interest in achieving the goals. If a candidate emphasis his personal goals, then he will put the wrong impression in front of the interviewer.

A candidate going to appear for the interview will be under huge pressure of performing well in front of the recruiter. Here are a few tips that may help the candidate in his interview.

A candidate must set some goals for himself both professionally and personally. By setting up the goals, the candidate will know the direction in which he has to move and the steps that he has to take for achieving them.

The candidate shall be confident about himself, and shall not hesitate in showing his achievements to the recruiters. This way the recruiters will get to know the capability of the candidate and the chances of his getting the job will increase.

A candidate shall always respect the recruiters and never try to overpower them. The candidate who portrays a good image remains in the good books of the recruiter which helps him while he is working in the company.

Thus, being successful depends upon the candidate himself and the strategy that he adopts to get there. So all those who are appearing for the interview, just answer that question and get that job.