What is the difference between Agile vs Scrum vs Waterfall methodologies. Here we are going to discuss these project management methodologies meaning, differences and head to head comparison.

There is a high and rapid change in the corporate world where a number of aspects occur with project requirements, support tasks and customer demands. A number of companies open up that following their traditional business is not a proper way for them to move rapidly and keep updated with the changes.

Agile vs Scrum vs Waterfall:

As many project management, product development and software development teams are making a change from the waterfall development to agile ones. Let’s glimpse through the differences between agile vs scrum vs waterfall methodologies. 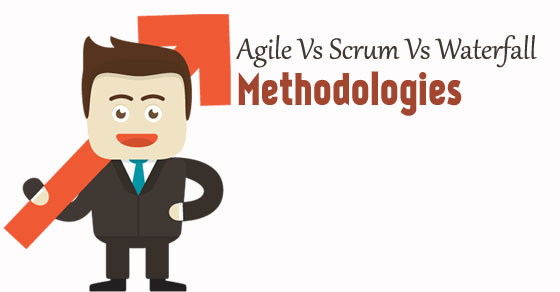 What is the Waterfall Development Method?

One sequential design process which is utilized in software development process is called waterfall method. The waterfall process model is seen as a flow from top to down which includes phases such as conception, initiation, analysis, design, construction, testing, production or implementation and maintenance.

The first model that was introduced was the waterfall model also mentioned as linear-sequential waterfall life cycle model. The model is one of the simplest models to understand and each phase is completed first before the next phase initiates and there is no overlapping in the phases. This model is one of the very first and early SDLC processes that was employed for software development.

When waterfall approach is considered, the complete process of software development is partitioned into a number of phases. The output from one phase is said to be the input of the other phase. The phases in waterfall model are requirement analysis phase, system design, implementation, testing, deployment, and maintenance.

The system design is prepared in this phase with the requirement specification from the previous stage as input. Hardware and system requirements are specified in system design phase which assists in defining the overall system architecture.

After completed of testing of each unit, the units formulated in the implementation phase are integrated into a single system. The system is also ensured to check for its faults and failures with post integration.

The product is now deployed in the customers’ environment after completion of functional and nonfunctional testing. They can also be revealed into the market after this phase.

When any product is up to the clients place, there may be some issues or problems. In order to fix such hassles, patches are released. In the same way, better versions of the product are also released to elevate the product. In order to make the changes on the customer side, maintenance is implemented.

Is Scrum and Agile the same?

The requirements and solutions of agile obtained by the association between the cross-functional and self-organization teams. A disciplined project management process is achieved by means of agile methods as it involves prompt inspection and adaptation, teamwork is enhanced by leadership philosophy, accountability and self-organization, best practices of engineering which helps in the delivery of prompt high-quality software.

They also have a business approach which syncs development with customer needs and goals of the company. Any process which falls under the concept of agile Manifesto is mentioned as agile development model.

Scrum is not the same as agile as mentioned but it is preferred as it allows more of flexibility.

What is Scrum Software?

Scrum is a part of the agile movement and also mentioned as an iterative, incremental agile software development model or framework which is utilized for managing product development. They are also defined as a flexible and holistic product development strategy where the team works towards attainment of a common goal.

Being a project management framework scrum can be applied to any network which has strict deadlines, unique degree and complex requirements. Projects in scrum move in series of iterations called sprints where each sprint takes about 2-4 weeks long. Here is a short overview about scrum and few common concepts on scrum.

Though scrum projects scale into hundreds, each team has about 5-9 people in their team. There aren’t any traditional software roles in scrum team such as tester, programmer, designer, or architect. All team members work together to complete the assigned task within a sprint.

The scrum master is one who takes responsibility to find out if the team is productive or not. The scrum process is done by the scrum master where any impediments are removed to proceed by shielding the team from outside.

The product owner is the major stakeholder and represents the customers, users and others in the process. Someone from the marketing or project management team takes responsibility to be the owner, user or a key stakeholder.

Daily scrum is a short meeting done every day during the sprint. With this meeting, the context for each day is scheduled and the team works accordingly. The daily meeting is to be attended by all the team members.

A sprint retrospective is conducted by the team at the end of each sprint. This is a meeting which represents the wellness of scrum for the team and the changes they desire to make.

What is a Sprint in Scrum?

When product development is considered, a sprint is considered as the time by which the work must be completed and presented for review. A planning meeting is an initiation for each sprint. At the meeting session, the development team and project owner agree about the type of work that must be achieved within the specified time.

The final conclusion is mentioned by the development team where they decide the type of work that can be achieved during the sprint. The product owner is also important as they decide the criteria that are to be met for the work.

The scrum master decides the duration of the sprint. After the decision is made on the number of days for a sprint, future sprints are also the same. Traditionally a sprint is one which lasts for nearly 30 days. Once the sprint has initiated the product owner is to step back as the team would take complete responsibility.

Daily standup meetings and brainstorm sessions are conducted to the challenges faced in the session. The product owner can attend but cannot answer or participate in the meeting. Only the scrum master has the rights and power to interrupt or stop the meeting and not the project owner.

What is the Difference Between Agile and Scrum?

When agile methodologies are considered, they are said to be iterative and incremental development. As we get deep into the discussion, the methodologies mentioned are opposite to traditional waterfall model. In the traditional method all requirements and other aspects are documented and analyzed before development starts.

When agile is considered the development of requirements are done, and they present themselves as software development progress in every iteration. The main advantage of agile is its flexibility as it reacts to changes and priorities quickly. Waiting for a longer period for development is avoided with agile. Large development schedules and budget changes are few problems that are solved with agile.

When a scrum is considered, it is another flexible, particular agile method. Scrum is basically a methodology for developing any product which is used in development as well as a manufacturing process. Few main distinguishing aspects of scrum are flexibility, simplicity and close communication. When simplicity is considered, there are three main roles in scrum development which includes development team, scrum master and product owner.

When waterfall method is considered, business and technical requirements are documented whereas scrum methodologies make use of user stories to describe the functions for development. The backlog is where user stories are stored with a help of pivotal tracker which is prioritized for development.

Usually recorded and deferred user stories which are used for development are stored in the icebox. When there is a need to change or alter the stories at the backlog along with a need to prioritize the list before the next sprint arrives one can adjust the team by developing new stories than the usual ones. The minds of the teams are thus changed to adjust according to the needs and desires of business.

Restarting the game of rugby is mentioned as scrum. Just like the game of rugby, this holds true for software development. Though the grouping is messy and collaborated, every team player must work hard in order to move the ball closer to the goal with each sprint.

These are a few aspects and importance of waterfall model, scrum and agile model. Agile methodology has been the latest trend in software development and hence more groups work towards agile. Scrum is another methodology which is followed in product development.

There are a number of resources too which help in understanding the methodology. Online sessions are available which are explained with clear examples with a better view. The other concepts related to the methods are also explained such as sprint and lot more.

The project management methods mentioned above is equally good. Every method has its own advantages and disadvantages and must be picked accordingly.