Men often feel intimidated by female bosses because they speak different language and men often get scared that they might say the wrong thing or say the correct thing in the wrong way.

A secret is that they might face the same problem- being called insensitive or not thoughtful enough. A few qualities that women value as a boss is the ability to listen well, team work, communicate well with people.

People often misunderstand that working with females will be easy, especially for a female. Even workers think that way that they can become buddies with the boss of their own gender- this is an unrealistic expectation and the relationship can never be perfect because of the same gender.

The working relations don’t last long which are based on such unrealistic expectations. Choosing a boss based on gender is quite ridiculous.

It seems so and as per a survey, more than two third of people surveyed prefer having a male boss as compared to one third who would like to have a female as their boss.

The reasons vary from familiarity of male bosses to holding female bosses at high standards but the result remains the same – preference for male bosses.

So what is it that makes the workers like a male boss and how to handle a female boss, someone who is not conventional and doesn’t follow the set rules of leadership?

Let us have a look in the following article:- 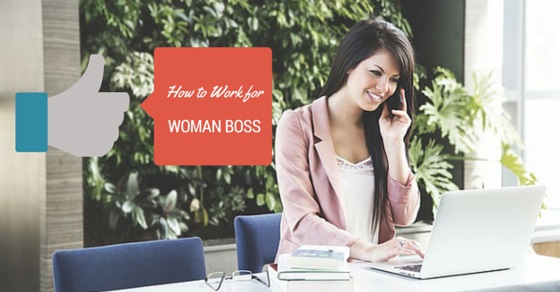 Tips for Working with Woman Boss:

1. Remember that women are comfortable in co-operation

Women are much more in networks of involvements and connections. They are not indecisive, it is just that they wish for co-operation and like to consult team members before taking any decision.

They want input from all workers and not from any one. They give chance to all and that should not be taken as their incapability to decide.

While you speak, you must have noticed that your boss nods a lot. Do not take it for her consent.

It is just an indication that she is listening to what you are saying. It means she is encouraging you to go on and not her agreement to your words.

Often it is seen that women listen more and talk less when in a meeting, it hints that she is taking an account of other’s opinions.

She wants to weigh all options before she speaks hers. Do not take advantage of that silence or nod as agreement and better be clear before you proceed with your idea.

If your female boss talks about a thing that happened at last office party or at the mall when you met her by chance, do not think that she is hinting at something beyond professional talks.

It is a very common habit of females to compare and say something related to personal experience and anecdote when they wish to illustrate a point. Do not take it as a matter of heart. Be conscious.

4. Be careful while opposing:

No one likes to be opposed and when it is your female boss, you need to be all the more vigilant.

When women are opposed, they tend to get defensive and some take it as a personal attack on their credibility. When opposed, men might see it as challenge and a sign of respect or equal treatment but it is not the same with women.

So, be alert when doing so and be polite and extra careful with the words.

5. Understand what the context is:

Women often tend to sympathize and empathize with their co-workers and this can be misinterpreted. Just like mentioned in point no.3, do not misunderstand her, rather understand the context.

For example, women often tend to say I’m sorry when they need to express sympathy and people might take it as an apology for wrong doing. It just indicates that she means to say she understand and not an apology always.

You cannot change the situation; neither can you change your boss. So, you need to learn how to deal with it.

You cannot change the way your boss thinks, operates but what you can change is the way you exhibit yourself.

Rather than persuading her about your worthiness, show your credibility. Volunteer for hard projects or anything you think will earn you visibility.

If you think that your boss is playing the credit game and taking it all for herself, you need to be aware. Start the brag campaign.

Do not accuse her of taking your due credit, just use clean campaign politics to win a promotion, to inform others of your work.

For example, when you have worked on a crucial project, you can document it by sending a mail to your boss and mark a copy to her boss or the other senior so that it is in everyone’s knowledge that who did the work.

If you helped the organization cut costs, state that you feel privileged to have got the opportunity to contribute and in the process list out the ideas given by you. It will work for sure.

8. Let her know that you understand her viewpoint:

All of us know that mostly women have to struggle a lot to reach the level at which they are.

There might be a few exceptions but most have had it really tough and had to sacrifice a lot, personally as well.

You can use this fact for your advantage. You can sympathize with her periodically and make her realize that you value her hard work.

You can say things like it is really unjust world for a hardworking women and that they need to work extra hard to prove their mettle.

Expressing such emotions would help you strike the right chord with her and make her feel that you understand her perspective as well.

9. Nurture your way to her good books:

This is quite a practical thing to do. Most women have a nurturing side known as maternal instincts.

You can make your boss like you by tapping into this side of hers. You can project yourself as someone in need of compassion and make a sweet, puppy face.

Never forget to thank her for her emotional support also. Women liked to be acknowledged for their emotional strength and do the same to your boss and make your way to her books.

10. Play to the tune of her weaknesses:

You find your boss challenging and do not have the guts to do so every time, at least show that you have a feeling of appreciation for her.

Compliment her on a work done great, for her hairdo but don’t overdo it, such that it looks flattering and buttering. Keep it to the minimum and formal.

It is not always that you might need her advice but even then, ask for it. Women, naturally have an opinion on all things and asking her for them is a positive thing, in their eyes.

This might sound a bit manipulative but it is not and it poses no harms, so don’t be guilty of trying this.

All women think that they have expert advice on topics like fitness, fashion, health etc. Keep a list of such topics and seek her advice now and then.

Just listen and never argue, it shows that you are valuing her opinion and it will help you.

12. Don’t interrupt in between:

When your boss comes to you for a discussion or for a meeting on important topic and asks for your opinion or help on it, do not interrupt in between.

Do not dole advice until she has finished. Interrupting the boss is not good. Also, women want men to listen and not give solutions, mostly.

They want you to listen patiently, so just do it.

Even after following all the above points, you might feel that your queen bee boss is not letting you get ahead or comes in your way, then you can also look for a lateral move in another department for a better boss.

Ask for the transfer due to professional reasons and not this reason. You can say it like you have some skills which you are unable to use in your current position and hence would like to move to the other position.

Always remember that your boss has the support of the upper management and human resources department.

Never think of getting back at your boss, just think of how you can make things better between yourselves. Strike the right balance – close enough to know them and distant enough to be able to leave them.

Another reason why most women are difficult bosses is since they have worked hard to attain the current level, they want others to do the same.

They do not wish to give easy way out to others, especially the female subordinates. Just be a little more empathetic and you will build a strong working relation with her. Best of luck!