Appearing for an interview is something that everyone finds terribly daunting no matter how old they are. During an interview you are faced with a number of questions, some easy to tackle, some not so easy. However, you must ensure that all times you place your best foot forward and show that no matter what challenge is thrown your way you will be willing to give your one hundred percent at all costs. The interview question inquiring why did you leave your last job might baffle many, here are some tips that should help you. 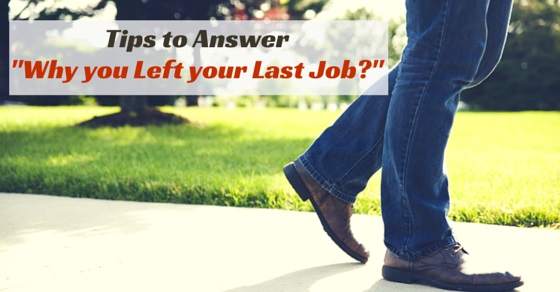 Alternate phrases to “Why Did You Leave Your Last Job?”

An interviewer will be having several reasons for asking such questions, some might not focus on the answer but assess how you are answering. Some would actually want to know the real reason for a job change. So it is always advised to understand the question first, word your answer well and then answer.

Why Do Interviewers Ask This Question?

Some of the topmost reasons interviewers asking this question are

Tips to Answer Why Did You Leave Your Last Job?

The following mentioned are few tips to answer why are you looking for a new job and why you left your last job.

1. Say your previous job had no challenge involved in it:

Upon being asked a question like this, an appropriate answer to give would be, saying that the job was something that you did not find challenging. Mention that you entered the business world, not to have security or to have a boring job; it was the thrill and the unexpected nature of the job that beckoned you and made you want to choose this corporate life for yourself.

Say that challenge is the very thing that brings out the best in you and without it you feel your work is not as good as it can be.

2. Stagnation is something you cannot bear:

Another answer could be stating that you were in the same last position for a number of years and they were unwilling to promote you no matter how much you excelled at whatever project was given to you.

You can also mention that only those who tried their best to play favorites to the bosses and seniors were the ones who ever got anywhere. Say that you are someone who wants to let your work speak for itself rather than having to stoop to such a base level.

3. The monotony of things got to you:

There are many individuals that like monotony, they feel secure. However, during your interview you can say that that typical nine to five job is not cut out for you. The thought of doing something repeatedly for days on end, to the point that you are able to do it with your eyes closed is something that just scares you and makes you feel trapped.

Adventure and change is something you long for and hence you have applied to this particular company.

4. You were looking to broaden your horizons:

During an interview, it is of paramount importance to impress your interviewer with your words. No matter what you are saying you ought to speak confidently and in a coherent manner.

Saying something like you had been looking to broaden your horizons and spread your wings is something that could indeed impress them. Companies are always on the look out to employ those individuals who think ahead and are dreamers and thinkers.

5. You wanted to go in for a bigger company:

Many people prefer to start off their careers by working in small companies so that they can gain experience and learn the ropes of the business in due course.

If asked this question, then you can state that you too wanted to start off small and learn to walk before you could actually run and now after gaining some knowledge you think that it is the right time for you to go ahead and become part of a bigger company and achieve greater things in the due course of time.

6. You left the job to pursue some studies:

In this day and age, having educational qualifications and credentials is an absolute must in order to be even considered for any job position. On being asked this question you can say that, leaving your job was to pursue some further studies and gain an additional degree if such is a case.

An answer like this is certainly an appropriate one as now the interviewer knows that now not only do you have work experience but you also have your educational qualifications to back you.

7. Be honest if you think the reason for leaving a job is appropriate:

Upon being asked the question it is important, to tell the truth. If you are lying, chances are that you might get caught if the interviewer decides to cross check with your previous place of work. Remember that you need not go into the tiny details about why you decided to leave, however, you ought to give an appropriate answer.

Do not begin to squirm in your seat or feel uncomfortable as you might come across like you were forced to leave rather than making the decision on your own.

8. Say the office was too far from where you lived:

If your answer is a genuine, yet practical one, then you should not shy away from being honest about it. A common reason for leaving a job is because commuting is a big problem. Though it might seem like a silly reason for leaving present job to you, it is actually a much bigger issue than you might think it to be.

Ideally, people do not like to commute for long hours as it takes up too much of not only their time but also their energy as well as their money.

9. Your ethics were not in keeping with those of the company:

When working for any company your ethics should be in keeping with them, if not, chances are that you are going to be at loggerheads about many decisions on a daily basis.

10. They did not encourage free thinkers:

Companies ought to encourage their workers to think outside the box and constantly come up with novel ways in order to deal with a particular situation. If a company is attempting to clip your wings and trying to prevent you from having any kind of intellectual curiosity then you have no option but to hand in your resignation.

If such is the case with you on being asked the question you ought to give an answer like this, which is straight from the heart.

11. Do not bad mouth your previous workplace or boss:

When people leave their jobs more than 80% of the time it is because they did not like the job, the atmosphere to even the boss of the company.

No matter what the case is and what aspect of the work you did not care for much, in any event at no time should you bad mouth or make fun of your previous company or the boss you previously work under. Doing something like this is highly unprofessional and creates a terrible impression.

12. You achieved all that that company could offer you:

When asked this question, if the case with you is that you left your previous job because you achieved everything that you possibly could out of the job, then you should be bold enough to state the truth.

Handing in your resignation, when you think that there is nothing more that is left to work towards, is not a sin at all and happens quite regularly. When an individual has a goal in mind, then he or she is much more driven and persevering.

13. Unhealthy workplace politics that you could not bear:

Upon being asked the question, it is not inappropriate to say that you decided to leave the job because the atmosphere was repulsive and that the unhealthy workplace politics was something that was too negative for your liking.

State that you like healthy politics and you thrive under pressure, but negativity is something that is absolute especially when everyone has one common goal in mind, which is the advancement of the company.

14. They did not appreciate your work:

When and if you are asked this question you can give this answer provided it is true, however, make it a point to ensure that it does not seem like you are someone who is constantly seeking for attention and wanting praise for whatever work you do. A mistake like this could cost you the job.

Finally, there are some stock questions which all interviewers most often than not tend to ask. So if you were previously employed by another company and are not a fresher, then chances are that you too will be facing this question.

So, rather than attempting to come up with an answer on the spot you ought to prepare an answer and gather your thoughts in this regard.

Best Answers For “Why Did You Leave Your Last Job?”

Though every candidate will be having their own personal reason for shifting the job, one should always give an impressive answer to the interviewer.

Now if you think your reason for leaving the job is pretty convincing then you need not tweak the truth but if your reason is not that strong then do not worry as here we are sharing few best reasons for changing a job.

As per experts, it is always recommended to speak the truth in interviews. Based on this let us start the list

Tips to avoid when answering why did leave your last job interview question.

As there are best reasons for impressing the answer there are also few mistakes or things that you should not use while answering as that might lead in giving a negative impression of you to the interviewer.

Let us begin this section with an important tip which is

Irrespective of what others might say you ought to only do something which you love doing or you might end up regretting your decision at a later time. Interviews scare everyone and all you need to do is try and give it your best shot and leave everything up to luck. If it is meant to be it will be, if not you can find some other job.

After all, there is certainly some truth in the common saying ‘Failure is the stepping stone towards success’ and if you fail, when success comes your way you appreciate it more.