Strengths and weaknesses are the toughest part to answer- whether in an interview or in resume.

It is the most common and aggravating question to answer. Most candidates have this question and can not answer it.

After all admitting or stating your weakness in resume and that too in front of a person who you consider as your next employee isn’t an easy task. However it has become a cliché reason for employer to hire the employee.

The way the question is answered or stated in resume is the main point of consideration for an employer to hire the candidate. 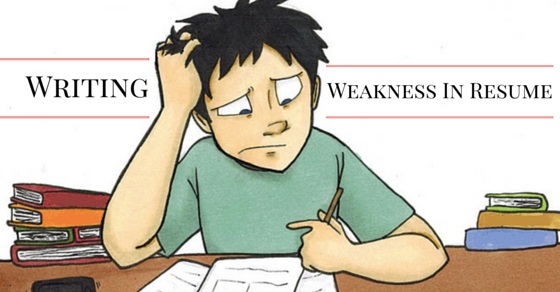 Tips for Writing Weakness in Resume:

1. Do not try to turn negative into positive:

This is as old as it could get. The HR person has seen thousands of candidates answering the same question and they know right at the beginning the trick that you are trying to use.

Some might say that I am too much of a perfectionist or that I work too hard sometimes. It only means that the candidate is hiring something and he hasn’t prepared for the answer.

2. Do not opt for not answering the question:

Refusing to answer this question or not stating it in your resume means that either you aren’t honest or you are not willing to share it with the prospective employer.

Another thing to keep in mind is not to be candid and confess every single weakness that you have like not being on time or unable to work under pressure.

It all reveals that the person is, although honest, but not fit for the role. It only reduces the chances of getting the job.

If you answer the question in a vague manner like turning the positive into negative, follow up questions will be asked when you go for the interview, like – your resume states that you are too much of a perfectionist as weakness.

How can you say that it affected you negatively?

Hence being clear is the key else it could land you in the midst of an array of questions related to the part which you do not wish to answer.

5.Do not lose presence of mind:

In post follow ups after the initial round of resumes or in organization which ask for your resumes in a particular format pre decided by them, they could ask something like – If your previous employer is called up, what would you be needed to work on as per him?

In such cases, the employees might start think that what if the answer is actually cross checked or if previous employer is called up and might get more straightforward.

This is what the employer wants you to do- get intimidated and give them an answer that would land you in trouble or lead to more questions..

6. Do not give a fake weakness:

Some people might think that writing a fake weakness in resume will help as it is not present in us and won’t hamper our opportunities.

However, it leads to more trouble as the employer might ask that as per your resume this is your weakness and how do you think would it affect in current job.

So, it is better to be honest and not try to manipulate things to a great extent.

7. Pick a weakness that is acceptable:

Some weaknesses might be acceptable for jobs that do no require their implementation. Such weaknesses can be mentioned without any fear. Cite any weakness that is not related to the related skill at job.

Example, if applying for sales job, you should not mention about being an introvert or being afraid of meeting new people.

Rather you can mention anything like not liking to experiment with new food. This way you can easily answer the question without being manipulative or being vague.

So as seen above, writing the weakness for resume is a difficult task but something that can be easily gotten over.

Selecting weakness that is small, minor and which can be worked upon can also be a way of writing resumes. It also shows that you are ready to work on it and are accepting it.

Acceptance of flaws is major part which every employer wishes to see in the prospective employee’s profile. It shows your humbleness and that you know yourself. You are not hiding things.

Another way is to describe the weakness in a subtle and concise way. Don’t sound overly negative or sound defensive. Be open and precise, at the same time. Also, you need to show that you are working on your weaknesses.

State the weakness but emphasize on the working part. It is great for employee at junior’s level as it shows that the person is ready to learn and get over a flaw. So, following the simple tips above can help you in stating your weaknesses in resume.