Home Education and Beyond College & University

Schooling is the first stepping stone for any child as an introduction to the outside world. The school imparts knowledge on various subjects and mannerism to the children, hence, shaping their lives for the future so that they can face the world bravely.

A normal school these days sees children with books, bags, and classes designed with discipline. They get assignments from the teachers and are evaluated on them; further, the teacher hones the talents and skills of the child. 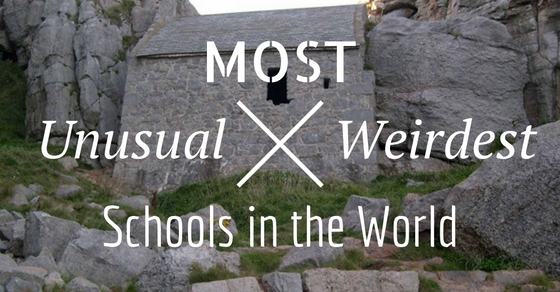 But various other schools defy the modern techniques of the education system and have created their route.

Strangest Schools in the World:

The Witch School is located in Salem, Massachusetts and was founded by rev. Ed Hubbard. The school generally offers courses online but few opt to learn physics in the college. Also, the school teaches the essentials of witchcraft and their belief system.

The school website opened in 2004 since then more than 200,000 have enrolled in their classes. Despite the heavy criticism from orthodox Christians, the school is still running successfully, where the students enroll in tier courses from across the world.

Prostitution is legal in Spain and currently; about 400,000 men and women are working in this field. This school is quite popular in teaching the art of prostitution to young men and women professionally.

Their syllabus includes the history of prostitution, introduction to sex toys and kama sutra positions, along with the business tactics to deal with the clients. Their training sessions are for a week and they provide a theory with practical classes.

The children begging on the train stations is a painful sight, knowing the fact that if they provide with the education their whole life can change for better. With this idea, a teacher from Orissa Inderjit Khurana started an organization Ruchika School Social Services organization (RSSO), to teach these children on the train platform. Since it is difficult for the children to come to the school in a different place.

These children are taught through, poems, puppetry, songs, and drama. The children can join and leave the classes as per their convenience. More than 4,000 children have benefitted from Train Platform School. RSSO also provide food and medication to the children along with their families.

The boys taught how to charm the snake with the flute, while girls taught to take care of the snakes. The current chief of the school is Babanath Mithunath Madari who ensures that the children in their community learn about snake charming.

As the name says Free School located in Brooklyn, USA and was founded in 2004. This school does not have a set curriculum or any rules to follow by the students. The idea behind the school is to allow the children to find their way.

Students can decide what they want to learn and which classes they would like to join, if they are not interested in sitting in the classes then they can stay back at home. Due to the lack of certain regulatory structures, the school has criticized heavily, yet its popularity keeps on rising.

Due to the floods caused by heavy rains the education of thousands of children is at stake along with the damage of houses and other things that happens in the villages. A nonprofit organization, Shidhulai Swanirvar Sangstha took initiative and established various health centers and schools on the boat to help people and children.

The classes happen on boats, which keep on floating from place to place, they pick up the student and leave them back to their respective place after the classes. These types of schools are highly successful since more than 100 boat schools are functioning which well equipped with a computer, internet along a small library.

This school is one of the kind where students taught in a cave. It is located in Guizhou, China establish in 1984 with 186 students and 8 teachers. Guizhou is one of the poorest provinces in China and they hardly get any help from the government.

To keep the education going on the villagers decided to start school with the cave, sometimes it takes about 6 hours for the students to travel to the school. Due to the immense desire to learn these people managed to keep up the school functioning for 23 years after which Chinese officials closed the school.

It is located in New Mexico, USA. The school is the first underground school in the USA and it was build during the heightened tension of the Cold War between the USA and Russia. The idea behind the school was to build the school where the education keeps on going if in case, the place is bombed.

The place also thought to make as an emergency shelter during the attack. The place has three doors which made of steel blast door, the underground building design in such a way that it won’t be affected by the radiation.

In 1995 the maintenance of the place shut down, due to higher expenditures and now uses as any regular school. Many children studying there have no idea about the significance of the place.

It situated in China and is one of the most picturesque schools. Gulu is a small village in highly mountainous areas of Sichuan province. The way to the school of the zigzag path made in the mountains of narrow, rocky passages.

The schools established in the late eighties but were in bad condition, with the efforts of Shen Qijun the school has renovated with a toilet and a basketball constructed in the school. While playing basketball children need to be careful not to throw the ball on another side of the mountain.

Located in New York, the school named after popular gay politician and activist Harvey Milk, who fought for the rights of the LGBT community. The school started in 1985 but fully accredited in the year 2002.

The main focus for the school to encourage education among gay, lesbian, bisexuals and transgender students who bully in the regular school system and were going through a hard time to attain education. The school does not differentiate between anyone and is open for everyone to enroll in the school.

11. Philadelphia school of the future:

It started in the year 2006 and this school is the first school which gives a glimpse of how the schools will be in the future. The students in the school do not carry books and pens to the school; they study maths and science on various Microsoft apps like One Note.

The school timings are from 9 am to 4 pm which is equivalent to the office timings, hence, preparing the students for life ahead. Initially, the school struggled to create a digital education system due to the unfamiliarity of technology among teachers and children, but now the school is highly successful and students are learning better maths and science in the school.

It located among the scenic beauty of Iceland and mainly teaches about the Icelandic folklore on elves and hidden people who invisible to normal human beings. Since the inception of this school in 1990 more than 9000 people have enrolled in the school mostly foreigners.

The school provides certification on the Elf education which can acquire within a day. They also research popular Icelandic folklore and the headmaster of the school Magnus Skarpheoinsson has written various books on this subject.

It is another unconventional school where science and maths are not taught, located in France and started by Sebastien Foucan. The school teaches how to jump, run, flip or in short it an acrobatic and athletic school.

The ideology of school is the individual to be more fluid and expresses them within the environment, with an understanding that there are no boundaries to the physical movement.

This school founded in 1986 in Lancashire, UK. Maharishi school does not teach subjects relevant to the current world like maths, science or English. Their teaching methods consciousness-based, where they teach transcendental meditation.

They commit to making children as psychic and clairvoyance in their life. Despite their nontraditional form of teaching, this school is gaining popularity among the parents and considered best in the top 2% of the schools in the UK.

The school began in 2010 with the idea to encourage women to find the right life partner. Many women in Japan are single in their 20s and 30s, previously due to parents’ involvement marriages were easier but with the rising demand for the perfect partner and higher expectations, women are not able to find a suitable match.

The school teaches women to set the priorities right and how to connect with the husband and their family. The average age of women attending the classes is of the ’30s.

Founded in 1974 by a Buddhist monk Chogyam Trungpa, this school teaches the nontraditional or contemporary form of education. Their education system is inspired by Buddhist alternative teachings.

Wherein students are taught yoga, Tai Chi, and meditation which is mandatory daily. Naropa University also provides a degree in Buddhist studies, visual arts, and theaters. They had previously hosted beat poet like Allen Ginsberg and tried to incorporate poetic department in the school.

This school established in 1937 and the oldest running school to train people about Santa Claus and locates in Michigan. It started by Charles H. Howard who was an American actor and in his early days he uses to portray as Santa Claus in stores during Christmas. To train as a proper Santa Claus, this school is best as it teaches the dressing, etiquette, and mannerisms of Santa Claus.

It is a stadium school located in Buenos Aires, Argentina. The school is situated in the prime soccer stadium. The children here do not study or pay attention to the subjects taught in the classroom, but they get to watch the most prominent soccer players practice in the stadium. In a way, this is to encourage children from a young age to learn and know about soccer for which Argentina is popular.

This school is located in Dusseldorf, Germany and is gradually attaining a lot of popularity among parents. It is a preschool for children aged from 3 to 6. This kindergarten is based on the concept of children to spend time in forests or the natural environment.

Instead of toys and gadgets, children encouraged to explore nature and play with the objects present in nature. The caretakers and teachers in this school meant to the caretaker of the children rather than leading them like in the normal education system.

The idea of school is basically to impart knowledge to the children who might be deprived of their basic rights. Even though many schools are unconventional but they are fulfilling the needs of future generations and shaping up their lives.

The teachers putting efforts among all the difficulties must be applauded since it does require immense dedication to overcome the challenges and teach young minds.

In the list, other schools do teach different subjects wherein the adults also enroll in them. It is good to see that there is various knowledge sharing platform across the world, and people are showing interest to learn them.