Trying to get a job and clearing an interview process is not easy as it seems. Nowadays, the interview process has been so difficult that getting oneself selected for a job is something like achieving something great in life. There are several times that a person may fail in their job interviews and reasons for such fail may vary from people to people. Some of the reasons helps a candidate to be prepared before attending the job interviews. 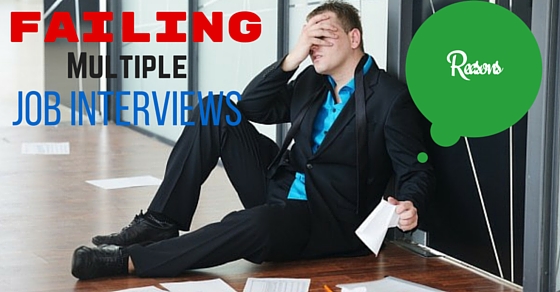 Why do I Keep Failing at Job Interviews?

Every single professional and educated person has a dream that they should get a job at a multinational company. But to fulfill such kind of dreams that person needs to clear an initial process of life, which is the job interview. But there are certain situations when a person keeps failing at those job interviews. And reasons for such fail at job interviews are,

1. Hiding factual information about themselves:

One of the mistake that people commit during their interview is that they hide things from their employers or interviewers. Most commonly hiding professional information and about their educational degrees. These kinds of mistakes can get them into trouble as well. So it is always best for the candidate to keep in mind that he/she needs to present all the information in front of the employers clearly and properly.

Most of the time while attending an interview, candidate has to bring some kind of negative attitude towards their experience in a certain field of work. And this can affect that candidate’s personality in front of the employers. Therefore, it is advisable for all the candidates that never bring up over confidence during their interview. Because over confidence can present yourself in a negative manner in front of the employers.

Most of the time some candidates are less interested about the post that the employer is offering him / her. Therefore, this can make the employer upset about such kind of behavior and they can even reject him / her from the list of candidates. So it is always best for the candidate to apply only for those posts which they are interested in, because it can save time for both the parties. And even this can help the candidate find the perfect job for themselves.

5. Being unimpressive during interview:

While attending an interview the candidate need to follow a certain type of procedure which can make them stand out better, even if there are many qualified candidates. It is advisable for the candidate that they need to work on their personality and their confidence while attending an interview. Because currently employers are interested in those candidates who have pleasing personality and are smart at the same time.

No Job offer after Third Interview:

Sometimes it happens that after attending so many interviews, the candidate might not get selected for the job or may not receive any return call from the company. And at that time the candidate needs to think about the reason of not getting a job and rectify the reasons to prepare yourselves to get a job.

2. Unavailability of the interviewer:

Most of the company owners have no time for their daily business deals and their human resource manager to select a candidate for the post, but sometimes it happens that most of the managers be busy with their daily official duty and tend to lose the track of time. During this time the manager may interview some candidates and shortlists them, but because of shortage of time. He / she may forget to call and inform them. This may be a possible reason that the candidates attending interview may not receive calls from the company.

3. Taking time to shortlist for further rounds of interview:

Some of the multinational companies have a tough selection process and most of the interview process takes 3-4 days of time. In this process the selected candidates receive regular updates about the next round of interview. But sometimes the company may take some time to arrange availability for such interview rounds. And at that time the candidate need to be patient and wait for the call from the interviewing company.

4. Company going through some financial problem:

Because of some sudden financial issues the company may lose their business and that can make things on hold for the company. And this can be one of the reasons that the company may not call any of the selected candidates for the further process of interview. Therefore, at that time the candidate needs to keep collecting information about the company’s current situation so the candidate can save some time.

One of the common reasons that the candidate may not receive any type of call and message from the interviewing company would be that they might have already selected the candidate for the job. At that point of time instead of waiting for the response from the company, the candidate can start looking for new job and save time for their own good. Therefore, it is best for the candidate that they should keep their options open while attending interviews.

Multiple Interviews with the Same Company:

Most of the time it happens that the employer may select a number of finalists for the job and after making the final decision, the employer might be having second thoughts about the candidates shortlisted. And to clear that kind of confusion the candidate might receive a call back from the company. And that act of confusion clearance can help that employer to make a final and proper decision for the development of the company.

Once the candidates attend an interview with the company, then he / she should start looking at another company for the vacancy. And at the same time the company in which he / she already been, has announced new posts in their company. This can motivate the candidate to apply for the post in the same company. Therefore, these reasons can make that candidate attend interviews in the same company that also several times.

4. If the selected candidate refuses the offer:

And even this can be a possibility that the candidate, which the company already selected for the job, might refuse their offer at the end time. And this can make that company call all of those candidates who have already attended that interview. The company takes such decisions because of that they can save interviewing process for better purpose. Therefore, these things can work for the candidates in a better way.

5. The company changed their business:

One of the common reasons for inviting the same candidate to attend the interview in the same company which he / she already attended can be their change of the business idea. Sometimes the company might change their business ideas and there might be need of the candidates from the similar field. And that can remind them about those candidates they rejected because of their stream of work.

How Many People are Usually Interviewed for a Job:

Average Number of Interviews per Job:

The company schedules a certain type of interview for the post available. Therefore, it is quite tough to determine the number of interviews per job. The possible calculation can be estimated depending upon the candidates patience and energy. Sometimes the candidate may feel exhausted of these interviews and quit at some point of time. But some may keep trying until they get a job in their life.

The bottom line is that all these information about the interview process and some reasons that the candidate face rejection will help the candidate to overcome their mistakes and also help them prepare better next time while attending an interview. Therefore, if any person keeps failing in their job interviews then they should check out all the details given above. And even try to change their interview approach so that they get selected for a job interview.