We as working individuals, face a hectic schedule at work for most of the days. This calls for large amounts of time spent in front of the computer, stress and being tired and fatigued by the end of the day.

Hence, we have to take care and ensure that such amount of work will not affect our health.

So, a current trend in the corporate lifestyle is the introduction of standing desks. It has become a bit of a fad in the modern world.

But the real question lies in the fact that, are standing desks really beneficial for you?

Does it really provide health benefits or is it just a passing fancy?

To present a fair share, we’ll be discussing the pros and cons of traditional desks and standing desks.

Standing desks are the current new trend that has been sweeping the industry by storm across the globe.

But in reality, during ancient times, (in the1400s and in the late 18th and 19th century), standing desks were a popular item among the rich and the privileged.

Standing desks are again getting popular due to the belief that during work, it is better to stand than sit for a long duration of time. 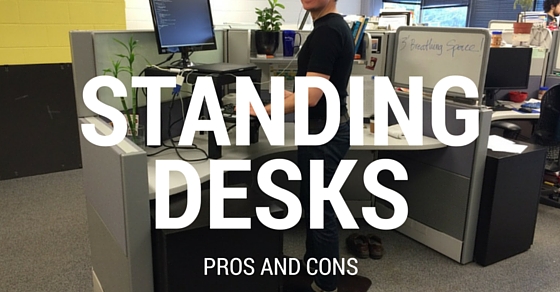 Standing keeps your bold level at a healthy level and hence helps in an active circulation and keeps the brain more alert and active.

When sitting more for a prolonged period of time, the brain gets bored and hence you tend to feel sleepy.

While standing, it’s hard for a person to get sleepy because the brain is constantly reminding the body to get the job done. Hence, the person tries to be more productive in his work.

This means that, our body burns up more calories by standing than sitting in the same position for the same period of time.

When we sit for a long period of time, our body slowly goes into an inactive state where it stops producing the necessary chemicals and enzymes required for digesting food and its associated components such as sugars and fats.

3. Better posture and no more back pain:

One of the benefits of standing desks is that they are good for correcting the posture of the employees. Sitting too much for a long period of time can be hard and can stress your muscles of our bum or our lower back muscles with too much pressure.

With the course of time, this stress can lead to aches and can form other complications such as nagging back aches, shoulder pains and stiff necks.

As a matter of fact, most of the back pains caused to our generation is the bad posture of sitting and slouching infront of the computer for long hours of time.

Standing can eliminate such symptoms as it keeps the back muscles straight and it is proven that standing can reduce aches and stress injuries such as carpal tunnel syndrome and such.

Many standing desk users find it easy to communicate with their colleagues as they can move freely or they can directly contact with them by making eye contact while doing work.

Users can talk much easier since they just have to see over the cubicle, to contact a person. But, employees do complain about the lack of privacy that they receive, since what they do inside their respective cubicles can be easily seen by others.

It has been proved that people who use standing desks have less chance of being obese when compared to people who sit and do their work.

Further research about this experiment showed that the people who were standing moved and walked around, on an average 2.25 hours a day, at least 50 calories were burned in an hour, which is very high compared to the number of calories burned by people who used sitting desks.

Moreover, metabolic changes within the body was also found, since the employees became more active.

Adults who spend more than 2 hours sitting during work have a 125% increased chance of getting a cardiovascular disease either in the form of chest pains and heart attacks.

The risk is very high when compared to workers who spend most of their time moving around.

Even for people who get limited exercise, don’t get as much reduced risk of cardiac attacks as that of standing desk users.

This can be proven by a recent study that in Britain, the bus drivers tend to develop more risk of getting a heart attack than the conductors. This shows how much standing is beneficial for health.

This has not been proven, but recent studies show that standing can reduce people getting a chance of cancer.

But it has been found that standing can cause our body to stop producing C-reactive proteins which is believed to cause many forms of cancer if found in excess within the body.

While using standing desks for the first time, forming sore feet and aching joints are completely normal. This is because your body is adapting to the new lifestyle change.

Try to move around while using standing desks instead of just standing constantly at one point. This makes sure your body gets uniform circulation throughout the body.

Different people have different lengths of time to get accustomed to using standing desks. Once accustomed, users find it easy to use such desks and they won’t develop any more sores or aches.

2. Having to wear comfortable shoes:

While standing for a long period of time, try to ditch wearing high heels. Try to wear more comfortable shoes like flats or footwear having comfortable soles.

Most users try to use gel inserts or try using standing mats.

Some might try to go barefoot while standing. At the end it comes down whatever is comfortable to the user. This can be seen as a minor drawback of using standing desks.

3. Not the best choice for laptop users:

This can be prevented by using an adjustable standing desk or using a wide screen for projecting your laptop up to your eye level.

So, the user can have the same eye level as that of the computer screen and hence do not have to hunch down or bend down while doing work.

Getting the most out of a standing desk requires proper alignment of both workspace and the body.

If not standing properly, it can do more harm than being good for your body. The best way to solve such a problem is to make the workspace highly ergonomically efficient and teach the employees how to be in proper posture.

The cost of modifying a workbench can be very high. This requires the user to fully modify the work area to make it suitable for full time standing or there is an option called a standing desk converter.

Both are extremely pricey and may hurt your pocket a lot. The best is to stand occasionally when bored of sitting.

Standing desks are not that popular since they are getting more recognition by just hype alone.

Many offices around the world still use traditional desks or sitting desks for their employees. And most of the employees do prefer sitting rather than standing all day. 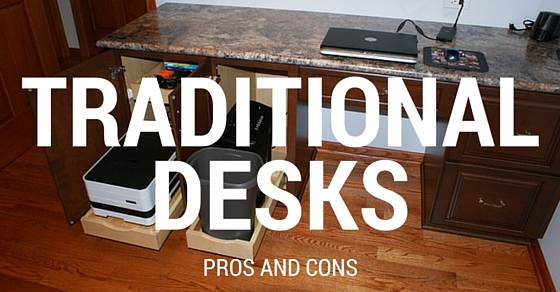 Most offices (be it at home or at the company) tend to have just a chair and a seated desk of some kind. This is really cost effective and efficient and does the job most of the times.

Standing desks require a lot of money since the user has to buy special standing desks, ergonomic keyboards and mouse, adjustable stands for laptops, a standing desk converter, balancing balls for feet, standing mats and so on.

They have also included the standing desk chair- which is somewhat confusing of what its purpose is, but people still tend to buy it just for the sake of it. All of these costs a couple thousands of dollars.

Human body is not designed for sitting for a prolonged period of time. This is applicable, especially in the case of certain individuals having health problems such as pregnant women and people having other physical and health limitations such as varicose veins, arthritis and slipping joints. Try to consult a doctor before using standing desks.

Sitting can help us recover from muscle tear or any other kinds of injury to the body.

Sitting helps the body to feel more relaxed and accelerates the healing of the muscles. Sitting in a good posture helps in this recovery a lot.

As mentioned before, long hours of continuous sitting can lead to one dire problem, it can increase the chances of being unhealthy.

Moreover, sitting in an unhealthy position can cause muscle stiffness and neck and cause diseases like spondylosis and carpals tunnel syndrome.

Sitting is also connected to obesity, heart disease and even cancer. Studies and research have shown that people who sit for a long duration of time have comparatively a shorter lifespan when compared with their peers who are more active.

Temporary discomforts such as muscle stiffness can be minimized by using ergonomic chairs and stands up to an extent, but it cannot prevent the long term diseases that are caused by long hours of sitting.

The best method one can do is getting the best of both worlds. Why not try two methods at once?

Standing Desks or Traditional Desks: Which one to Choose?

Many experts believe that doing work by both standing and sitting is the best method as it can mimic the natural movement of the human body. Try to stand up every 20 minutes while doing a work when sitting.

Try to take breaks and do stretches to relax the body and muscles and helps to increase blood circulation from within. This can help you nullify any negatives that might come. Though standing may sound beneficial for the body, too much standing can also cause troubles.

Standing desks can cause fatigue and stress which can be detrimental for your health. Most working individuals try to use sit and stand desks.

These type of desks are a cross between the standing desks and the sitting desks, as the name suggests. They are adjustable and can transition from a seated traditional desks to a mobile standing desk depending upon the user.

Another method that can be used is shifting your workplace after doing a certain work. This is commonly referred to as the workstation popcorn. In this method, consider the employee is doing his/her work.

After completion, he/she plans to move their workplace to another surrounding maybe a park or a café. Such short bursts of movement while shifting from one place to another can burn a lot of calories and function as a small refreshing walk at the same time.

The employee can shift their workplaces multiple times a day and this can provide the employee many opportunities to finish the job.