The leaders of a nation play a great role in deciding the future of the nation and are responsible for the nation’s progress. A nation can progress only through decisions of learned and educated leaders.

Many nations fail because they have leaders with less knowledge and intellect to make the right decisions for the country.

Here is a list of some impeccable leaders of the world who are highly educated and thoroughly deserve to hold the position they hold. 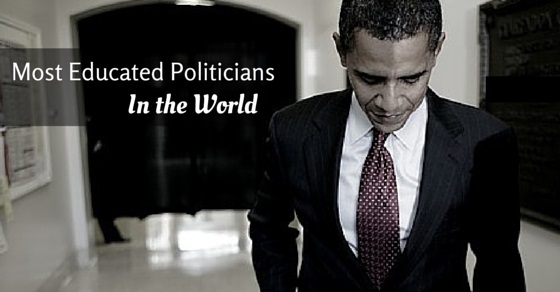 Top Educated Politicians of the World:

1. Barack Obama, the US President:

There is no introduction required to the Ex-President of the US.

Obama graduated from Columbian University. He did his law in Harvard Law School. Harvard Law Review had him as the President.

Obama also worked in the University of Chicago Law School. He taught constitutional law from 1992 to 2004. He also practiced as an attorney for civil rights.

He was the President of the most progressive nation in the world.

He was a member of the Bullingdon club while in college. He was in the 1988 batch and received a first-class honours degree.

Prior to becoming the Prime Minister, he was the Minister for Civil Service and served as a leader of the opposition.

Ma Ying-Jeou may be regarded as a scholar with a natural aptitude for law. He has done his LLB from National Taiwan University.

Ying has also achieved an LLM in 1976 from the New York University Law School. He did not stop even there. His achievements and certificates also include a Harvard Law School SJD that he received in 1981.

He has also worked at a Wall Street Law firm and as a consultant for a major bank in the US. This was prior to achieving his doctorate.

Vladimir Putin has been serving as the President of Russia since the year 2012.

He has done his law from Leningrad State University in 1975.

He joined the Communist Party of the Soviet Union while in the university and remained its member till 1991 when the party was finally dissolved. He is counted among the world’s most educated leaders.

The Prime Minister of Ethiopia has done his BSc in Civil Engineering from the AAU.

He is one of the most educated top politicians of the world and has done his MSc from Finland Tampere University in Water and Environmental Engineering.

He has also served as the Dean of Arba Minch University. Now, isn’t that a truly impressive bio-data.

Tony Abbott has been the leader of the Labour Party since past 6 years. Abbott has completed his Bachelor of Law and Bachelor of Economics from the Australian University of Sydney.

Abbott has also pursued his studies in the Queen’s College of Oxford where he completed his Masters in Economics and Politics. He has also pursued the Master of Arts in Philosophy from the same institution.

The present President of Austria Heinz Fischer was re-elected to the same position in 2010.

He is surely to be included in the list of educated politicians of the world. He had passed out of school in 1956. He has done his degrees from the University of Vienna. He has got a degree in law and political science.

He was appointed a permanent professor of political science in 1994 at the University of Innsbruck.

He was trained in Muslim religion at an early age. After studying law and science, he also pursued his interest in other subjects. He has also received a BA Degree in Judicial Law from the University of Tehran in 1972.

Rouhani promised a change to Iran under the slogan ‘Moderation and Wisdom’ and he has lived up to the expectations of the millions who elected him over his opponents.

Manmohan Singh served as the 14th Prime Minister of India. He is one of the most educated politicians in India.

He is an Indian economist whose education is pretty remarkable. The minister has gained a doctorate in economics from Oxford University.

He has worked with the United Nations between the years 1966 and 1969. Singh has held several critical economic posts in the Government of India. He was also the planning commission head in the tenure 1985-1987.

Merkel is currently a Chancellor of Germany and leader of the Christian Democratic Union party. She has been popularly tagged as ‘the de facto leader of the European Union.’

Merkel holds a doctorate as a physical chemist before entering into politics in the year 1989.

Angela Merkel has served as Federal Minister of Nuclear Safety, Nature Conservation and Environment and also as Federal Minister for Women & Youth. She also plays an important role in supervising the financial crises, at both European and global levels.

Lee Hsien Loong is currently serving as the Prime Minister of Singapore, since 2004. Lee completed his schooling at Nanyang Primary School and his secondary education at Catholic High School and then joined National Junior College.

In the year 1971, the Public Service Commission awarded Lee with a President’s Scholarship and Singapore Armed Forces Overseas Scholarship to study mathematics at Trinity College, University of Cambridge.

Lee graduated in the year 1974 in mathematics (first class) and a Diploma with distinction in Computer Science. He has later done his Masters in Public Administration at John F. Kennedy School of Government, Harvard University in the year 1980.

Why Do We Need Educated Leaders?

Education is the key in defining a nation’s future.

The backward nations are backward because the people in these nations lack education and knowledge. Lack of education can affect in many different ways.

The greatest challenges faced by the developing nations are poverty, illiteracy and lack of proper growth. The world leaders plan the policies that impact the lives of the common people.

When the laws and regulations are in place, there is no scope for corruption and cheating and the government funds get used to ensure the progress of the nation.

To have the proper legislation, a leader should have an understanding of different world problems and should be wise to create laws that help the nation.

Leaders who have knowledge in economics and finances help to create laws that ensure safe financial growth.

Understanding the political system well is another important aspect that leads to proper governance. If leaders are educated in these aspects, then they can ensure the growth of the nation.

As the different nations understand the significance of education and elect leaders who are knowledgeable and wise, they progress slowly and steadily. The progress is gradual but it is surely imminent.

The countless world leaders who are highly educated reflect the fact that the world is heading in the right direction and we can expect poverty and illiteracy to be eliminated completely someday.