Most of the time in personal and professional life, executing work or task with the help of a team or with the team can deliver some sort of positive as well as negative impression. But it is necessary for a person to understand both sides of the coin and in this case, it is about team problem solving skills.

Apparently, all the positive and negative terms or else, in other words, these advantages and disadvantages of team problem solving will help in reducing the contrast behaviour of certain task handling. 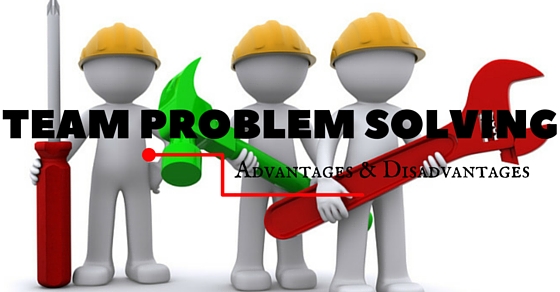 Problem-solving skill is one of the best known and important trait every employee should possess. Most of the time even a small team problem gets bigger, as no employee would be willing to take an extra step to solve it or to stand for it.

“As far as it’s not our own problem, we do not have to worry ” is the cheat code most of us have. And the main reason for developing such a tendency are our employers. Though they allow employees to think creatively and motivate to do things accordingly, but will metaphorically bite people’s heads off if anything goes wrong. This propensity makes their employees work like robots who can just act upon commands.

Now even if the above-mentioned one is considered as a part of training and coaching, whenever any group or team problem arises, managers need to install few approaches and strategies to tackle it effectively. This would allow the employee to join in a group and work on it.

How to Strengthen Your Team’s Problem Solving Skills?

When it comes to problem-solving in a team, the organization heads prefer their best people to solve that issue. And while solving those issues the board of members or a team of people work on that particular issue and conclude with the best possible solution for an issue.

During team problem-solving process, a person might think of certain solutions which can be used to solve such issue for a temporary basis. But in case of team problem-solving sessions a team or group of people will try to put in all their individual thinking in that particular matter so that they can get an answer and solution for their problem.

It might seem a bit confusing for people that when it comes to risk, more people can handle a higher amount of risk. And that is very true because when a group person tries to handle the severity of the risk, it is quite possible that they can grow better in their professional outputs.

Problems can be solved in a better way with proper communication between people. And when it comes to a team or a group of persons, then it is easy to understand that they can communicate better as compared to others.

Therefore, team problem-solving method increases communication and better understanding between a group of people and this ultimately helps to solve the issues as soon as possible.

As it is explained earlier that team problem-solving methods can increase better communication between people from the same group and apparently such behavior can lead them to build better understanding between teammates.

Therefore, such type of understanding can help all the people from the group and their problem-solving ability. Moreover, this can turn itself as one of the advantages for the sake of organization and their growth.

Most of the time while working in an organization whenever some sort of problem occurs, then the organization heads will consider their experienced employees to understand the problem and try to get the possible solution for such problems.

In this course of action, most of the people prefer their best working team to come with some best solution and that is why people and most of the companies prefer their team problem-solving abilities to look at the wide range of possible solution for a single issue.

6. Helps to increase the team’s potential:

There are some situations wherein which a person can face some uncertain situation in terms of their professional parameters, but at that point of time, that person needs to think wisely regarding the issue. And the level of thinking can increase the chances of his or her potential and ability in relation to a problem.

Similarly, when it comes to team problem solving, then it is quite clear that the level of problem-solving with the help of a team can definitely increase the chances of the team’s potential.

Most probably when a team or a group of people working on a project experiences some sort of professional problems, then it is the team’s responsibility to solve that problem as soon as possible. And eventually, the problem might possibly reach its end with the efforts of the team.

Therefore, at the end of every single issue solving process, the team presents its higher-level commitment towards the problem’s solution.

8. Reduces the possibility of bias:

When a team performs a job or a task, then the efforts that the team have indulged in that task or project would be mainly considered as a team effort than an individual person effort. And eventually, the organization will reduce their bias behaviour with certain employees of their company.

Therefore, it is definitely understandable that by involving team problem-solving technique the employee and employers of the company both can be comfortable with the working environment.

Therefore, involving in good problem-solving skills and techniques can be beneficial for both the company and its directors. And eventually, this increases the profit ratio of the company which can ultimately increase the growth of the company.

As most of the team members working in a particular team will be equally provided a chance of presenting their own creative ideas while discussing something necessary for the welfare of the company. And in that process of creative ideas, a team baring potential employees can present their problem-solving ideas for the sake of the overall growth of the company.

Therefore, as it has been explained earlier that because of the team problem-solving behaviour, the company can benefit in terms of their profit margin as compared to the other company working in the same field.

As compared to the advantages of team problem solving, the disadvantages can deliberately present the difference of opinion within the working behaviour of the team members.

Most of the time while working in a team a person’s individual efforts can be ignored because of the team. And that is because every team maintains its own team leader and every time if that team achieves some sort of excellence, then it is quite clear that the team leader will be acknowledged first.

In this process of acknowledging, the team members can be left out and that eventually brings up competition within the members of the team.

When it comes to confirmation of it regarding a certain task or project, a person needs to understand that it never helps if a person is involved in a group or is a member of a group.

Therefore, it is very much necessary for every single person that he or she should know more about these team problem-solving abilities. Moreover, team problem solving is capable of a distinguished level of conformity.

That direction will not be available with the team problem-solving ability as the team leader leads all the decisions in the process.

People think that if a single group have a maximum number of members, then time constraints will be eliminated.

It is not necessary that if a team or a group of a certain number of people are part of the group, then they need to participate in all types of work or task. Most of the time it happens such as a team member might be interested in being a part of something interesting, but the team doesn’t let him or her participate in such an event.

Similarly, this type of behaviour creates unequal participation within the group and which eventually grow into something big in terms of drift and loss.

Most of the while being a part of a team or a group some member might not feel interested to participate in all sorts of events or task assigned to that particular group, but the actual truth is that such type of behaviour can bring up some sort of communal issue within the group.

Therefore, unwillingness to participate can be considered as a decision of a person who is a part of the group, but because of that individual decision, the whole team benefits some great loss.

Working in a team or a group takes a lot of team spirit, but some people totally lack behind in such type of criteria and because of that the team or a group damages its reputation.

And that is why a group must contain those members who are more than interested in the team working behaviour and its environment. Therefore, while choosing a member of a team, a team leader must consider the level of comfortability in the participant about being a team player.

It is a very common component in team problem solving and that is because a person might not experience any type of trouble or problem with the desirable situation. And these desirable situations, eliminate a process of problem-solving on its own without any extra efforts.

Therefore, while considering this undesirable situation component, a person needs to understand all things about undesirable objectives.

Most of the time it is a contrasting behaviour that people might experience threatened with the desired situation and that is common for everyone. Because most of the time in a common daily life people face all sorts of people and all those people might not experience the same desired situation as one, and that is why it gets a little weird with the team problem-solving.

Therefore, it is very necessary to understand the desired situation as well in the team problem-solving ways.

3. The difference between the desired and undesired situation:

That is because of the team playing availabilities. Most probably while being a part of a team a person or a member need to understand a thin line between desired and undesired situation.

Finally, the bottom line is that here we have provided all the advantages and disadvantages of team problem solving along with its own components which brings up all the necessary study materials regarding team problem-solving activity. Therefore, if anyone is interested to understand more about team problem solving, then they can refer all the above-mentioned points to continue their study in the same field of work.