What are Dual Career Couples?

Nowadays dual career couples have become very normal. People often choose a life partner on the basis of education and job. Thus having a job for both the gender has become an obsession as well as a priority.

But this feature has its own advantages as well as disadvantages like two sides of a coin. Let us discuss more about this dual working couples system. 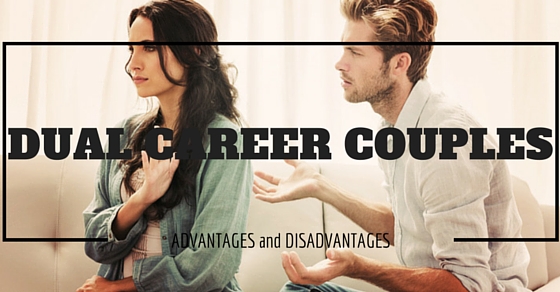 There are lots of advantages of having dual career couples. Let us discuss some of them.

According to a study conducted, it was stated that a dual career couple have better balance in their relationship, understanding and more advanced in solving problems for each other, than any normal couple.

Since both of them work, a better opportunity is created in which both of them are able to   regarding their work, thus decreasing each other’s stress level by few percent. Since in dual mode, both the partners are working, a sense of equality is developed which leads to an excellent communication of various issues arising due to their work.

Helping each other with their projects becomes much easier since both are now in the position to understand each other’s problems to achieve work-life balance.

Since in dual career couple both the couples are working, the financial crisis is decreased. Moreover, these dual career couples get a better advantage of providing their offspring with better future, education and lifestyle than those couples who have only one partner earning.

While getting more focused on their work, these couples are more likely to get awarded for their commitment. With both the couples working, financial worries are reduced drastically.

Gone are those days when women are only meant to stay at home and look after the house. Nowadays everyone wants a spouse with high educational background and a stable income to act as an extra support system for the family.

Now that both the couples are working, management of house becomes a duty of both the couple, not only for the female counterpart. Therefore working together in harmony gives rise to better understanding of each other’s problems as well as increase some rare abilities such as patience, and decrease some useless habits like laziness or ordering each other around.

Additionally, they get a better view of each other’s individual lifestyle and tend to solve problems with increasing efficiency.

The biggest benefit of being a dual career couple is that you get to share a common goal which changes their individual lifestyles.

Not only have they got to enjoy an individual lifestyle, but also having a common aim, work harmoniously together to reach the goal effectively. Also a greater sense of accomplishment is achieved for both of them.

Having a dual career path implies giving less time to the children. Thus this can be a negative aspect. But the positive thing is slowly children learns to be less dependable on their parents and tend to go for finding out solutions for their problems by their own rather than sticking to their elders for advise all the time.

So children learn to become self sufficient, self reliable and less dependent on parents for their daily decisions. This increases their efficiency and gives them a lesson to handle world on their own.

In dual career mode, you get exposed to varieties of opportunities in the market for further enhancement of lifestyle. Since nobody is dependent, diverse opportunities open for each of them to work out.

Opportunities give rise to challenges which removes boredom and lethargy, enhancing better exercising of body and mind for both of them to work better and efficiently, accomplishing their daily goals and get better benefits out of their opportunities.

Dual career couples is the new trend of 21st century. With increased number of women getting an opportunity to learn and pursue their career, the dual career couples problems or two-body problem has seen a rise.

Both the couples are serious about their career, highly educated and are together running a dual career family. Though this scenario may give family income independence, but it comes packed with its own set of challenges.

Many dual career couples pursue their career while simultaneously running their family. In such couples each spouse’s career is equally important and there is no question of any superiority.

Due to such high level of commitment from both the spouses it sometime becomes difficult for them to maintain a healthy personal life unlike traditional families where each member enjoys their freedom and duties alike. Thus increasing stress level in their personal lives.

It’s a classic professional versus personal life situation in which both the spouse have to choose between personal advancement and the welfare of the family.

The very definition of the term states that dual career couples are serious about their career, so the conflict is not about whether career or family but it is more like who will be sacrificing what and to what extent in order to run the family.

Spouses having different education, working skills and career advancement have very fewer problems as they have less difficulty in getting job at the same place or same organization.

So probability of landing a job that would require both of them together becomes a hectic process.

The worst thing that hurts a person is when his or her better half doesn’t stand up to his or her expectation. This usually happens when a person assumes certain responsibilities to be carried out by the other by default.

This makes it even worse, they don’t come upon to agree on a common point which creates a situation of stress and uncertainty regarding the future of the spouses. Thus increase in expectations brings about worsening of personal relation.

This creates an unwanted tension to man to earn more while for woman to perform her household duties. This type of stereotyping affects a lot to the relationship in which both are pretty serious about their career and role in society. Thus living in a stereotypic society becomes a mammoth task.

6. Compromise in the growth of career:

Due to shared load, responsibilities and will to pursue individual’s career becomes difficult for both of them to achieve the best in their career. Often one has to sacrifice a bit in handling the domestic affair so that the other partner can concentrate on more important work of career advancement.

But if no settlement is reached regarding the share of duties then it causes a strain to develop in between two partners. Thus, creating a discord among each other.

With present scenario where most of the employees are male, it is very depressing situation for women as in most of the cases where both the partners having same experience and qualification are applying for similar jobs, the male counterpart gets to land a job while the female counterpart is given a job of less importance. This type of situation is known as trailing spouse.

Though, with efforts the female counterpart gets to acquire her desired position in the organization but it usually hurts the pace of her achievement rate and somewhat delays her progress in career.

In order to overcome the problem of compromise in the career growth, many prefer a lifestyle widely known as dual career commute couples. This gives couple the liberty to choose their own career path but at the cost of living apart. Each one of them is satisfied about their work life but it puts the two into long-distance relationship. There also exist a lot of other problems.

As the partners lives in different far places it makes it obvious that the partner after some initial days start to feel the lack of togetherness since to get to see each less and less with every passing day. This reduced the productivity of both to a great deal and also they start feeling deprived from physical closeness.

It’s a problem that is associated with every long distance relationship. Adding to that the individual’s commitment and heavy involvement in advancing their career, it becomes difficult for both of them to share and talk on a daily basis. This adds up to the tension that exists between the partners.

If it is a family having children, then the tension escalates to a higher altitude as it makes it difficult for both the parents to provide proper nurturing environment to their children. Also, an improper division of household affairs only make it worse for both of them to maintain the long distance relationship along with managing their children. Thus many unseen problems arise due this fact.

For younger husband and wife:

These are the couples who have just recently settled and are learning about each other. For wife, she usually remains clouded with the thinking that her husband is lacking somewhere whereas the husband consider this situation as battle plain to know whose work is more important.

For older husband and wife:

Dual career couples are the couples who have already settled for a long number of years and have a kid or two. For wife, the main concern is her less involvement with her children while for the husband it is the lack of providing security to his family.

Now we know the PROS and the CONS of dual career couple. It can be hardly ignored that the present situation makes it even more favorable for dual career spouse to rise up in every part of the world. So let us focus on some of the best tips to follow regarding

Ways to Ensure the sustainability of families:

Communication is the key to solve any kind of problem in a relationship. If the partners decide to communicate with each other on a regular basis and ensure that both of them get to receive physical and emotional needs then it is very possible that the partners will continue to live a happy working and presonal life.

The biggest problem arises due to unclear and hasty division of household work between the partners. To ensure that both the partners get to do their equal share of work they must sit and discuss about it.

This will not only ease the tension but will also make sure that no partner gets over strained to do some faulty assumptions. Thus having a clear properly made decision is very vital.

Despite many challenges that dual career couples have faced and will be facing, the present economic scenario is demanding more and more such couples to pop up around the world.

Many organizations are now changing their policies in order to accommodate both the partners in the company thus ensuring the best productivity of the employees. Also, with increased awareness and proper planning of this, it can be ensured that such couples can live a happy and a prosperous life.