It is true that almost all recruiters include a common question which is a failure question in the interview. ‘Tell me about a Time you Failed’ or ‘Tell Me a Time When You Failed’ seems to be a tricky question but one need to impress the recruiter by talking something the candidate has failed for in the past. This can be considered as a negative question and surely is difficult to answer such a question.

Being a behavioral interview question it requires more concentration and research to get through it. It is mandatory to answer this question and one cannot fail to answer the question.

The main intention of this question is to monitor the capability of the candidate to be self-detective, takes risks, learn from a setback and recognize mistakes. When the question  “tell me about a time you failed” pops in, make sure to answer with the following tips mentioned. 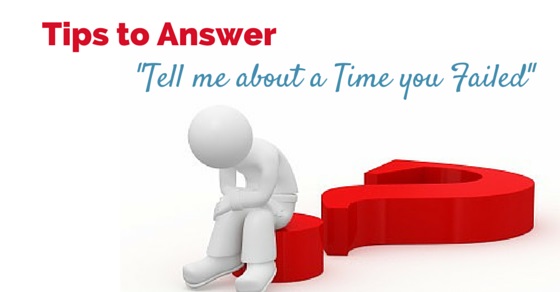 Answers for “Tell Me a Time When You Failed” – Interview Question:

In an interview, candidates must answer the questions very carefully as the hiring managers will be smart enough in assessing the candidates well. They are well versed in finding the difference between genuine answers and parrot fashioned answers.

So even if you are rehearsing the answers for the interview questions, your tone in the interview while answering should be regulated accordingly.

Interviewers usually have few tricky questions up their sleeve and ask candidates to analyze their behavioral traits. “Tell Me a Time When You Failed” is one such interview question that helps them analyze the candidate.

Though the sudden shooting of such questions can rise the nervous level of the candidate, proper preparation can help them calm their mind and answer in a confident answer.

Reasons why employers ask this question:

Here are 3 main reasons why employers usually ask this question to the candidate attending the interview.

Bonus tip: You need to be humble while answering. This creates a good impact on the interviewer.

Best tips to answer “Tell me a time when you failed” question:

Here are few best tips that you need to consider when answering this interview question so that you can impress your interviewer effectively.

Tips to answer the question Tell me about a Time you Failed:

1. Real-time failure to be chosen:

To answer this tricky question, make sure to talk about some real-time failure that happened long ago in your work. Make it perfect by mentioning that something which is important has gone wrong and not the whole thing. Make it appropriate by mentioning that the work went wrong due to personal actions.

To make the answer work out mention that something in the work has gone wrong and not everything in that manner they are looking out for people who has made everything wrong. So make just one thing to go wrong and your answer will be perfect.

A real failure story is chosen and the failure is evaluated. Make sure you initiate the stage for failure for a long time and get to the direct punch quickly. In that scenario, recruiters are just looking out to see how setbacks are handled by the candidate. For the same reason, the story is to be quickly forwarded to the failure stage.

Explain the reason for the challenge of the story and also explain your action for rectifying it. Being a failure story, there is no chance for success to partake in. Make sure to open up failure and explain that the plan failed. Make your answer in a way the recruiter believes it.

Once the candidate has explained the complete story, he can conclude it and make the outcome more impressing. He just needs to mention certain things for the failure and steps to keep going forward. Share your experiences about failure in a free manner to the employer.

When such a question is shot make sure to provide a direct answer instead of hiding or concealing that you have rarely made any mistakes. Misjudgments and mistakes are a part of human life in the workplace too and no human is perfect all the time. So it is advised to be genuine and straightforward with the answers along with a silver lining.

To make your failure story believable it is mandatory to explain the specification of the story such as where, what happened, why, what failed and more in a more substantial manner. By this way the recruiters would conclude that the candidate can take up smart moves and is also aware of the various challenges. You can open up that you can face any setback which adds value to your trait.

It would be good to avert disastrous oversight in order to capture the attention of the recruiter, being concise and specific can be the right aspect. Practicing the answers well ahead can be right so that quick and clear answers flow in the interview. The recording feature available in phones can be used so that the content evaluation can be done and also the length of the response can be noted.

Make sure and keep in mind to answer and present the right information. The failure example you mention should be beneficial and add value to the career. It would be beneficial if one can avert failures that have not brought in any lesson or value. Do not talk about failure that hit the hot button.

The main intention to assess a failure question like this is to check the candidate and know if they have the capability to face mistakes, move forward and learn from them new lessons. This is also a chance to show how you are able to turn failures into success.

By asking such questions, the recruiter is trying to test the honesty of the candidate as well as the ethical standards. It would be good if the candidate explains the situation and the way it was dealt. The way the problem was handled is important to be explained which shows your way of approaching an issue though it ended up in failure with few factors.

When a candidate faces a failure, there are many forms of failure where some would be big and some failures are small. Omitting a problem, not taking any action, refraining from facing the problem can be few aspects which can kill your career, hence show the recruiter that you learned something from the failure. Also make sure to conclude by talking about the lesson that the failure taught you.

There is nothing to get spooked with this tough question and candidate need not indulge in shame in order to talk about his previous failure. From the recruiter’s point of view, it is a favorable factor for the candidate in his career to recognize failure and learn from it. When a candidate is able to put on right attitudes towards the question, then it would surely fetch him the job desired.

By answering these questions with the right tone and attitude maturity, self-awareness and the capacity to grow can be seen. And hence an appropriate answer for the question is important.

By explaining the failure, the candidate would have learned from the mistake. Here the candidate needs to speak in an optimistic manner and demonstrate that he has learned a positive lesson from the failure. The candidate should also mention that he is keen and has never made the made mistake in the future, by this way the employer is impressed and chances of getting the job is more.

When you are explaining your failure, make sure to present it specifically along with the actions you took for handling the problem. You may have learned something from it, also explain the employers about handling the same kind of issue if it pops up today. This will show your capability and confidence to battle any problem regarding work.

When you’re trying to explain your failures to your employer, make sure to choose failures based on behavior instead of ones from inborn characteristics. As the former ones are ones which can be easily changed than the latter. It is vital for the candidate to show that you learned a positive lesson and also learned a constructive lesson rather than seeing the failures as disasters.

Present your explanation in a way that failure is just a temporary event and not a permanent one. Make confident answers that since you have learned lessons from it, there are no chances for it to happen again.

Lynn Taylor who is a national workplace expert explains that it is very common interview question and hence holding a couple of examples within the memory and focusing on the lesson learned is mandatory.

The main aspect in answering failure is that the candidate needs to pick the right failure, second is that the person needs to bring out what has been learned from the lesson and finally formulate a story where it has a happy conclusion.

“Tell Me About a Time You Failed” Sample Answer:

“In my past organization, I was leading a project for one of our biggest clients and was excited to please them, so I offered them we could complete the project within 3weeks. I thought the time was achievable, however, we took, a month to complete and they were not happy and were frustrated. Recall Today, I understand, we should have been more careful in the estimation for the client. I knew that a customer won’t be disappointed in case you’re clear about the time in advance, yet they get frustrated on the off chance if you couldn’t complete as per the deadline discussed. So after this event, I figured out how to turn out to be better at dealing with the expectations for clients during projects I oversee. For instance, on the following undertaking with another customer, I guaranteed them it would take a month, and we finished in 3 weeks. The customer was very happy with our work and efficiency.”

Answering “Tell Me About a Time You Failed” – Quick Instructions:

There are many sample answers which can be read through from the web, which explains the way to answer the question “tell me about a time you failed?”. The candidates should make sure to open up an optimistic view, confidence; lesson learned from the failure and also averts the problem from happening again.

It is a fact that ones who aren’t afraid of making a mistake are people who enhance and improve themselves along with their performance. These are the kind of candidates impressed by the employer.

Job Seekers and ones moving over to the next level on the interview can run through the above-mentioned tips and formulate failure answers accordingly. These are a few important points that need to be focused on regarding failure. Focus on the question as an important one rather than taking it lightly as it decides the future for any candidate in an interview.