Measuring happiness is quite a tricky chore, but happiness is what all we want and when we possess it, we need more. It is a fact that happiness is linked with health. And hence striving for both is mandatory. 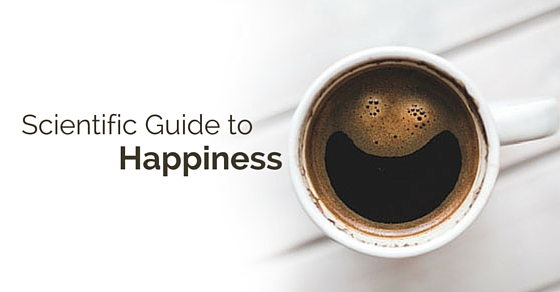 The 1 Step Guide to Happiness:

In order to decrease depression and enhance happiness, there are few adjustments and strategies that need to be worked out. The book called “upward spiral: using neuroscience to reverse the course of depression, one small change at a time” opens up few changes that can be followed in any individual’s life. It is a true fact that almost all of us avoid advice and think it has very less value.

It is said that worry and anxiety is diminished by hearing more of repeated advice which helps in setting goals and taking decisions in life.

The PFC or pre-frontal cortex must be taken to the gym to pump in some oxygen. You need to practice your brain with few techniques to handle emotional discomfort, by regaining control and remaining calm. The PFC is strengthened by practicing yoga, walking or meditation. The same idea is discussed in detail in the book “Buddha’s brain: the practical neuroscience of happiness, love and wisdom”.

4. Look at everything in a positive aspect:

Hanson says that right thing slides out easily from the brain whereas negative ones stick back and cause severe imbalance. Hence Hanson mentions to follow three steps at times of good or positive aspects that happen.

The first way is bringing positive experiences from positive events. Avoid dismissing them but make a note of them. The second step is to get into deeper view of the experience and look into the details. The last is to try to make positive move in all aspects.

The hormone has a number of functions, they serve to strengthen the bond, and you would desire to gain in more contact and socialization so that the hormone keeps flowing. By this way you feel happier.

Scientists from Australia, Germany and Netherlands published a paper by the proceedings of the national academy of science, where it opens up that the choices of life can cause changes in level of happiness. Some of their beneficial findings are listed below.

Scientists found out that there are few basic aspects which decide an individual’s happiness. Some of the basic aspects are exercising daily, taking part in charity work, getting along with friends, choosing a perfect life partner who is not crazy, and more. Scientists suggest that neurotic individuals require neurotic partners.

Scientists found that women were more keen and showed importance in choosing their partners. It was found that women whose partners were interested and invested in family life were happier than ones who did not bother or support the family.

The authors also concluded that without living together, the real attitude of the partners can only be assumed and not accurate. The scientists also had a test that can be conducted with the partners called the NEO-AC which is a test that measures five traits to know whether it’s normal or nonpsychotic. The scientists suggest this as a good advice which can help individuals avoid marrying psychos.

There were paper findings published by German scientist after research studies and 30 years of interviews. They decided that their paper findings should open up an exclusive period for research about happiness.

The authors mentioned that choices are one main aspect that affects happiness and in the same manner, happiness is also affected by choices. A clear example scientist suggests is that when an individual is inclined to depression then he is also inclined towards happiness.

10. Scientists view of happiness and productivity:

Happiness has a number of benefits and in that manner; scientists come up saying that happiness is related to productivity. Scientists have mentioned that individuals who have skip their usual step are said to possess better jobs than others.

These people are also tagged positive by their bosses and also produce more money. The other information is that these individuals have a better immune system, are happy and satisfied with their marriages, and are charitable.

With all the findings about happiness linked with productivity, there were few questions that were put forward. Was happiness the reason for all terrific things to happen? Or is it the other way round?

Psychology professor from university of California Sonja Lyubomirsky took these questions into consideration and set up a research team which conducted nearly 250 studies for about 25 years.

They came to a conclusion and determined that being happy brings you great things in life. In the same manner the rate of happiness to reap the rewards was another aspect to be cleared. Another professor of psychology Tal Ben-Shahar mentions that happiness is subjective; he also mentions that the happiness and joy for one person may not be the same for another individual.

The new formula for happiness according to experts is to increase the level of happiness in spite of the emotional spectrum that prevails. This is a new discovery as individuals have a set point for happiness and they need to alter it. David Lykken from University of Minnesota mentioned that the ideas can be fruitless as trying to be happier can be something like trying to be taller.

The idea of increasing happiness has highly been disapproved by scientists. Another study was conducted by the national academy of sciences where 60,000 adults were studied and concluded that genes were responsible for an individual’s happiness and well-being. Bruce Headey who is a professor of the Melbourne Institute of applied economic and social research found that there is more impact on business, based on life goals and choices.

Lyubomirsky mentioned that, genes aren’t completely responsible for 50% of happiness. She concluded that 10% depends on the circumstances of life and 40% depends on the individual to shape them.

Professor of psychology of Harvard University, Daniel Gilbert and also author for book called Stumbling on happiness says that none of us know what makes us happy. This is because of something called hedonic adaptation. The term hedonic adaptation according to scientists is that an individual would rush and take up or adapt something that makes them happy, but after some time, when they are used to it, they take it for granted as it does not provide them the initial happiness.

15. Examples for hedonic adaptation by scientist:

Happiness is also measured by hedonic adaptation which is explained with examples. Professor of psychology in Pennsylvania and author of book ‘practical wisdom’ mentions that, During a hot and humid day when an individual gets into an air conditioned room the individual feels happy, but after sometime, the pleasure and happiness is no longer prevalent.

Another example would be in terms of money. Professor of psychology of Holland in hope college Michigan mentions that there is an association between money and happiness.

People think that the more money they have they feel happy. The same formula holds for ones who was in their dream job, A study was conducted on mangers where after five years they were voluntarily changed with their jobs and they were found to be satisfied and happy after changing. These are a few clear examples of hedonic adaptation.

These are a few tips and hints which is scientific guide to happiness. Being stressed and anxious is present in all human beings and can be occurred for a number of reasons. But the truth is that stress is detrimental to health and actually kills us. It is hence good to be happy always. Stress and sadness cannot be completely eliminated in any individual’s life but these hints can be followed so that they become less influential in any one’s life.