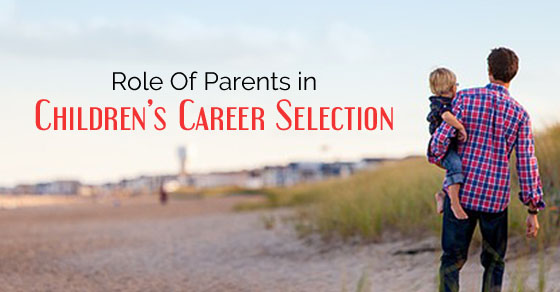 Parents give birth to children and they wish the best for them both in terms of career and the happiness. Parents are the first teachers for the children.The role of parents play an important role in building as well as diminishing their childrens careers.

By giving children the wings to choose what they wish to do for their career, they become a reason for success and when they force children to pursue what they themselves wished for them, the children eventually fails to accomplish. So, by number of ways parents play an important role:

Role of Parents in Choosing a Career:

The following mentioned are few pointers on the parental influence on their childrens career choices.

All parents wish best for their children, so to make their wish fulfil, the parents motivate the children and help them make good choice of career. They motivate them to never give up and work hard until they have achieved the desired path of success and fulfillment.

2. Helps in the decision making process:

Children often make wrong career choice or bad decisions, so at that time the role of a parent is to guide them right and assist them in making choices which otherwise seem difficult to finalize. May be the child gets confused over choosing which stream to take, whether to go for medical or commerce, like this; in such case parents are the guiding force who follows children like a shadow so that they never go wrong on making poor choices.

3. They are the facilitators:

Sometimes parents become influencers, but now the time has changed; parents are becoming a support in what the children are doing in their future. Mindsets of people are changing to greater extent; where earlier parents were only known to career choice confined to teaching, doctor, law, etc; now they have in front, number of other options like journalism, mass communication, fashion, textiles etc; they are able to facilitate children with endless career selection options.

4. Encouragement is another role:

Parents encourage the children to give their best through confidence and hard work. Not just this, they are also encouraging them to step out of the houses and explore a lot; which in earlier times was not allowed and not in vogue, but now this is not the case, now every second child from home is out for higher studies; so not just the mindsets are changed, but also the time has got revolutionized. All this is due to the change in need and demands of society.

5. They act as a lighthouse:

Just as the planes are guided by the lighthouse whenever they miss their way, in the similar manner the parents act as a lighthouse and guide the children to choose the correct path. Whenever you see yourself going astray, the parents come in front helping us till the end until the children have achieved the correct career track. This way the children are less prone to the difficulties and also the success hugs warmly over the period of time.

When you have the support of someone who is never going to leave you alone, you are able to move ahead, thinking you have an undettered support behind your back. Even when you will fall, you will seek the support and assistance of the parents.

7. Picks the children up everytime they had a fall:

Rise and fall are the part of life and everyone taking a first step towards career ought to fall due to lack of skill, experience.

Should Parents Choose their Children’s Career?

Although parents are the ones who know their wards the best than any other person, yet they should not influence them to choose a career for their future, due to following reasons:

1. Career is important that impacts ones entire future:

Only once in a lifetime a person gets an opportunity to decide the career and if he or she fails to move on the right track; the whole future dwindles down. Many times it happens, the children choose the career of their parents choice and in the mid term they leave the course as the stream fails to impress the child. So, let the children make their own career choice and not by parents or family infuence.

2. Lots of money and time goes into vain:

When the wrong career choices are made, the money and time both go wasted. So, it is better to give space to children to allow them make choice of their own career decisions rather than getting influenced and then making a choice. If a child is sure and determined about specified stream and career, let him or her go for it; do not stop or it will ruin one’s future.

3. Ultimately, children have to work and not parents:

Finally, the children have to do all the practical work and not the parents; so parents should understand that the due to their wishes, the child may fail to give his or her best, leading to the bad and terrifying future. After all, there is a lot of difference in saying and doing.

4. The career may not interest the child:

The child may follow you out of emotions, but what if he or she is not able to fulfil it due to lack of interest? Then you might blame yourself for forcing the child, so it is better to let children make their independent choices, after all they are no longer the kids, but adolescents.

5. Every child is different and unique:

Not everyone is the same. Every child is different in one or the other manner; some have good writing skills while others possess great communication skills and strong intellect for mathematics. So, parents should show them what they are good at rather than impose their own decisions on children. This way the stressful atmosphere will be reduced and the career will move in a flow.

6. Work done under pressure has been never successful:

When you do work under pressure, you ought to fail as the eyes, mind and the heart is never focussed in doing the assigned task. The forced mind is like a slave and the slavery never yields in the desired potential output. Also, there lacks efficiency and that task is never appreciated by anyone in the field.

When children go as per parents expectation, they usually end up with zero efficiency in work and many other symptoms which harm both the working environment of the organization as well as the capacity of individuals to work effectively. Other effects are as follows:

When children jump into the field all due to the pressure of the parents, they end up doing nothing in the field due to lack of interest in that particular field.

2. Success is not achieved:

If a person does not work with his or her will, he or she fails to achieve success because success is achieved with sheer hard work and it is done only with the heart full of dedication and concentration. When the heart is out at the work place, you are not likely to reach to the level you have desired to reach to get name and fame.

3. Lack of interest in the work:

When parents force to go for particular work, but the child shows no interest and has to do the work under the influence; the work is never accomplished as desired all due to the lack of interest towards the task.

When the work is done with lack of interest and no concentration, one feels unnecessary pressure of the work even if there is no external pressure. When the mind works in pressurized situation, the quality of work tends to reduce and there is no balanced and systematic work.

With lack of interest, hard work, dedication, efficiency, and unnecessary pressure one is not able to deliver the work on time. The work gets delayed and the deadline for the work passes, making it useless to complete or submit after the deadline is crossed.

Even if the work is accomplished, there are number of silly errors which might not be found in the work done with utter diligence. You are ought to do silly mistakes when the heart is not at the place where it should be while working.

The good image you have build sinks to the deep lower level when the output is not as desired by the company. Every company wishes to have employees who give them the best output with no mistakes, thus taking a company to a next successful level.

When the work is not up to the mark, then why would companies want to keep you for a long time; so due to all such factors, there is a lack of future security. The dark future haunts the person and leads to the bleak future.

When you fail to deliver good work, you are not given an immediate promotion. Others with greater work efficiency may get promoted on faster pace, but you will fail if the work does not interest your genre.

10. No enhancement of skills:

The skills are enhanced with practice and when the practice is done with the repeated silly mistakes, the skill enhancement is not visualized. When skills are not enhanced there are no chances of moving ahead on the success ladder.

Parents are the driving force:

Yes to some extent parents do influence their children’s career decisions. The parents are the driving force and they highly influence the career choices.

Many children choose practical high earning occupations due to family and society influence as opposed to arts, music and drama, to which the society looks with fishy eyes.

Children choose what they are not meant for:

Just due to what relatives will say, children choose what actually they are not meant for or they do not have an interest in doing. That so called societal fake pressure leads to making of wrong career choices.

Not just this, the peer pressure is also one of the major reasons behind the crucial decision of choosing the career. The peer friends, the same age cousins also force to pursue exactly what they have pursued. The children when are compared to the other children, the wrong influential factor takes toll on the future of children.

Parents, society and also the relatives should motivate children in pursuing what they are better in rather than imposing their own wishes and dreams. Parents wish for a child to be an IAS officer, but the child wants to go for interior designing, then why not let the child do what interest him or her the most.

The influence of parents can be positive as well as negative in choosing the career of the children. It becomes positive when they allow children to follow their dreams. Children work well when they are determined about something but fail to give the best result when they are forced to do something.

So, above are some of the points which clearly demonstrates the role of parents in the choice of career making for the children. Also, what are the positive and the negative aspects of influencing the children to make career in what they are not made for.

The role of parents is crucial in the lives of children and they should act as a guiding force not the influential force. They should understand the needs, desires of the children instead of pressurizing them.

By pressurizing the children becomes slaves to the ideas of others, they are not able to give their productive views, which hampers their growth and skills.