It is never a bad idea to start planning your retirement. No matter how old you are, you should always think about what you will be doing when you grow old. And in case you have been checking out different locations, then the Bora Bora would be the perfect destination for you. Filled with waters, this island is beyond beautiful.

Plus in terms of economy, this place is absolutely perfect. If you want to know how you should retire in Bora Bora and what you should consider before saying yes, read this article. 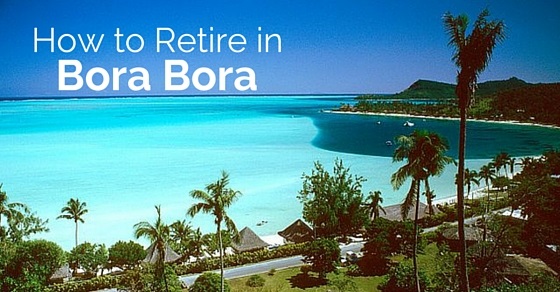 Things to Do Before Retirement:

It doesn’t matter how fit you are, if you are retiring and especially if it is remote islands like Bora Bora, you have to consider health care as an option. It happens to be a great concern for those who are old and must be given first priority.

There are several states that have provisions for healthcare and they make sure your health is good. If you have been a citizen of the EU and have enough access to health care and other countries like the EU citizens, then make sure to take advantage of that. There are several health care policies available for you.

Think of the personal pension:

If you make a plan of paying into your personal pension, then the tax men will make sure that you get a part of the billion dollars that were given to you as savers of the pension.

You can give a thousand pounds to the pension account and the tax men will keep adding another 250 pounds to it which will make your income rise fast, don’t you think? Or in case you end up paying the taxes which are higher, you could also end up getting some more cash. There is a little more good news. You may also get back some extra money

You should begin your pension as early as you can:

Several people in America, as well as Great Britain, do not have much pension and it is quite possible that you do fall in this same category. The truth is, if you want to keep enjoying your retirement, you have to do it in Bora Bora or the Blackpool which is important. Moreover planning for your retirement is very much important

To know how much you have been saving all this while, there are experts who have suggested that you have to divide the age when you begin to save up the money and then you may use the figure as a percentage that will determine how much you should save.

So when you are 28, you can save at least 14% of the amount you have earned. When you are 55, you will, however, need a little more than that.

Pay all your taxes:

Before you retire, it is very important to get all your taxes paid. Just because you are moving abroad, it does not mean that you are free from all the troubles. Make sure all your income taxes have been paid before you settle in Bora Bora.

There are two things you should know about Bora Bora before choosing the destination. One is the economy and the second is culture.

The economy of Bora Bora is obviously dependent on tourism. It takes over around one-fourth of the Gross Domestic Product. However, there are a few other sources of income here as well.

Some of them also include pearl farming as well as commercial fishing that is usually done deep into the sea. The small sector that is manufacturing basically processes all agricultural products.

The culture of Bora Bora also includes its history and you must also have a good idea about it before saying yes. The missionaries visited this place back in the 18th century after which they got rid of all the traditional culture and tore down all temples and destroyed all ancient cravings. They also banned tattoos and the dancing of exotic island that was a surprise to all the Europeans.

However, there has been a recent change where people have learnt enough about art, music and dance. They have taught themselves about drums and play other musical instruments. Guitars are also popular among them. Most are Christians as they were forced by the sword you will see a few Christian ideas but some traditional ideas have also persisted.

Before we bring the post to an end, here are some things that you need to know about Bora Bora that might help you while staying. Read this section carefully!

Bora Bora might be a paradise to look at, but if we come to the climate then this place is hot as hell. The tropical island will leave you tanned like anything. Plus the locations are so difficult that you will actually have to choose between sitting in an air-conditioned room or enjoying an awesome view.

The food is not very good:

The food in Bora Bora is not all that great. If you want fresh fruits with some sushi, then its okay. But if you want seafood, then this place will really make you hunt for the good places.

Plus some of them are so expensive that you won’t want to dine with them after a point. You will want to eat at home instead. So if you are willing to make that kind of sacrifice and cook at home instead, then Bora Bora is the place for you!

If you have visited Bora Bora before and have loved the country, then don’t think twice before saying yes to this beautiful place. Plus you have learnt enough about the ideas, cultures and traditions that exist here so you won’t have a problem while trying to adjust. And we have enlisted the tips on how you should retire so that gives you very little room to complain. On that note, good luck and have fun in Bora Bora!