Life has always been very unusual and completely unexpected for me most of the times. So that is the reason I am always ready for any situation. But one thing I have always learnt from my experiences is that never ever give up. 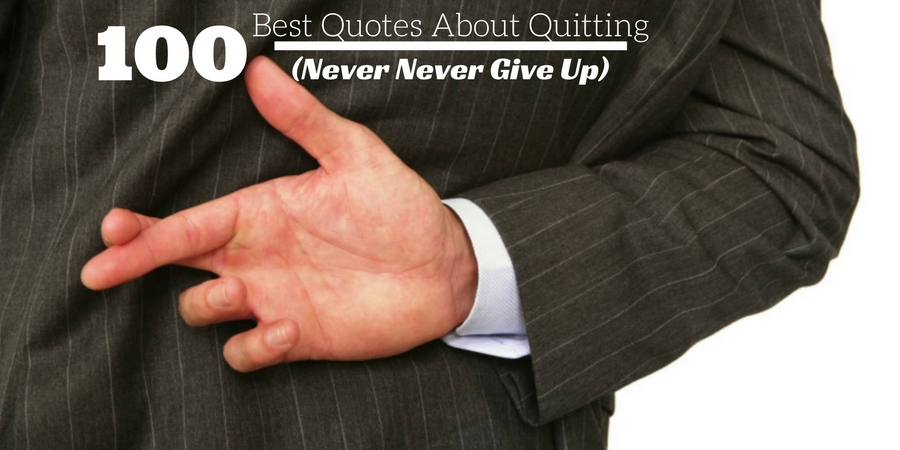 Not always life gives us second chance, so why wait for it when you can do it in the first shot. Most of the people always fail when they reach nearby to their goal and decide to quit. No one knows what life has planned for you so quitting would be one of the worst decisions you would ever make.

Here are few exceptional quotes for boosting your confidence that help you to never quit and help you to achieve your dreams successfully.

Here we have listed out some famous quitting quotes,

Start with one of my favorite quote which is,

6. “The surest way to hurt yourself is to give up on love, just because it didn’t
work out the first time.” ― Amanda Howells

7. I’m not a quitter. All my career, I went through a lot of physical adversity, injuries. It’s in my nature to be a battler. – Harmon Killebrew

8. “If you quit ONCE it becomes a habit.Never quit!!!” ― Michael Jordan

9. Let’s get one thing straight – there is a big difference between a quitter and someone who gives up. Unfortunately, I have the right to make this claim because I fit into the category of ‘quitter.’ – Jenna Morasca

10. “I shed a tear when I meet somebody who always quits. Reliable people are so rare in this world.” ― Bauvard

11. “Most people who succeed in the face of seemingly impossible conditions are people who simply don’t know how to quit.” – Robert Schuller

12. I’m learning quickly, once you quit one thing, it gets easier and easier just to leave situations rather than deal with shit.” ― Doug Cooper

13. “Success seems to be connected with action. Successful people keep moving. They make mistakes, but they don’t quit.” – Conrad Hilton

15. “Things can always get worse, but only quitters quit!” ― Nina Sakura

16. “No man is ever whipped until he quits in his own mind.” – Napoleon Hill

17. “When quitting is done correctly, it isn’t giving up – it’s making room for something better.” ― Adam Kirk Smith

18. “Some people fold after making one timid request. They quit too soon. Keep asking until you find the answers.” – Jack Canfield

20. “It is only a mere fallacy to say you are quitting when your heartbeat is in tune with the beat. A real change is a real change!”

22. “There is much more joy in being a survivor than been a quitter.” ― Omoakhuana Anthonia

23. “I’ve always made a total effort, even when the odds seemed entirely against me. I never quit trying; I never felt that I didn’t have a chance to win.” – Arnold Palmer

24. “Darkness should never be an excuse to quit, for with God, darkness is the exact stuff that light was built for.” ― Craig D. Lounsbrough

25. “The easiest mistake to make is to lose sight of your goal. Failure is temporary, but quitting is permanent. Choose wisely.” ― Kevin J. Donaldson

26. “People of mediocre ability sometimes achieve outstanding success because they don’t know when to quit. Most men succeed because they are determined to.” – George Allen

27. “Before success comes in any man’s life, he’s sure to meet with much temporary defeat and, perhaps some failures. When defeat overtakes a man, the easiest and the most logical thing to do is to quit. That’s exactly what the majority of men do.” – Napoleon Hill

28. “Quit while you’re ahead.All the best gamblers do.” – Baltasar Gracian

29. “Just don’t give up trying to do what you really want to do. Where there is love and inspiration, I don’t think you can go wrong.” – Ella Fitzgerald

31.  “At the end, someone or something always gives up. It is either you give up and quit or the obstacle or failure gives up and makes way for your success to come through.”
― Idowu Koyenikan

32. Quitting is a hiccup for losers. And down they go. – Lorenz Font

33. “The man who gives up accomplishes nothing and is only a hindrance. The man who does not give up can move mountains.” – Ernest Hello

34.  “Like creating a masterpiece, quitting is an art: you have to decide what to keep within the frame and what to keep out.” ― Richie Norton

36.  “If you’re planning on quitting, first make sure it’s not for one of these reasons: Fear, Discomfort, Anger, Self-pity, Someone’s negative opinions, Past failures, Unrealistic expectations” ― Charles F. Glassman

37. “Obstacles don’t have to stop you. If you run into a wall, don’t turn around and give up. Figure out how to climb it, go through it, or work around it.” – Michael Jordan

38.  “Understanding that quitting is never an option, leaves winning as the only option.”
― Edmond Mbiaka

39. “Never give up. If you want to be something, be conceited about it, give yourself a chance. Never say you are not good, that will never get you anywhere. Set goals, That’s what life is made of.” – Mike McLaren

40. “You’re going to find the people that make it work NEVER quit, quitting is NOT an option.” ― Bob Proctor

41. “Rest but never quit. Even the sun has a sinking spell each evening. But it always rises the next morning. At sunrise, every soul is born again.”

43.  “The word ‘quit’ is only for those who aren’t hungry enough for a successful life.”
― Edmond Mbiaka

44. “The best way to guarantee a loss is to quit.” – Morgan Freeman

45. “There’s no rule, no law, no regulation that says you can’t come back. So I have every right to come back.” – Lance Armstrong

46. “Fight if you must, work hard, give your best but never quit in the face of difficulty.”
― Sanchita Pandey

47. “Success can be defined in many ways but failure in only one … quitting!” – Gerard de Marigny

48. “I could’ve quit long ago, but there wouldn’t be nothing to quit to, unless I was ready to commit suicide.” ― James Jean-Pierre

49. “Pull yourself together. People among the living still need your help, and I haven’t given you permission to quit.” ― Ann Aguirre

50. “Fight the tendency to quit while you’re behind.” – Dave Weinbaum

51. “I make my practices real hard because if a player is a quitter, I want him to quit in practice, not in a game.” – Bear Bryant

54. “Nothing valuable or great was ever discovered by quitting.” ― Edmond Mbiaka

55. “I am not a quitter. I will fight until I drop. It is just a matter of having some faith in the fact that as long as you are able to draw breath in the universe, you have a chance.” – Cicely Tyson

57. “The problem with self-improvement is knowing when to quit.” – David Lee Roth

58. “Never quit on your dream, but learn to cut your losses and quit your plan if it is not working.”  ― Ken Poirot

59. “I have never met a successful person that was a quitter. Successful people never, ever, give up!” – Donald Trump

60. “There are no failures, only quitters” – Russell Simmons

62. “Don’t think you get nothing from quitting. You get guilt, anger, depression, confusion, etc…Never said they were feelings you wanted.” – Nicholas James O’Callaghan

63. “Talent is a wonderful thing, but it won’t carry a quitter.” – Stephen King

64. “When your own mind tells you to quit, you must ignore your negative thoughts and press on.” – Robert Kiyosaki

65. “Success … seems to be connected with action. Successful men keep moving. They make mistakes, but they don’t quit.” – Conrad Hilton

66. “Strategic quitting is the secret of successful organizations.” – Seth Godin

67. “Quit now, you’ll never make it. If you disregard this advice, you’ll be halfway there.” – David Zucker

68. ““Some men give up their designs when they have almost reached the goal; While others, on the contrary, obtain a victory by exerting, at the last moment, more vigorous efforts than ever before.” – Herodotus

69. “One of the most common causes of failure is the habit of quitting when one is overtaken by temporary defeat.” – Napoleon Hill

70. “Think about all the time, brainpower, and social or political capital you continued to spend on some commitment only because you didn’t like the idea of quitting” ― Steven D. Levitt

71. “Most people give up just when they’re about to achieve success. They quit on the one-yard line. They give up at the last minute of the game one foot from a winning touch.” – H. Ross Perot

72. “Effort only fully releases its reward after a person refuses to quit.” – Napoleon Hill

73. “The first time you quit, it’s hard. The second time, it gets easier. The third time, you don’t even have to think about it.” – Bear Bryant

74. “Success seems to be largely a matter of hanging on after others have let go.”
– William Feather

77. “It does not matter how slowly you go so long as you do not stop.” – Confucius

78. “The difference in winning and losing is most often not quitting.” – Walt Disney

79. “Effort only fully releases its reward after a person refuses to quit.” – Napoleon Hill

80. ““Don’t worry, I’m not quitting. I’ve decided I’m going to stay and make his life a living hell while I run his business into the ground.–Kim to Abe” ― Devon Rhodes

82. “Our greatest glory is not in never falling but in rising every time we fall.” – Confucius

84. “It’s not that I’m so smart, it’s just that I stay with problems longer.” – Albert Einstein

85. “Life is like riding a bicycle. To keep your balance, you must keep moving.” – Albert Einstein

86. “When you feel like quitting, remember why you started.” – unknown

87. “In the face of adversity, you find out if you’re a fighter or a quitter. It’s all about getting up after you’ve been knocked down.” – Archie Griffin

88. “Pull yourself together. People among the living still need your help, and I haven’t given you permission to quit.” ― Ann Aguirre

91. A winner is someone who gets up one more time than he is knocked down.”

94. “The greatest achievements of the human mind are generally received with distrust.”
– Arthur Schopenhauer

95. “Many of life’s failures are people who did not realize how close they were to success when they gave up.” – Thomas Edison

96. “Never give up, for that is just the place and time that the tide will turn.” – Harriet Stowe

99. “The harder you fall the higher you bounce.” – Author Unknown

100. “Never consider the possibility of failure; as long as you persist, you will be successful.”
– Brian Tracy