Team success or failure totally depends upon the team work. Proper teamwork can do great wonders, which in an overall helps the company and also improves employees capability. Working successfully as a team creates force, enhances resolve, wins challenges, and can even can increase productivity. 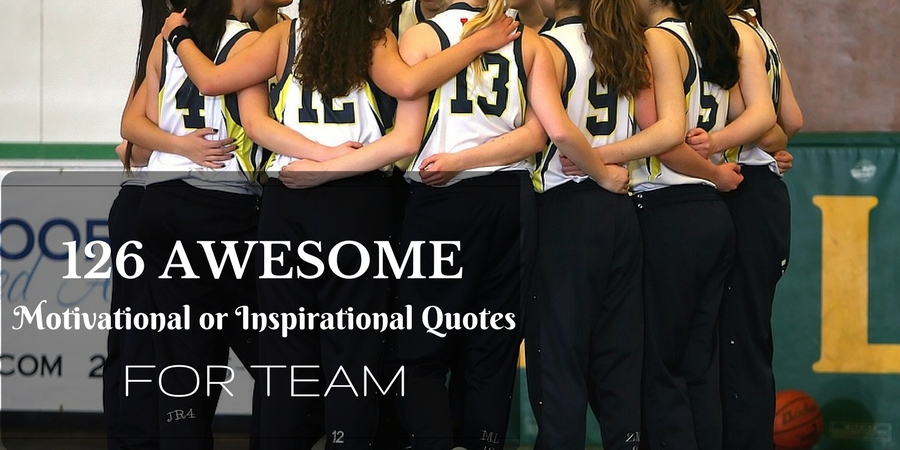 To move your team to unite as one and exhibit coordinated effort, we’ve accumulated some of our most cherished quotes on the strength of the team.

2. “Many of us are more capable than some of us, but none of us is as capable as all of us.” – Tom Wilson

3. “A single arrow is easily broken, but not ten in a bundle.” – Japanese Proverb

4. “Many ideas grow better when transplanted into another mind than the one where they sprang up.” – Oliver Wendell Holmes

5. “If I have seen further, it is by standing on the shoulders of giants.” – Isaac Newton

7. “No one can whistle a symphony. It takes a whole orchestra to play it.” – H.E. Luccock

8. “Politeness is the poison of collaboration.” – Edwin Land

9. “I invite everyone to chose forgiveness rather than division, teamwork over personal ambition.” – Anonymous

10. “Remember, teamwork begins by building trust. And the only way to do that is to overcome our need for invulnerability.” – Patrick Lencioni

12. “To collaborative team members, completing one another is more important than competing with one another.” – John C. Maxwell

13. “The best teamwork comes from men who are working independently toward one goal in unison.” – Anonymous

14. “Your attitude, not your aptitude, will determine your altitude.” – Zig Ziglar

15. “The achievements of an organization are the results of the combined effort of each individual.” – Vince Lombardi

16. “When your team is winning, be ready to be tough, because winning can make you soft. On the other hand, when your team is losing, stick by them. Keep believing.” – Bo Schembechler

18. “It’s a very important thing to learn to talk to people you disagree with.” – Pete Seeger

19. “You don’t get harmony when everybody sings the same note.” – Doug Floyd

20. “A team is more than a collection of people. It is a process of give and take.” – Barbara Glacel & Emile Robert Jr.

23. “We must all hang together or most assuredly we shall all hang separately.” – Benjamin Franklin

25. “Teamwork Simply stated, it is less me and more we.” – Anonymous

26. “A leader must inspire or his team will expire.” – Orrin Woodward

27. “If we were all determined to play the first violin we should never have an ensemble. Therefore, respect every musician in his proper place.” – Robert Schumann

28. “Lots of people want to ride with you in the limo, but what you want is someone who will take the bus with you when the limo breaks down.” – Oprah Winfrey

29. “Never doubt that a small group of thoughtful citizens can change the world. Indeed, it is the only thing that ever has.” – Margaret Mead

31. “Teamwork divides the task and double the success.” – Anonymous

33. “The art of life is a constant readjustment to our surroundings.” – Kakuzo Okakaura

34. “The higher a monkey climbs, the more you see of its behind.” – Joseph Stilwell

35. “The nice thing about teamwork is that you always have others on your side.” – Anonymous

37. “The best teamwork comes from men who are working independently toward one goal in unison.” – James Cash Penney

38. “In order to become a leading home run hitter, a batter must be surrounded by good hitters, otherwise, the pitchers will ‘pitch around’ him. Likewise, many successful people became that way from being on a good team.” – Laing Burns Jr

40. “A team is more than a collection of people. It is a process of giving and take.” – Anonymous

44. “With an enthusiastic team you can achieve almost anything.” – Tahir Shah

45. “Synergy — the bonus that is achieved when things work together harmoniously.” – Mark Twain

47. The only place success comes before work is in the dictionary.” – Vidal Sassoon

48. “Teamwork divides the task and multiplies the success.” – Anonymous

49. “It is not a question of how well each process works, the question is how well they all work together.” – Lloyd Dobens

50. “There is no such thing as a self-made man. You will reach your goals only with the help of others.” – George Shinn

51. “If at first you don’t succeed, you are running at about average.” – MH Alderson

52. “There is immense power when a group of people with similar interests gets together to work toward the same goals.” – Idowu Koyenikan

54. “Strength lies in differences, not in similarities.” – Stephen Covey

55. “The secret is to work less as individuals and more as a team. As a coach, I play not my eleven best, but my best eleven.” – Knute Rockne

56. “I don’t want yes-men around me. I want everyone to tell the truth, even if it costs them their jobs.” – Samuel Goldwyn

57. “Teamwork. A few harmless flakes working together can unleash an avalanche of destruction.” – Justin Sewell

58. “Overcoming barriers to performance is how groups become teams.” – Anonymous

59. “Teamwork is the lynchpin in our long-term success.” – Ned Lautenbach

60. “Individual commitment to a group effort – that is what makes a team work.” – Vincent Lombardi

61. “No member of a crew is praised for the rugged individuality of his rowing.” – Ralph Waldo Emerson

65. “You can’t build an adaptable organization without adaptable people, and individuals change only when they have to, or when they want to.” – Gary Hamel

67. “When he took time to help the man up the mountain, lo, he scaled it himself.” – Tibetan Proverb

68. “Interdependent people combine their own efforts with the efforts of others to achieve their greatest success.” – Stephen Covey

69. “No one can whistle a symphony. It takes a whole orchestra to play it.” – HE Luccock

70. “The ratio of We’s to I’s is the best indicator of the development of a team.” – Lewis Bergen

71. “So powerful is the light of unity that it can illuminate the whole earth.” – Bahaullah

72. “If a team is to reach its potential, each player must be willing to subordinate his personal goals to the good of the team.” – Bud Wilkinson

73. “Don’t worry about people stealing your ideas. If your ideas are any good, you’ll have to ram them down people’s throats — Howard Aiken

74. “People are definitely a company’s greatest asset. It doesn’t make any difference whether the product is cars or cosmetics.” – Mary Kay Ash

75. “Teamwork is the ability to work together toward a common vision.” – Andrew Carnegie

76. “Everyone is needed, but no one is necessary.” – Bruce Coslet

77. “A boat doesn’t go forward if each one is rowing their own way.” – Swahili Proverb

78. “We must all hang together or most assuredly we shall all hang separately.” – Ben Franklin

79. “Sticks in a bundle are unbreakable.” – Kenyan Proverb

83. “It is literally true that you can succeed best and quickest by helping others to succeed.” – Napoleon Hill

84. “Do you want to know who you are? Don’t ask. Act! Action will delineate and define you.” – Thomas Jefferson

85. “You do not lead by hitting people over the head. That’s assault, not leadership.” – Dwight Eisenhower

86. “It is amazing how much you can accomplish when it doesn’t matter who gets the credit.” – Harry S. Truman

87. “Unity is strength… when there is teamwork and collaboration, wonderful things can be achieved.” – Mattie Stepanek

88. “You don’t win with the best talent – you win with the five players who are able to play well together.” – Anonymous

89. “Teams share the burden and divide the grief.” – Doug Smith

90. “The way a team plays as a whole determines its success. You may have the greatest bunch of individual stars in the world, but if they don’t play together, the club won’t be worth a dime.” – Babe Ruth

92. “Individual commitment to a group effort–that is what makes a team work, a company work, a society work, a civilization work.” – Vince Lombardi

94. “Only by binding together as a single force will we remain strong and unconquerable.” – Chris Bradford

95. “The path to greatness is along with others.” – Anonymous

96. “Trust is knowing that when a team member pushes you, they are doing it because they care about the team.” – Patrick Lencioni

97. “It doesn’t take strength to win. It takes the true heart of the team to win.” – Emily Voyles

99. “As a team leader, create teams who: Care, Cooperate & are Committed.” – Anonymous

100. “Cooperation is the thorough conviction that nobody can get there unless everybody gets there.” – Virginia Burden

102. “Teamwork is working together — even when apart.” – Anonymous

103. “Getting good players is easy. Getting them to play together is the hard part.” – Casey Stengel

104. “A snowflake is one of God’s most fragile creations, but look what they can do when they stick together!.” – Anonymous

106. “The main ingredient of stardom is the rest of the team.” – John Wooden

107. “Individually we are one drop but together, we are an ocean.” – Anonymous

108. “A successful team is a group of many hands but of one mind.” – Bill Bethel

109. “It is amazing how much people can get done if they do not worry about who gets the credit.” – Sandra Swinney

111. “The best teamwork comes from men who are working independently toward one goal in unison.” – JC Penny

112. “I love teamwork. I love the idea of everyone rallying together to help me win.” – Jarod Kintz

113. “The path to greatness is along with others.” – Baltasar Gracian

115. “People who work together will win, whether it be against complex football defences, or the problems of modern society.” – Vince Lombardi

117. “There’s nothing wrong with staying small. You can do big things with a small team.” – Jason Fried

118. “The achievements of an organization are the results of the combined effort of each individual.” – Vince Lombardi

120. “People have been known to achieve more as a result of working with others than against them.” – Dr. Allan Fromme

122. “A group becomes a team when each member is sure enough of himself and his contribution to praise the skills of others.” – Norman Shidle

123. “Individually, we are one drop. Together, we are an ocean.” – Ryunosuke Satoro

124. “Great teamwork is the only way we create the breakthroughs that define our careers.” – Pat Riley

125. “The nice thing about teamwork is that you always have others on your side.” – Margaret Carty

126. “Find a group of people who challenge and inspire you, spend a lot of time with them, and it will change your life.” – Amy Poehler