Become a food critic means a job where he needs to judge the foods made by the reputed restaurants and deliver his verdict about the food and services provided by the restaurant.

Based on this verdict these restaurants seek popularity and negative publicity as well. It depends on the food critic, whether his critical comments will favour the restaurant success or not. Therefore, these food critics believe in being ruthless when it comes to analysing food as their job. 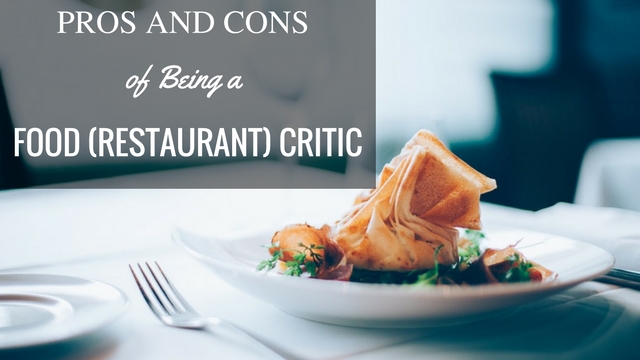 In a list of pros and cons of being a food critic the first thing which comes to mind is that the verdict given by these food critics can change everything for the restaurant. And the rest of the pros and cons are discussed below.

It is one of the prominent cons that a food critic can be exposed to. The food critic is paid to eat the various popular menus from restaurants and give an honest opinion about it.

Here, the quality of the food is the main priority and not the health of the food critic. This can be a problem since most of the food that the food critic eats is not healthy and nutritious and frequently eating such foods can lead to a considerable gain in weight and also an increase in the waistline.

Moreover, most food critic supervisors do not ensure to take care of the health of their employees. But on a bright side, if the food critic wants to watch his weight, he can do so by daily exercising and appointing a physical trainer at his own cost.

Hence, gaining weight being a food critic is a common thing. But it is not necessary that all the people working as food critic can gain weight automatically according to views of the food critic.

Therefore, it is necessary to understand that a food critic needs to watch his weight first then the taste of the services and food provided in the restaurant.

Most of the food critics start writing about food reviews way before they were even professionally hired and most of them even work outside their work hours. To be able to visit that many restaurants frequently, also means a lot of money has to be paid starting from the transportation costs, food bill and even the tax associated with the food. This means that food critics need a lot of money to go be able to survive in their profession.

Also, another point to be noted is that most people who employ food critics tend to only pay for a meal and to be able to eat full course meal, most food critics have to shell out money from their own pocket.

Becoming a food critic is not an easy task. And common people need to know that the food tasted by these food critics is ordered and also paid by them. And that is why being a food critic can be a little expensive of that person.

Therefore, a food critic needs to keep in mind that while providing his reviews on the food, he needs to have a look at his empty pockets. So that at the end of the time, a food critic can value the weight of his words.

It is possible that while tasting the food of the different restaurant a person can deliver his verdict about the value of their food on a ranking basis which is 1-10. Most of the food critics will get a chance to eat and savor foods from one of the most famous and most latest eateries and restaurants out there, and if by chance, if you are a famous food critic and someone notices you, most probably you will get a special treatment from them and they will even give you special services such as discount prices or even free meals.

Moreover, you can also create a social bond between the different restaurateurs and hotel owners by giving out a positive review of their dishes. This can also expand their professional and social network in the food industry by a large scale.

4. Opinions for close ones:

One of the most common things that are usually expected from every single food critic is his or her opinions about the food being dined and served by their closed ones. Sometimes it is treated as a pro of being a food critic, or sometimes the opposite.

Most of the people, who know a food critic personally, might even demand their opinions and suggestions about their food that they serve and enquire whether or not it is up to the standard of the food critic.

Friends and family members are usually the ones who ask for opinions, especially if one of them works in the food industry. These people might not like it when their food critic friend disliked the food that they served at their restaurant or their hotel. This might also lead to bad relations in the future because of the disagreements formed due to their occupations.

Many people think that the food critic is being paid a good sum of money for falsely praising the quality of food. This might be because of the fact that they are envious about the job nature of a food critic.

Moreover, a food critic needs to be impartial about his opinions about the services and the foods of that particular restaurant. Therefore, as compared to the rest of career areas a food critic might receive a lot of hate among their closed ones.

The food critic does not produce limited within the region of food, they also produce a detailed report about the various drinks at the hotel including alcoholic, non-alcoholic. How the food critic rates the restaurant also decides the amount of customers that the restaurant is going to get.

Most food critic can also manipulate their power to purposefully downtrodden the business of the restaurateur. This can also be a bad name for even the most honest food critics and can add as a con to the stereotypical image of the food critic.

Therefore, being a food critic contains greater chances of being at risk of life. Moreover, these food critics deliver their verdict courageous even without fearing their effects on the restaurant’s survival and existence.

Being a food critic, a person needs to learn to respect his time and money which is most common possession of the mankind. Therefore, it is necessary to work according to the necessary working deadlines. Most food critics are expected to cover restaurants in an area by visiting them, tasting their foods and also judging the ambience and the value for money.

After collecting all the necessary data, they are expected to present a detailed report about the food they ate, how it tasted, and how was the overall experience of the restaurant. They are also expected to provide an honest rating with a rating scale from 1 to 10, with one being the worst and 10 being the best. This can also make them feel that going to restaurants and eating food is not a once in a lifetime experience but as a part of the daily grind for their work.

When a person owns a thing on a life’s expense, then it is considered as one of the parts of the job. And when it comes to food critic a person need to understand that their efforts on making the food and services better can cause a lot of danger to one’s life. It is to be noted just by a simple review based on the food from a restaurant, a food critic can easily manipulate one’s lifeline, i.e., their restaurant.

Not only will this provide future problems to the affected, but it can pose as a danger also to the food critic. Many people perceive whether the food is good or bad at a restaurant without even trying them, just because they believe the words and reviews by the food critic.

Therefore, it is necessary to handle all sorts of work description of a food critic carefully. Moreover, being safe with words while providing review can make changes on their life’s expense.

While analysing the work of food and their services a food critic might find some sort of entertainment in his work. And that is why for a food critic enjoying all the restaurant drama can be considered as one of the highlights of his profession. Moreover, his profession can be too dangerous than the rest of the career areas.

Also, they also are liable to create a full review about the dining experience at the hotel he has been to. This also includes the entertainment and the various activities and services that the restaurant provides to its customers and guests. Therefore, it is necessary to handle the work of a food critic carefully for the welfare of a food critic.

There is a possibility that when a person appreciates about someone’s skill, then that person who is praising can be recognised as a person who takes care of people and ultimately positive person receive a lot of love from the loved ones.

Wherein which when it comes to a situation where a person keeps on shouting at the other person listing his flaws, then for sure that person can be considered as one of the negative people around. And that is why a food critic receives a lot of hatred among people in the way of his work.

Finally, the bottom line is that the pros and cons of being a food critic definitely delivers a verdict of mixed reviews. These mixed reviews help motivate interested people who really want to know more about these food critics and their nature of work.

Perhaps, for that purpose, they can read all the above-mentioned discussion about the pros and cons of being a food critic.