As the election season is slowly coming closer, many people start to wonder how they can be a part of this process. And in reality, even if you do not like to be working under a particular employer, the whole process of coordinating an election and its campaigns can be one of the most exciting jobs out there. 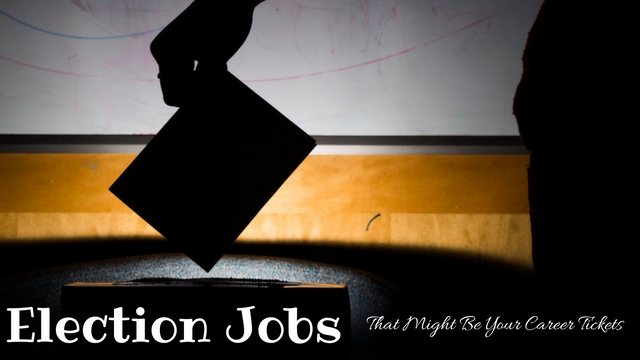 Many consider election campaigns as a soccer league, even though you aren’t a big fan of the game, the thought of teams having to compete with each other to get the trophy at stake is really exciting.

The main reason being that most of the followers of the election campaigns do not care who won at the end of the game, but they are really interested about all the events and happenings that had led them to win the final game.

Moreover, if you are working under a specific candidate, then your happiness will go through the roof if the candidate wins the election. Hence, if you are interested in modern politics and you want to have an exciting and thrilling experience then volunteering for a political campaign is the right option for you.

The job duties of a poll worker are assigned on the election day itself. Their main responsibilities include taking care and managing various poll duties and also supervising the fellow workers at the polling site.

Poll workers have a wide range of job and duties and they are the busiest people during the election day. Their duties include giving out ballot papers to the registered voters, registering the new voters, conducting background checking on them, ensuring that there is the correct number of voting equipment, checking the working of the equipment, explaining how to use the voting equipment to new voters, and helping the voting officials to count the votes.

The various responsibilities among poll workers are as follows:

Many poll workers are expected to work at least 12-14 hours a day and maybe overtime during the election day depending upon the strength of the votes and the number of people. An advantage of poll workers is that they are paid a large sum for the amount of work they do and in some cases, they might be even paid by the hour.

An election technology specialist specializes in various factors such as managing and troubleshooting electrical equipment failures especially in the case of equipment related to the voting equipment and the server, they also specialize in managing the database of the voters and ensure that there is no leakage of their personal info and create necessary protocols for information safety. They prevent any chances of identity and information theft from the database.

The various responsibilities of an election technology specialist are as follows:

This can be the perfect jobs for people who have a degree in computer science and who are interested in working long hours and are comfortable to work under pressure. In general the main purpose of the technology specialist at the elections is to oversee the fact that everything is going smoothly without any obstruction and hitches, especially in the hardware and software department. In some cases an election technology specialist is also the person responsible for recruiting, coordinating, training and managing a large number of full time and part time workers during the election process.

If you are an individual who prefers to work for a certain candidate instead of working for the whole election process in general, then having a job as the communications coordinator might be a suitable and preferable choice for you.

As the name suggests their main job responsibility is to make sure that the different teams working for an election campaign should be able to effectively communicate with each other and do their work more productively. There are many duties and responsibilities that these individuals have during the elections. These include:

This job is perfect for people who have a degree in journalism or they have any degree related to the communication filed such as a master in language or public administration.

As the name suggests the main job of a voter translator is to provide translation facilities to citizens who do not know the native language. They are basically used to help the new immigrants or helping voters who speak foreign languages in order to help them understand and solve their various doubts and queries regarding the election process and also to help them explain in how to use the electronic voting system if needed.

They are also the people responsible for informing the foreign voters about the various voting procedures that they should follow during or before the decided election day. If you are interested in helping others on how to vote and also know any foreign minority languages, then this might be the job for you.

To become an official voter translator the individual is expected to take a bilingual exam, after which they will paid hourly during the election day. They also help people who have a limited knowledge in English and have very little proficiency in understanding the English language.

If you are an individual who is experienced in managing customers, have excellent communications skills and you are very much passionate about the candidate then, this might be the perfect job for you.

The main function of voter outreach worker is to educate people of various walks of life about the candidate and explain what the candidate has promised for them to be fulfilled if elected for the position. They are also responsible for reaching out to the minority groups, college students and the elderly who are an important part of the election process and also constitute a good part of the voter’s strength. The various responsibilities that an outreach worker has is as follows:

As mentioned before, this can easily be one of the most thrilling moments of your life and you can easily experience the amount of competition and hard work that each worker does to make sure that the election day and the voting process is a huge success.

This might be also a perfect chance for you to meet a new group of people and maintain a good professional relationship with them. Not only will this make you love your election job more, but will also help you to encourage in working hard and provide productive results that you could be proud of. These jobs might not sound as one of the best jobs in the world, but they sure provide an experience worth the amount of hard work and time spent.